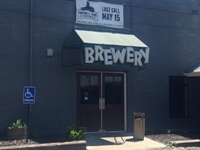 After a full day meeting it was a bit of a surprise to be directed to 75th Street Brewing by the Engineer that I had been working with on a recent visit to KC. So after a brush up at the Hotel my colleague & I drove out here, as it happened we were staying close by at the Holiday Inn just off Nall Avenue & the 435.

Situated on the Northwest side of the intersection between W75th & Wornall Road, the place is pretty easy to find. Frontage had a couple of large windows but it had a darkened appearance & to be honest had a bit of a rundown look to it. Parking is available around the back/side but it seemed limited - during my visit the entire parking lot was full of cyclists, so just getting into the lot was a challenge, but we found a spot despite the place being pretty busy around 6:30pm or so.

Entered through the back door that faces onto the parking lot, here there are some stairs which take you down a foot or so into the opened out but darkened interior. We didnt see anyone who could seat us, so we took the chance to walk through the place & try to make it look like we knew what we were doing. I soon found myself at the entrance that fronts W75th, here we were very quickly & politely greeted & asked if we wanted a table, service was on the ball, in no time we were shown to a table booth half the way back from where we came, no worries though, the interior is pretty interesting to peruse. In the centre of the whole floor is the Brewery itself, all neatly compacted & hemmed in with a dark wooden construction which has plenty of windows to show its charm but keep out the heat & germs of the punters. The Brewery itself is neatly displayed, but judging by the loose equipment laying around the interior, this is no polished show piece, it most certainly is a working Brewery, which is nice to see. Aside from the centre-piece, around this round tables with high stools litter the middle floor whilst a more organized arrangement befits the table booths set against walls & on an elevated part of the building on the West side. Just to your immediate left as you enter from the back entrance & down the stairs, I also noticed a play area of sorts inside the Pub too; three interior walls keep the brats under control whilst the Breeders can keep an eye from a distance whilst treading the boards, so it seems 75th is Offspring Friendly. The main bar sits towards the front against the wall & was fervent with activity for drinks to keep the servers supplied as well as the barflies. Lots of interesting Breweriana decorate the walls too; most of it looked to be Breweries past.

Beer menu is pretty good, you can go with a Six-Pack Sampler which is reasonably priced, or opt for either a 16oz or 20oz Pint, that I really liked, I miss the good old real Imperial Pint so I took the servers option to go for a bigger libation. Range is partly home-grown starting with the Royal Raspberry Wheat for the Cowgirls & Cow Town Wheat for the Cowboys. From there the range takes an influence from England with the Good Hope IPA & the oddly named Possum Trot Brown Ale. Ireland gets in on the act with the Muddy Mo Stout. Seasonal specials steal more Beer DNA from the former Czechoslovakia, Germany & Scotland. I tried the IPA which was good, even my non-beer drinking colleague enjoyed the hoppy bitterness in the Good Hope. I followed this with the Possum Trot Brown Ale which was suprb, a great partner to the Fish & Chips. This was all rounded off with a Muddy Mo Stout, a dry offering which had a creamy texture & an interesting use of Cluster Hops.

The Menu is pretty extensive, covering all the usual Brewpub favorites with yet more worldwide influence. Even though everyone knows that the best Fish n Chips come from the North of England i.e. Yorkshire, I opted for the Londons Best Fish n Chips. Nicely fried Atlantic Cod had crisp batter & the rough cut steak fries were just what the Doctor ordered, plus it was all brought to the table with a newly unopened bottle of Heinz Malt Vinegar without me even having to ask!! Its no Ritz but they do know their food here & serve it properly.

Despite the place being laid back the Service was spot-on, attended to us as we reached the bottom of our beers, & left us alone the rest of the time with the occasional check-in if she happened to be walking past us. Food & Beer turned up exactly as ordered & in a timely manner. Very good attentive service without the false niceness or interfering nature, it was pitched just right.

I really liked this place, neatly laid out to impart a Pub atmosphere if you're just drinking, but with quieter seating around the edges to allow a more personal experience whilst eating if you want that. I would have loved to have tried some of the Seasonal beers but all too soon we had to leave. I will certainly make it back out here for the London Fish n Chips & the Possum Trot Brown Ale the next time I am in town. Great value to boot.

This brewery is closed.

This brewery will be permanently closed as of 15 May 2016.

Tried out a handful of tasters with some friends that love a beer they had at a beerfest and was not impressed at all. I didn't try any food, but this place should have better beer if they have been around since 1993.