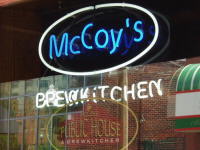 I visited McCoy's following the brewfest in Parkville, MO about a week ago. I was joined by BAs beerlovergirl, bditty187, and bluemooner. It was a very enjoyable and recommended place.

All in all, McCoy's is pretty big. There is a large patio in the front that faces out over Westport Road. Inside, the downstairs is very spacious with a large, U-shaped bar in the middle. There were people going upstairs, but I'm not sure exactly what is up there or how it is set up. They sell cigars here and have a decent size cigar and pipe smoking room. There are leather chairs and sofas and a large television. The decor didn't shout any particular or deliberate theme (sports, Irish, English). I like that. It just had a warm, cozy feel. It was pub-like, but also had the feeling of an old house.

I think that they had about six of their own beers on tap. I only got to sample the IPA and it was great. I agree with bditty that it is very similar to Goose Island IPA, which is one of my favorites. I wish I would have got to sample more of there stuff. On a side note, they were represented at the brewfest earlier in the day, but they were ill-prepared. At a five-hour festival, they were out of two of their four beers within an hour, and were completely tapped out after two hours. Very strange.

Food and service were both great. I only had a burger, but it was very good. The dishes that everyone else had looked delicious and seemed to be enjoyed all around. Our waiter was very attentive and friendly, but still very professional. I watched a few of the other servers and they appeared the same way.

A great place that I will visit again in the future. I hope that I get to sample more of their beers.

Another worthy Westport neighborhood spot....large outdoor space with a seperate bar, dark wood interior rooms...They brew their own tasty brews, offer a varied menu of quality and tasty chow and provide professional service to their customers....pleasant spot for a few beers and a meal...good spot to go with friends or a date.

One of the few beer joints in Westport I hadn't yet visited. Irish pub vibe, cozy dark interior... 11 house beers on tap, from amber cerveza to a gose and shandy. Nothing groundbreaking, but the Belgian IPA and Newcombs IPA we had were good.

Maybe not the most outstanding place in the area, but a solid choice for sure.

This is a large restaurant with eclectic wall decorations. The outdoor patio is quite nice. Quality is okay. While they produce a wide variety of beers which consume well with a meal, they aren't in-depth, well-refined beers. Service is fair to good, just depending on the night. Selection is typically pretty good with a focus on more session-able or friendly for the average-consumer. Food is good to great, just depending on the night. While it's certainly not the best place to eat in town, it isn't bad.

Neat spot right in the thick of the Westport neighborhood. It has the feel of a hotel bar, 360 degree bar, with probably twelve or more beers pouring. Odd scene on a Friday night, with a mix of beer people and going out type folks dressed up and not at all there for the beers. Apparently there is a club of some kind attached, and there is obviously some spillover. Made for an interesting vibe, good people watching and much more quiet than other places on the street, which I welcomed. I had the good farmhouse, and it was just that, good. Tropical notes and a lot if body, fun yeast, very alive. Other beers looked moderately less interesting, but everyone in our group enjoyed what they ordered. Bartender Ricardo was super nice, very inviting, appreciated his hospitality. I'd go back but maybe not on a weekend night, seems more suited to a daytime than a late night crowd. Beers were tasty though for sure, just didn't seem to be their only focus...

edit: this place keeps getting better, somehow seems more charming each time i go in. some of the better bar food around (for real!) and the beers are great. ursa minor brown is one of the best out, and they have nailed other basic styles too. do not overlook this place when visiting kansas city, its become one of my favorites there!

On a trip to KC with my family, we stopped in here for lunch on a Saturday. It was busy, but the staff was friendly and prompt. The food was excellent...I had a Mac and cheese with much rooms, asparagus, and cauliflower. The beer selection was varied, with a berlinner Weiss that was outstanding. The feel is pub like, and inviting. Lots of young people, but it still felt comfortable with kids.

Visited with my family over spring break.

Liked the pub atmosphere on the dining side. Seemed family friendly

Beers were alright, none of them were any I buy again

6 different kind of beers on offer, not that many, The coffee stout & quad were the most exotic

An alright place, but I see no compelling reason to go back

I have much love for McCoy's because it is where I got my start in the beer world.
Upon returning some years later, I can tell they are really in the groove. Pumping out some pretty excellent and unique beers that have developed and improved over time. Staff has good beer knowledge, and a line-up of veteran bartenders is there to answer the "beer nerd" questions.