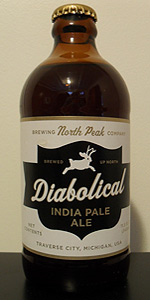 Notes: North Peak Diabolical IPA has hops from nose to tail. This IPA is unfiltered and dry-hopped with Michigan grown Chinook and Cascade hops. It has a smooth malt character and citrus pine aroma.
View: Beers | Place Reviews
Reviews: 168 | Ratings: 574 | Log in to view all ratings and sort
Reviews by tpd975:

A: Pours a murky orange brown with a nice tall rocky off white head. Excellent retention and thick chunky lace.

T: The malt is there up front. Sweet and bready with hints of caramel. The hops are mostly citric with a big bitter green dank finish.

D: Good I really liked this one.

Every now and then, I enjoy a "maltier than normal" IPA, and this beer checks that box. The pour reveals a copper-colored beer with some hop haze and a light tan head.

The aromas are piney hops with a significant toffee malt backbone, and the taste follows that. This would be a great tailgate beer on a cool October afternoon.

Purchased at a Meijer in New Baltimore MI. $10 for a mix a six from the fridge. 12oz stubby bottle served at 7deg C in a draught glass

A- Opens well and pours a small 1/2" high white head this is gone within a minute. Medium gold colour and filtered clear

S- Not a lot of hops here. Some malt

M- Creamy going down then dries out

O- Nice brew. Nice to try but will not buy again

My brother in law was kind enough to let me have a bottle of this. The beer poured a clear copper with white head that left some lace. The scent had hints of bitterness. The taste was bitter leaning and not overly easy to drink. There was some sweetness but it was not enough to balance. The mouthfeel was Fuller in body with good carbonation. Overall it's decent.

Serious suds, clear brassy hue. Thick hop resin and a toffee malt backbone line the nostrils. It has the bitterness of an IPA (with 66.6 IBUs), but balanced by the malt character. Some mellow harshness from the Cascade hops sticks to our palates from start to finish. Bready wheat flaunts some crispness. Not your usual IPA, but it sure is a hell of a lot of fun to drink.

Deep color color with a little head that is off white this dissipates quickly. The nose is not too heavy with hops, but at first drink you can taste the little bunches of hop goodness and from that pint forward I could smell them. The taste is light, almost just a hint of pine resin.

Good Beer for sure.

Heavier on the malts, lighter on the hops. The IBU/ABV listing is creative, have to give these brewers some points for quirkiness (66.6 IBUs / 6.66 ABV). Overall ok IPA that's worth a try, but nothing too memorable. Bottled on July 28 2015, bought from Trader Joes Grosse Pointe.

Appearance: Poured from an 11.5oz bottle into an oversize wine glass. Beer is fairly clear with a deep golden/amber color. There is a large creamy head that is kind of yellowish in color. Good head retention and significant lacing.

Smell: Fairly bitter aroma. Floral hops and citrus fruits are quite prominent. Malt and bit of alcohol are also present to a minor degree.

Taste: There is some pleasant hop flavor here, but the taste just seems a bit out of balance. There is a lot of bitterness, but not much in the way of malt richness. The bitter flavor transforms into a sour puckering sensation as time progresses.

Mouthfeel: The beer is medium-bodied, but considering the bitter nature of the Ale, I think that there may have been a little too much carbonation for my liking; it may have added to the dry, biting character as previously described. The bitter aftertaste also lingers a bit too long.

Drinkability: The drinkability is alright, and I think that the beer is pretty close to being a decent IPA, but with the balance as is, I don't think it's a beverage I could tolerate more than one or two of.

Very cool bottle design and a fair attempt for North Peak, but there are many other IPAs I would buy before this one. A couple of tweaks and it's a beer I might give a second go though.

I'm drinking out of the bottle, because it's summertime and drinking beer from a stubbie is a summertime activity. Anyway, I will pour one out and tell you how it looks and such.

Poured into a chilled beer mug. Lot's of cream colored foam. The color is a lovely orangey amber, slightly cloudy. Looks like an IPA. Smells faintly of hops, but it's very subtle when poured. In the bottle it smells of flowers and alcohol. Perfect. The head is hanging around nicely as I drink it. Overall the look and smell are very refreshing and satisfying.

The mouthfeel is very substantial. It slides over your tongue and lingers there. Definitely not a light beer. Chewy and satisfying.

The taste is fantastic. Nice bitterness from the hops, and a nice dose of the flowery, resinous flavor I like from hops. The sweetness of the malt balances well with the bitterness, but it's a very subtle maltiness. Not complex, which I enjoy on a warm summer day. The bitter and sweet flavors combine in each sip and neither overwhelms. This beer manages to be both interesting and exciting, and refreshing and subtle at the same time. Be careful! You can put down many of these in a sitting, and the proclaimed 6.66% ABV will kick your butt.

Overall, this is one of my all time favorite summer beers. It's refreshing, and flavorful, and substantial.

A: From a stubby little bottle, this beer pours a golden-orange color, which is very pretty and makes me think of autumn. A fluffy, 1.5 finger head sticks around forever. The lacing is splashy and sticky.

S: A very grassy hop aroma combined with a grainy presence meets my nostrils. There is a slight band aid aroma thrown in there, as well. I do not really detect any citrus character from Diabolical.

T: There is definitely a forward hop bitterness standard for an American IPA, but the flavor is somewhat one-dimensional. I taste a lot of the grassy-ness that I smelled (I know; I've eaten grass), but I get only the slightest hint of bitter grapefruit. An earthy, metallic taste is also present, as well as a little foamy, soapiness. I would like a little more sweet malt taste to balance out the bitter hops.

M: Pretty thin. I get a lot of the dry hop, alpha acid bitterness throughout my palate, but none of a sweet, coating sensation to complement the dryness.

D: With so many other delicious IPAs out there, I will not be returning to this one. For me, this beer is too one-dimensional with its hop dominant character. It's not awful, but not good enough to reel me in.

Cloudy amber with a big thick head lacing remains and coats the whole glass love the bottle me.

Pale malt a a slight crystal sweetness make the aroma not hops though.

Very English in taste all sweet almost artificial although not in a bad way the sweet is of a carapils malt tart and the finishes with a citrus bitter but the taste is all citrus in there end true my unique bujt not really an IPA.

Had originally @ Jolly Pumpkin in Traverse City. Bottled under North Peak Label for
some odd reason. I don't think the brewpub "North Peak" serves this... I'm guessing it is a legal issue.

A: Nice two finger head. Not very clear due to bottle conditioning and bottle style let some yeast in glass. Nice dark golden almost amber in color. Lacing is pretty good.
S: Some grassy hops, malts and bready yeast. Fruity esters.
T: Crisp bitterness from start to finish. Hops are a bit spicy and floral. Not picking up much citrus or grapefruit(which I normally enjoy in a IPA)
M: Mouth feel is just okay for me not super thin but a little thin for the style. Carbonation is light. Nice Bitterness up front but dose not linger.
D: This is drinkable for a 6.66% ABV beer. Seems lower alcohol is well hidden.

This was just okay for me. I didn't review when I had on tap @ Jolly Pumpkin in Traverse City, but seemed better than this bottle. I'm a sucker for a lot of citrus hops and a more lingering bitterness. Would not purchase in a bottle again.

An interesting bottle courtesy of kzoobrew- poured in a pint glass

Pretty standard look/pour with lots of cream colored head. The smell is a little underwhelmeing with small notes of pine, a hair of skunk, and some light malt smell. The taste is a bit better with some citrus up front and pine in the finish, decent bitter bite, sweet bready malt throughout. Decent mouth with strong drinkability. Not one of my favorite offerings but it is always nice to try something from a brewery I have never heard of.

D/O- Not bad. I drank this entirely too fast when it came to review this. I'd give it a solid B when overall grade is in question. The grenade bottle is right in front of me and it looks like something I'd want to fill up again.