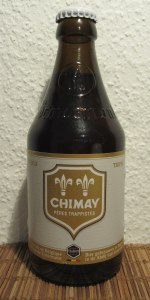 The Chimay Triple, which is the brewery’s most recent creation. It is golden in colour, and succeeds remarkably in blending mellowness and bitterness.

Smell :- Strong malt , light hops and a hint of honey like sweetness.

Taste . :- First impression is that this is rich , really rich , decadent rich . Bitter too , a bitterness that builds and builds and stops *just* in time to remain pleasant. There's wheat in this beer and you can taste it , the herbs and spices are there but in the background .

Overall:- Good , you can't really taste the flavour of alcohol but at 8% it sure is there . Pretty bitter but in a way that balances nicely. Distinctive wheat taste, fruit and spices in the background. No sediment of note in my glass . If you took a good wheat beer and gilded it you'd get something like this . It's strong ,rich and better for it . You'd want one but not everyday because it's a little bit special and it's a specialness that you'd want to keep .
A really good beer .

Mouthfeel is fairly light and crisp. A bit on the dry side. Overall, a fantastic tripel!

Rated by rugene from Canada (QC)

Strong aroma; I can smell it while pouring. Bready, light fruit, and spice. Sweet-ish.

The initial taste carries indistinct fruit - pear, perhaps, bread, floral, and peppery spice. A solid bitterness begins in the middle, along with some citrus, and continues into the finish and aftertaste. This is the most bitter of any tripel so far for me. The finish brings a bit of an earthy character. The level of bittering is in APA territory, which I was not expecting. In fact, the package of flavors, with the citrus, floral, and bitterness, is more APA than any of the other Belgian-style tripel ales I had. It is very tasty, but certainly different from others in the style. While the aroma seemed to promise sweetness, the finish is quite dry.

Mouth feel has a moderate body with the carbonation bubbles active on my tongue.

Overall, a tasty beer, nothing out of balance, but a bit of an outlier in the company of the other Belgian tripels. It definitely brings more from the hops (citrus and bitterness) than do the others.

Reviewed by ThreeFloyds from Minnesota

4.43/5  rDev +7.3%
look: 4.5 | smell: 4.5 | taste: 4.5 | feel: 4.25 | overall: 4.25
Lovely surprise. 33ml bottle purchased at grocery store in Belgium. Poured into IKEA 8 oz. glass. Surprisingly light, spicier and hoppier than I expected, and while you can tell there's a lot of malt involved, crisp, not sweet. Very smooth drinking and no alchohol heat - wouldn't guess it's a tripel. Not a lot of depth, but has the distinctive Belgian yeast banana-y flavors. A fastball right down the middle — nothing fancy, but a very nice example of the style. In the upper range of the 20-odd Belgians sampled this week.
Mar 29, 2022

A- A fairly clear golden copper with a two white head.

4.13/5  rDev 0%
look: 4.75 | smell: 4.25 | taste: 4 | feel: 4.25 | overall: 4
Sampling a 330cl bottle at cellar temp poured into my chalice. Picked up at a beer shop two weeks ago and in my cellar since then. L20-540 on the label is closest to a date stamp I can find.
The beer pours a rich copper color with lots of fine suspended sediment floating around. A fluffy dense head of bleached white foam rises up 2 cm and almost overflows the glass. This foam sticks around as a sturdy surface covering and leaves dense lattice on the sides of my glass. this lattice clings on throughout the tasting.
Aroma is some bready malts and fruity pear notes with a bit of general spiciness, never any booze notes.
First sip reveals a medium body with soft and gentle carbonation.
Flavor is some bready malt, green apple and pears and a bit of sweeter spices, maybe coriander. This isnt cloying or a candy sweet beer but Im not getting any sort of bite from hops nor peppery ABV. I just drank Allagash Tripel before this one and found these to be fairly different beers.

T - A mix of malt and dry hops. A good mix of light malt and light bitterness. The floral taste hops have a little sourness. The bitterness is more pronounced as you drink.

O - Overall this is a fine beer, but tried it immediately after the Chimay Blue, and this Chimay White was not as well-liked. I’m glad I tried it and would recommend it to people looking for a tasty light hoppy beer, but I’m not going to add it to my rotation.

4.26/5  rDev +3.1%
look: 4.75 | smell: 4.25 | taste: 4.25 | feel: 4 | overall: 4.25
Pours a hazy, amber colour. Even with the most careful of pours, a three finger tight and dense head appears, with another finger tall rocky, foamy head. This is my usual glass goblet, but I don’t know what happened, tons of bubbles are running up all over little spots on the glass. As if there were nucleation points on the side, which there isn’t. As I waited to pour the rest of the beer in, I realized… the head is not collapsing. Not after 5 minutes, not after 15, and not even through the whole half hour I drank this beer. Something happened I’ve never seen before which is that the head actually grew in the initial minutes of the pour and the rocky foamy head coalesced into the middle of the glass like an actual mountain. I don’t know if this was just some crazy unique thing, but it’s so gorgeous looking I honestly want to give it my first ever 5.

Sweet, delicious doughy yeast on the nose. Caramel malts, tasty spices such as pepper, coriander, a hint of cinnamon. A bit of banana and cloves here too. Sugared apricot for the fruity notes. It’s a Belgian, and even more it’s an abbey beer, they just always smell so good.

Taste follows the nose and then some. It is not disappointing at all. There is more balancing hop bitterness here than other Tripels, not citrusy, but a little bit grassy, funky and floral. Doughy yeast and moist, chewy bread flavours are unbelievably pleasant. Tripels and Quads can aim for a few different categories, some have those fruity esters like Westmalle, some aim for the sweet malt rum raisin flavours like Abt 12. Chimay White aims for a pleasant balance. There isn’t as much raisin, rum, dark fruit flavour here however, as the floral and mildly funky, wheaty malts balancing the sweetness and bitterness is more this beers thing. Gentle spices dance throughout the sip as well, mostly cloves. Mild funk adds a slightly savouriness to the beer. Toffee, caramel, and dried candy fruit rinds can also be tasted.

Pleasant and subtle finish that is dry in character, this beer is medium bodied with medium carbonation. Bittersweet on the palate as it dries.

Chimay White occupies a unique space in the Tripel category, but definitely deserves to be ranked higher. It stands out from the crowd and has its own little niche of flavours, enough to stand beside other unique tripels like Westmalle, Tripel Karmeliet, Rochefurt, etc. It’s not quite as malty and sweet as others, but still has pleasant chewy doughiness to it. It doesn’t have the deep molasses, rum, raisin character either, nor does it have tons of fruity esters. It’s very balanced and yet despite that still carries strong notes of its own character.

As for all Belgian Abbey tripels, it’s phenomenal. You really can’t ever go wrong with these brewers in this style!

Reviewed by HoppyBastard from Nebraska

APPEARANCE: pours a beautiful orange/amber color with two-fingers off-white head that persisted nicely until a thin, unbroken layer of small bubbles remained, heavy lacing on the glass, there are larger bits of suspended sediment when held us to light, medium carbonation.

TASTE: the taste follows the nose, initially sweet brown sugar, banana bread and spice then a subdued Belgian funk on the finish.

OVERALL: This is a really nice Tripel, it looks great in the glass and does not disappoint, Chimay is my favorite Belgian brewery (sorry Westvleteren), I would buy this again and would recommend to anyone who enjoys the style.

Reviewed by Apellonious from North Carolina

Kinda cloudy yeller, smells light and lemony and wheaty, tastes very bitter and sweet simultaneously, strong and hoppy, mostly clean and not too slick. Gut but not "$30 for 4" gut.

4.67/5  rDev +13.1%
look: 4.75 | smell: 4.5 | taste: 4.75 | feel: 4.5 | overall: 4.75
Pours a cloudy, deep amber coloration with a large, creamy head. Smells of caramel malt, toffee, estery/hoppy fruit with notes of apricot, apple and citrus, as well as hints of estery spice. Taste is a perfect balance of caramel malt, toffee, estery fruit and spice, with notes of red apple, apricot, clove and cardamon, as well as some bitter, citrus hops, with notes of orange rind. Finishes bittersweet, with a light/medium bitterness and some toffee, citrus and estery fruit and spice lingering in the aftertaste. Full mouthfeel with a medium/rich body and medium carbonation.

While I love Tripel Karmeliet, this has got to be my new favorite Tripel. The balance of malt, hops and yeast is just absolutely superb here, with some sweet caramel malt and toffee, bitter and citrussy hops, as well as fruity and spicy notes that complement each other incredibly well. I really like how prominent the hops are here, with some citrus notes and a good bitterness that prevents this from becoming too sweet against the rich caramel malt backdrop, while those fruity esters really stand out as well, with a good spiciness and great body and mouthfeel as well.

Reviewed by sjrider from California

Reviewed by Byron28 from Texas

Personally, I love the smoothness and balance of Chimay beers, they are some of the best.

I hope this is good, before I have had only blue and red :)

Very citrussy. Really overpowering, though also enjoyably intense. Better than Delirium Tremens as it has much more levels of flavour. Also, better than Duvel for the same reason. The balance of elements is mastered at a much higher level, this is a truly complex flavour on the tongue. The fizziness lasts for about a minute, and constantly changes taste. This is more than just a beer..! It is a creation of pure elegance and complexity.

Is there a bit too much bitterness and orange peel flavour..? For some people, yes. It really depends on one's tastebuds.

It does have elements of Duvel. Though it takes to a new level. However Duvel limited edition tripel that I had a few weeks ago is as good as this, though more apricotty.

For me Chimay are the best Belgian Trappiste brewers by far. Blue is still my favourite ; )