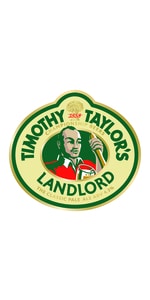 Notes: The drinkers’ favourite, a 4.3% classic pale ale with a complex citrus and hoppy aroma. A recent survey revealed that Landlord has the highest proportion of drinkers who call it their favourite ale. And it has won more awards than any other beer, winning both CAMRA’s Champion Beer of Britain and the Brewing Industry Challenge Cup four times. The ABV in bottle is 4.1%.
View: Beers
Reviews: 240 | Ratings: 530 | Log in to view all ratings and sort
Reviews by thehyperduck:

500 mL bottle from the LCBO; best before Jul 2022 and served barely chilled.

Pours a clear golden amber colour, supporting roughly one finger of foamy, frothy white head that melts away within the next several minutes. Lots of sticky, messy lacing is deposited in its wake, with its remnants including a thin, sudsy cap and a creamy-looking collar - quite attractive to look at. Doughy malts, graininess and honey sweetness on the nose, with hints of toffee, orange peel, apple flesh and tea-leafy hops.

A fantastic real ale, and shockingly flavourful at only 4.1%. Bready, doughy pale malts and light toffee sweetness at the forefront, with esters reminiscent of red apple and pear; later on in the sip, I get hints of orange zest, as well as a firm dose of leafy, slightly floral hop bitterness. Remains bittersweet into the aftertaste, with toffee, citrus peel and leafy hops persisting for a moment or two. Light in body, with moderately assertive carbonation that prickles the palate enthusiastically; a little bit more of a bite than I tend to expect from this style.

Final Grade: 4.34, an outstanding A grade. As its #1 ranking would seem to suggest, Timothy Taylor's Landlord is indeed one of the best strictly-to-style English pale ales I've ever had the pleasure of imbibing. Ridiculously quaffable and delicious to boot, this is a practically flawless session ale that I could see myself returning to on a frequent basis. Sadly, I have no reason to believe that this is going to be available long term - the LCBO brings in a lot of random imports, quietly delists them, and then I don't see them again for years. The takeaway here is I'd better stock up while I can, as English ales of this calibre are exceedingly difficult to find locally.

Pours a dull, hazy burnt orange with a loose, half inch, off-white head that gradually settles into a soapy froth. Nose is biscuity, with a hint of spice and a wet cardboard skunk. There’s also a suggestion of something sweet - perhaps honey. Taste consistent with nose with a trace of something metallic towards the back. Mouthfeel is light in body with an assertive carbonation that prickles the back of the throat between quaffs. Overall, not sure if this beer’s past it’s prime. It’s not bad, but definitely has some qualities that suggest it may be old.

My 2000th review. Bottle. Beer that has always intrigued me and randomly found on a shelf, fresh from across the pond. Landlord pours a clear, deep orange. Attractive, tan head. Very lacy. British yeast, which smells of apples. Caramel, toffee, biscuit malt. Floral hops and just a bit of sweet citrus hops, along with woody hops. The flavor is all of the nose but less sweet and more to my liking. More bitter than I was anticipating. Woody, slightly citrusy and grassy hops. Bakery-medley malt with caramel additions. Fruity and apple-dominated yeast. Gets better as it warms because a good Brit beer isn't served cold. Far more body than a beer of such light alcohol should be able to possess. Massaging bubbles. Landlord makes me want to shout "ALE" in a British accent. This is a definitive U.K. ale to me. Cheers to my #2000; this was a cool beer for the liquid inauguration.

S: Caramel malts and a slight hop presence... but mainly that beautiful caramel shines through on the nose
T: Beautiful malt character shone through with just a restrained hop flavour and mild bitterness.
M: Medium mouthfeel, low to medium carbonation and finishes dry
D: After drinking not much else but APAs and IPAs it was a refreshing change and the catalyst to start tasting some malt driven beers. Could see a few of these going down quickly in a session. Nothing too much in your face... just really well balanced... something i'm keen to continue to experience.

Poured into an English pint glass, the appearance was a burnt orange/copper color with a finger’s worth of white foamy head that slid off fairly quick. Stringy soapy lace. The aroma had some estery sweet floral hops over top of buttered biscuits, somewhat cracker-like/touch of herbal. The flavor was moderately sweet pulling the malts in front to even the keel of the overall taste surrounding the hops. Aftertaste was quaint, somewhat malty, buttery and soapy. Finish was quick and malty. The palate was between light and medium bodied with a fair sessionability about it. Carbonation felt low but expected. ABV felt good. Overall, pretty good bitter with the diacetyl controlled enough to not be distracting. Probably be a good one for Americans to give a shit before delving into the world of Bitters.

A - Clear copper body with a fairly tightly-bubbled head that dissipates fairly quickly, leaving a thinner creamy head and cling.

T - Sweet biscuity malt takes the lead on the taste with fruit notes following, but not sweet. Finishes with a bitter hit on the end that begs for another sip.

O - Overall, this is an outstanding beer which is low enough in alcohol (4.1% ABV) to work perfectly as a session beer, or even on its own.

T - malt, toffee and honey, quite sweet at first fading to a nice bitter finish.

Mouth is med bod, medium to higher carb which is a little high for the style

The more I drink English Pale Ales the more I become enamoured with their relative simplicity and charm. It is as such that I found Timothy Taylor and his smiling Landlord holding a pewter tankard of what one can only assume to be the fine beverage, and I hope to be as happy as that Landlord soon enough.

A: This one presents itself with a clear amber body and a 1cm off-white head that stands fairly well, don't often see head on an EPA, it's a nice change of pace.

S: Floral hops, reminiscent of Fuggles if I'm not mistaken, abound with a mix of biscuit and caramel malts and an almost bread-like yeast thrown in for good measure.

T: Sweet upfront, slight buttery diacetyl with a chewy caramel malt middle followed by floral hops. Big flavours (as long as you drink it at the temperature prescribed on the back of the bottle) for what is essentially a mid-strength, in Australia anyway, beer. The malts begin to steal the show from the hops as it warms so bear that in mind.

M: Medium bodied with light carbonation, as a good EPA should be.

D: Calling it a "Strong Pale Ale" might garner some negative reaction from boutique beer drinking quarters, however one thing to remember is that compared to most EPA's this is strong in flavour. It's certainly not as subtle as many pull tap ales I've had in the UK, so in that respect "Strong Pale Ale" is befitting of this brew. The only points I would deduct is cost, again there are UK breweries that do decent (if not better) ales at a lower cost, e.g. Harviestoun and Hook Norton are two off the top of my head, otherwise a great EPA here.

A - Clear, golden orange with a white head which started off big, then faded. The head was still there but fairly thin. Small, tight bubbles.

S - Fruity, yet clean; almost lager like. Very crisp in the nose. A touch of grainy sweetness mixed with English hops; reminiscent of a pilsner.

T - Malt sweetness quickly gives way to earthy English hops. Nice touch of fruity esters in the background mixed in with the hops, which provides a pleasant balance. A touch of caramel and slight mineral in the after taste.

M - Light body but carbonation provides creaminess and prickliness on the tongue. No detectable alcohol warmth.

O - A flavor packed English bitter for a relatively low alcohol beer. Refreshingly bitter, makes you want to come back for more. Fantastic beer that I'm glad that I finally got to have.