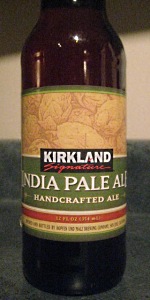 this isnt bad, middle of the road for the box, the pils is still the pick i think in terms of overall quality, but i liked this well enough, especially as a first beer of the day, or close to it, where it doesnt need to follow something more modern and heady. this has a decent malt foundation, lightly brassy colored, perfectly clear, and holding a thin inch of white head, looks nice in the glass. it smells a bit basic in terms of the hop profile, but its fresh and bitter, and there is nothing too cheap or metallic about it, which immediately puts it ahead of the session ipa that was also in this box. the hops dont have a ton of flavor, slightly piney, northwestern, woodsy, old school to me, but its light enough to be very drinkable. some mild sweetness through it from the grain, all very basic to me, but the proportions are right, this does have a pretty quick finish, and it seems clean on the fermentation. for less than a buck a beer, i cant be too critical of this, or any of them, its great value, but this is pretty reasonable all up.

I like this description the best:
Brewed and bottled by Bricks and Barley Brewing Company in Steven's Point Wisconsin. Served from bottle into glass at home. Pours deep gold in color, medium clarity with well developed white head. Fairly weak herbal hoppy and pale malt aroma. No fruit, citrus or resinous aroma detectable. Flavor is also mild: some earthy hoppiness and malty sweetness. Medium bitterness at the end. Medium bodied with mild carbonation. Overall a weakly flavored IPA with little in terms of hop aroma or flavor. Drinkable but completely unremarkable.
Definitely unremarkable. The only thing going for it is price. But the labels come off easily, and the bottles are good enough to reuse in home brewing. Definitely a West Coast style....

L: Pours a brilliant gold color with a medium white head and thick lacing all around the glass.

S: Earthy and piney hops mix with some notes of pineapple and orange, and some sweet malt, smells like a old school west coast IPA

T: Piney and dank hops, mix with some tropical fruit and medium bitterness, that all doesn't just quite come together.

O: The taste of this one is a below average IPA. Smell is nice and it looks nice.

Again, no need to hate this beer just because it’s from Costco. On the contrary I’m trying to see its bright side, that Costco asked this “Hopfen und Malz” brewery in San Jose to make this line of beers for them. Reminds me of the craft beers I had in Budapest, Hungary with the heavy malt character.
It’s not THAT bad. I think you should not drink it with having expectations of a true craft beer. It’s good for what it is - a Costco brand beer. When will you have Walmart brew something like this? It is better than Coors et al.

Well I bought a mixed case at Costco in Puerto Vallarta Mx, a big mistake. The IPA pours somewhat flat looking the nose is dank but seems off. The taste is bitter but very stale. All in all a cheap junk beer.

A big foamy head quickly gave way leaving lacey bubbles on the glass. The color is caramely and slightly cloudy. There are a few carbonation bubbles rising from the bottom of the glass.

The smell is hoppy yet slightly metallic.

The taste is hoppy but balanced with malts. After you swallow there is a pleasant but bitter hoppy after taste.

The mouth feel is crisp and biting which I enjoy.

Can't beat the value of this beer. But I wouldn't go out of my way to seek it out.

TooLucid from District of Columbia

Bottle for bottle Kirkland beers are less than half of the price of 'regular' craft beers. But far better than half as good. I got a 24-pack at Costco for $20 with six porters, brown ales, IPAs, and APAs. Not bad. All-in-all it's not a bad beer, and rather good for the price. There is nothing special about it either though. It's as 'standard' as can be, but it's balanced and goes down well. Same for all the varieties. I'll pick up a case again. It isn't good enough to hit that itch but it is good enough to drink later in a session after a couple more expensive craft beers.

I picked up a case of the mixed pack from Costco because I was there and the beers were less than a dollar a piece. Good enough reason to check it out.

Pours a golden and light copper color, 1/2" white head with below average retention. Aroma lacked dry hopping, one of the more expensive aspects of an ipa these days, so I have already established a major reason for the low price.

Taste, leans alpha acid high bittering hops, toasted pale and crystal caramel like malts are heavier than desired. It isn't balanced, because there is a lot of that grapefruit bitterness. Not much else flavor wise from the hops here. There aren't off flavors, but simply dropping a 70 ibu bitterness and no other flavor really is tired in 2017. As a result, almost everything in an ipa falls below average.

If all you want is a bitter beer, than go for it.

Goldish orange in color, slightly cloudy. Thin white head. Hoppy, orange-peel aroma with a hint of biscuit. Taste doesn’t do much, slight hints of tropical fruit and earth. Grippy finish on the front end, lingering coating of the palate on the tail end. Decent beer. Not remarkable in any way for an IPA but it’s not terrible.

From a bottle, purchased in a mixed case at Costco, into a pint glass. "Brewed & Bottled by Hopfen Und Malz Brewing Co., San Jose, California." Note that the label states the ABV is 6.9% by volume (75 IBU), unlike the data provided by Beeradvocate (which says 6.50%), so I'm wondering whether the recipe has changed over time. Also, the label has changed.

The beer is clear and golden, with an above-average, lingering head. There is plenty of malt/grain flavor, well-roasted. For an IPA, it's slightly less hoppy than average. While there is a trace of bitter aftertaste, it isn't offensive at all. Overall, it's a competent beer, in the average range for an IPA, which means it's a great value due to Costco pricing. Recommended for enjoying at home.

It has a slight bitterness of an IPA but it doesn't have much else, it is a less flavorful beer, not bad for a day of drinking.

Taste Rating in Words: It's a long car ride with the appropriate amount of stops to stretch.

A west coast style IPA to me. The abv is 6.9% so maybe they tweaked the recipe and increased it from 6.5%. This one and the double bock are the keepers in the sampler pack.

As others noted it is more of a pale than an IPA, but still a decent little session brew
none the less.

I don't know why this is classified as an American IPA instead of just IPA but whatevs.

Generous head quickly fades leaving light lacing. Flavors are quite good and balanced. Malts are fruity and have light drop biscuits taste. Hops are slightly piney and feature agreeable citrus notes. Carbonation is not noticeable- which is to say perfect.

Too muted to recommend. Drinkable but not flavorful. More in line with a Pale Ale than an IPA.

L - pours clear amber with an inch or two of head that sticks as it lingers to a thin lacing.

S - sweet, metallic, butterscotch, some citrus but none of the pine that a traditional "west coast" IPA offers.

T - much like the smell, tastes of sticky-sweet caramel, bready malt, orange, not a lot of hops up front or at the end, so it's more of a pale ale than IPA. Good, but not what I'd classify as an IPA.

F - Medium bodied, thicker probably due to sweetness, slight carbonation, not much bite. Reminds me of Full Sail's version of IPA.

O - It's fine for a Costco beer, but too similar to the Pale Ale they offer that this could use some work. Drinkable but not a go-to IPA by definition.

Kirkland IPA sampled march, 2017. This is yet another beer carrying this label, now brewed in Stevens Point WI. This is 6.9% alcohol and claims 75 IBU, with a $20/case price. Poured at 45F into a short glass. Nice balanced aroma, short (and shortlived) white head and medium amber liquid. Hop forward with good bitterness and some modern fruity/flowery hop flavor. Just enough body. Aftertaste is pleasantly bitter. Overall very drinkable and tasty. The rating is of this Stevens Point product.

Below is my review of the Matts version of Kirkland IPA done in early 2016.

First, I doubt that the "west coast" Kirkland tastes like the "east coast" Kirkland. The eastern beers are by Matt's in Utica and (to my palate) taste a lot like the Saranacs, which I think are generally OK (Pale Ale)to excellent(4059 Porter). This is a pretty good Ale with medium body and taste, at a great price. It hasn't been stocked in a while, and I'm hoping it comes back. (my rating for the Matt version was 3.31)

Pours fizzy, clear amber with foamy, well-retained off-white head. Aromatically hard to define. As much evergreen as it is citrus. Overall, it is perfumy but not strong. At first taste is sweet and floral, but then more herbal, vegetal, but not dank. IBUs are 77, tastes lower to me, so I'd say it's well-balanced. Malt noted on into the lightly bitter finish. Highly carbonated, watery, and crisp, but smooth.