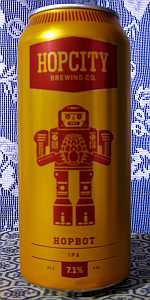 The Citra, Centennial, Mosaic, Summit and Willamette hops are perfectly balanced by a solid malt backbone.

From August 2015. Scored this in Oregon.

Pours a solid copper color with 1/4" white head. Maybe a tad maltier than your average ipa these days. Even though it has Mosaic and Citra hops, they don't make a big punch through aroma wise, they might be here in relative minority proportions to the other 3 hop varieties. I'm getting just as much centennial pine, grapefruit notes as I am anything of a sweeter citrus or tropical fruit sense, not to mention the relative sweetness honey like of the caramel maltiness.

Taste offers both a firmer, sweeter malt bill to interact with the bittering hops. I'm also not pulling much if any Summit hop notes out of it. Willamette's earthiness and Centennial's bittering grapefruit like notes are the most pull on the beer. The caramel isn't excessive, it firmly bonds with Centennial. Hit of a bitter/alcohol light sting, but it lets you know you're alive. The commercial tug job knows what people wanna read, but it is a little more old school than that in reality. Good enough to try and not be disappointed, but no reason to seek it out again either.

Can, undetermined date:
A nice, clear amber beer, maybe leaning a little darker amber. A nice wide collar of near-white bubbles adorns the surface as I take my last sips.

The nose initially leans more American barleywine, with a raisin and dark fruit sweetness that is countered by a light grass and pine needle bitterness that seems like it could have some oxidation. The taste doesn't lean as sweet as expected, thankfully. The caramel malts have their say, but the bitterness keeps them at bay. The hops have more of a spiciness to them than I would've guessed from the nose. They also do little more than balance the beer initially. They grow a little more aggressive as the beer warms.

A very clean beer where the malt notes are more distinct, but there is a subtle bitterness that takes some time to make its presence felt. I slowly enjoyed this more as the beer neared the bottom of the glass.

One of the best Alcohol / dollar ratio packed in IPA goodness.
Can't go wrong with it!

Copper, hazy with no carbonation and 2 fingers of creamy, off white head.

Poured from a can into a tulip glass. Decent head that lasted well. Pours organe caramel with semi transparent look. Nose is weak on this one - some citrus, fruit but weak overall. Fair enough taste but Beau’s is a better choice here. american style are hard to come by in Ontario so this will do in a pinch.

Thanks to a coworker for this one.

Nose is caramel, brown sugar, resin and citrus. Real aromatic. Sweeter than I like but its solid. Beer opens with hints of tea and bark. Sweet in the middle. Touches of caramel, brown sugar, more black tea leaves and bark. There's a lot going on here but its not my type of flavor profile. Body is medium with ample carbonation. Filmy and thick in the mouth. Not really appropriate for the style.

Not a fan of this one. From the aroma, to the taste, to the feel, it was all wrong for me.

S: Not the strongest smell but floral and fruity. Smells like a blend of citrus fruit juice without any typical beer smells.

T: Not your typical strong IPA bold crisp hoppy profile, the malt is very pronounced, likely even more than the hops. The malts have a toasty caramel flavour and the hops are lightly indistinctly citrusy and rindy. Nearly no bitterness or dryness. The higher alcohol content isn't noticeable at all from the taste.

O: Not the punchy hoppiness I was expecting but I was pleasantly surprised by the maltiness. It doesn't seem to be overly complex but it is a very enjoyable and easy drinking beer despite the higher alcohol content.

I had a ton of citrus in my pour. I was in Toronto and decided to give it a go. I love the west coast US hops and citrus flavor. I will see if I can find it in the states.

Really weak IPA based on the description. Loads of caramel mask the hops, not getting any of the "waves of absurd citrus and tropical aroma and flavor" Change the description to English IPA or how IPA's tasted in the early 2000's and you have a winner.

New thought I will live this kind of beer. This is one of the beer I drink often, The Hop mixture is perfectly brewed.

I began this latest quest on Monday, which was Canadian Thanksgiving Day, by scouring my backlog to see what Canadian beers might lay in wait. Unfortunately for my plans, two of the first three were a**kicking AMLs from Labatt & then I was on a planned expedition on Tuesday. This is less hair of the dog and more like the horse that I rode in on. This is also my last Canadian beer for the foreseeable future as I work on the rest of my backlog.

From the bottle: "Craft with attitude,"; "Programmed with 5 West Coast American hops, HopBot IPA brings out waves of absurd citrus and tropical aroma and flavor. The Citra, Centennial, Mosaic, Summit and Willamette hops provide 70 IBUs which are perfectly balanced by a solid malt backbone."

I Pop!ped the cap, which was a pleasant feeling & I did a gentle pour for on other reason than it was early & I did not feel like cleaning up a mess, if one occurred. An in-glass swirl raised a finger of dense, foamy, tawny head with good retention. Color was Deep Amber/Light Copper to Copper (SRM = > 13, < 17) with NE-quality clarity. Nose smelled more strongly of earthy malts than of all of the hops being touted on the label. Hmm. Mouthfeel was medium. The taste was an unexpected jolt of especially resinous pine hops, initially, followed by a wash of tropical fruit flavors like mango, papaya & guava and underlain by a more earthy than biscuity malt flavor. Wow! Well, if I was not quite awake before, I definitely am now! Phew.

Now, here is my conundrum - Mitch Steele has recently been quoted as saying that (A)IPAs have become too prevalent and some are too hoppy & bitter to be enjoyable. Hmmm. As a self-described, self-avowed hophead, I almost always derive enjoyment from precisely the sort of thing that Mr. Steele is describing. That was certainly the case here as the hops were pretty unrelenting, but I did not feel that they were overdone/overused where I have encountered that in some AIPAs. I mention this only because I am skewed in favor of hop-driven beers, plus I try to find something to like in a beer, rather than looking to fault the brewer. Yeah, it makes me a lenient rater, but that is why I always include a review - I want to qualify my quantifications.

The finish was dry, but I would not call it outright bitter. The term "juicy" gets used a good bit and I feel that it applies in this case. The citrus fruit flavors especially lingered and the pine flavor was more resinous and minty than bitter. I liked it well enough and having seen one reviewer's mention of it coming in a CAN, I would definitely revisit it, given the opportunity.

A nice amber near-clear IPA with a decent blend of hops & malt which gives a hop forward taste with a well balanced biscuity sweetness to keep the bitterness at bay, although it peeks through on the finish. Notes of pine, floral, citrus, tangerine, melon all combine in a sweet/smooth moderately light hop rush which give way to just a hint more bitterness on the tongue than I'd like at the end. One of the better Canadian IPAs I've had but can't quite match the flavour or balance of a Heady Topper or Lagunitas Hop Stoopid. This rivals for the best IPAs available from the LCBO.

Got this one at the LCBO this past summer.

From a can into a snifter
IBU: 70
Hops: Citra, Centennial, Mosaic, Summit & Willamette

APPEARANCE: Pours a 2+ finger, medium looking, creamy white head with great retention. Clear burnt orange with next to no carbonation. Head slowly fades to a foamy cap and clings to the sides of the glass. A splotchy wisp remains leaving touches of lacing as the glass empties.

PALATE: Medium body and medium levels of carbonation. Slightly foamy on the palate, goes down fine and finishes a bit dry. Some bitterness lingers.

OVERALL: Pretty decent. A good nose on this one and the flavor is pretty enjoyable as well. The feel could be less foamy but it doesn’t detract from the experience too much. A good beer from Hop City. Cheers!

Overall - I really enjoyed this beer, the tropical flavors mixed with the hops made it stand out.

It's very cheap in France (1.8 €), especially for an IPA from accross the Atlantic. But for the price, it is quite good. Solid hop aromas, it is up there with let's say, Brewdog's Hardcore IPA, for less than half the price... It is also, I think, much better than other American IPAs we can find in shops in France, like Lost Coast, again for half the price.