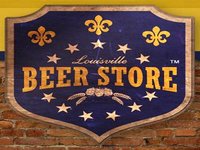 Notes: Per Social Media they are "Temporarily Closed" but remain closed at this time.
PLACE STATS

Reviewed by sefus12 from Massachusetts

4.85/5  rDev +15.8%
Louisville, despite it's location in the middle of bourbon country, has quite a developing craft beer scene and nothing shows that more than the Louisville Beer Store. Lori and Tyler (owners) are almost always on hand behind the bar and both know a ton about beer, especially imports.

The store is a bit small and can get cramped on weekend nights and during some of their tasting events (more on that later) but there is a nice patio area out back to enjoy when weather permits.

Their selection is as good as you will find in the city and the ability to buy singles of everything makes it even better for those who enjoy trying new beers. There is also an 8-tap system which always has a great selection of both American and import craft brews on. Currently they have DFH Burton Baton, Mikkeller Santa's Little Helper, and Gouden Carolus Noel 2008 Vintage on draft, amongst others.

The store also has a ton of tasting and educational events as well. Within the past few months Sierra Nevada, Upland, and DogFish Head have all had tap takeover events there and Upland even had a keg of their barrel-aged Teddy Bear Kisses for the patrons to enjoy.

Price is a touch higher than the local Liquor Barns but you expect that in a bottle shop. I'm a big proponent of growing the Louisville beer scene and the Louisville Beer Store has certainly helped with that. It's a treasure for the city and a place I recommend any beer fan visiting Louisville to check out.

Reviewed by JeffRoKY from Kentucky

4.26/5  rDev +1.7%
vibe: 4.5 | quality: 3.75 | service: 4.75 | selection: 4.25
After recently stumbling upon this place, I'm please to say it is a quaint, inviting watering hole.
The selection, while not extensive, is very impressive. And the staff is attentive, informative, and very friendly.
They also have a nice beer garden in the back, where you can kick back and enjoy your "pint of the day".

Reviewed by macher0 from Kentucky

4.43/5  rDev +5.7%
vibe: 4.5 | quality: 4.5 | service: 4.5 | selection: 4.25
This place has whatever is in town at the moment, but also an excellent foreign selection, especially sours. Always good recommendations and while a limited amount of taps, always good stuff. They also own Holy Grale and I presume whenever the big dogs come around(Cantillon, Framboos, etc.) they throw a lot to the Grale (on premise consumption and higher price), all in all a good problem to have. This should be at the top of everyone's list when visiting Louisville.
Jul 04, 2015
Rated: 4.29 by MarshallBirdhouse from Kentucky

Reviewed by pigpen892 from Kentucky

4.5/5  rDev +7.4%
This is what a beer store should be. Great staff, great beer, great location. I enjoy that the staff are just as knowledgeable as they are friendly and helpful so I'm almost always sure to get a delicious beer that I may have never known existed. If you love beer and are in Louisville, you want to go here.
Nov 01, 2014

Reviewed by themind from New Jersey

4.9/5  rDev +16.9%
This place rocks! killer selection of brews I cannot get in Jersey. The staff was top notch and knowledgeable. I will absolutely visit this place again. I can't stress enough the cool staff when I was there in October 2014. Recommended!
Oct 16, 2014
Rated: 3.75 by McMatt7 from Pennsylvania

Reviewed by PBRmeasap1980 from Indiana

Reviewed by SD-Alefan from South Dakota

3.88/5  rDev -7.4%
vibe: 4 | quality: 4.25 | service: 3 | selection: 4.25
Nice bottle shop with lots to choose from. Plenty of great American craft and a very nice import section. Cans all seem to be in the cooler. Tap selection was nothing special on my visit. Service was about nonexistent and they were out of carriers. Food is snacks only and I did not try any. I don't think there are any real bargains here but prices seemed about normal for a mostly singles-only shop.
Jul 24, 2014
Rated: 4 by gabeerfanswife from Georgia

Reviewed by ZombiesAteMyDog from Indiana

Cheese and crackers (and maybe nuts?) are the only food go speak of, but it's locally made and also good.

The patio Is a nice place to go enjoy some brews with friends... Includes a fire pit.

It's the only place in town where you'll be able to find many European brews, but they are a bit pricey.

Reviewed by Kappakoosh from Texas

4.5/5  rDev +7.4%
vibe: 4.5 | quality: 4.5 | service: 4.5 | selection: 4.5
I thought this place was going to be the typical craft beer spot, but man it wasn't what i expected. You want to pop a top the moment you walk in. Staff was friendly and very knowledgeable, patrons were friendly and the beer selection was ridiculous. If you ever make it to KY, I suggest you stop by and have a brew and perhaps walk away with a bag full as well. Nice Place.
Jul 08, 2014
Rated: 4.75 by Guitars_and_beer from North Carolina