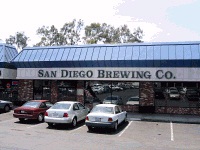 Fellow BA xlperro drove his friend Chuck, myself & EyeChartBrew here during our recent Pub-Crawl of S.D. After the visit to the rather quaint Alpine Brewing Co., & a handful of 4oz samplers, we headed here for our 2nd stop of the day.

Inside, the L-Shaped Bar takes up much of the back wall & the left hand corner. To your right there are some tables & a reasonable sized seating area in front of a partial front wall. We headed for the open area in front of the bar that lies behind this partial wall, sitting next to the Table Football game. The high table & stools gave us all an Eagles view of the surroundings, & more importantly, the beers on offer. The beer range I noted was certainly interesting & varied something like 40 Taps - there is definitely something for everyone, a nice mix of beers. We spent a good 30 or so minutes here, but we had decided up front to make this a quick visit. So we all declined the food menu & decided on just having a quick Pint instead.

I, like xlperro, decided to tackle one of the house beers, which as it happened was one of the brace of beers that were served from the Dual Bank Angram Beer Engines, the other was Fullers ESB, which EyeChartBrew tried if my memory serves me right. To be honest the SDBC Paddle Up Pale Ale, tasted rather funky. I do not think this was so much a problem with the beer, rather than its age. Condition was very low, overall the beer tasted old & well past its best, and I have drunk enough cask beer in the past to recognize this characteristic. Maybe the turnover on Cask is low, or the Casks are oversized, one in the same thing really. But one beer does not a Brewery make, & I can forgive this glitch when reviewing the Bar itself.

It was quiet whilst we were there, & the service was attentive. The matt black painted ceiling & dim lighting can soon make you forget the bright sunshine, scorching temperatures outside & the fact that you are in a Shopping Mall. I can easily imagine that full of punters, this place has a real drinking atmosphere about it, I could easily waste an afternoon here working my way through the Taps.

Overall a decent enough Bar, it certainly warrants another visit, I would dearly like to get back here & try a few beers from their varied range. Maybe an updated BeerFly with a little more feedback on quality & food will not be that far away one hopes. Until then it gets a maybe harsh 3.5 for the former, & a "didn't try" for the latter.

Great beer selection, prices a bit high. Decent, but not great food, and decent service. In a strip mall and usually parking available.

San Diego BrewCo is one of my favorite places to go to grab a good beer and some good food. I haven't ran into anything on the menu that I haven't liked. The beer selection is pretty good, the occasionally have Pliny on tap. They have a good selection of house beers, nothing spectacular but good. Would be nice if the servers knew a little more about the beers, but if they don't have the answer they're more than happy to get it for you, very friendly staff though. Great place to go on a Saturday or Sunday to catch the game. Highly recommended!

Apparently this place is the reincarnation of Shakey's Pizza from the 60s with a 21st century beer list. Brick walls, little curtains on the street side, big and roomy. Reasonably quiet in the "family dining" side, and booming rock in the bar side.

A standard southern California selection of locals with no particular standouts. Four from Sierra Nevada that are less common. Belgians included Rodenbach Grand Cru, Delerium Tremens, and a Liefmann's. A few other Europeans-- who would have thought of this place for Marston's of Wolverhampton, Oyster Stout on nitro? Big beer board in the bar had all the facts, styles, and abvs. Only $4.50 for their own pints.

Menu looked slightly more interesting than some, but the Brewman's plate was kind of icky, aside from a good spicy sausage. Should have had the nachos. Barmaids were unfazed, our waitress was quite attentive. Not exactly beer fanatics, but tried to be helpful.

Great selection of Beer here! The house Beers are very Tasty and Dean the brew-master's Hopnotic is one of my Favorite beers! The Service is excellent as the girls who work the Bar are Awesome and are very knowledgeable about their beer! I love that they post their current beers on tap on their website! The menu is decent but a little narrow on the selection but I really don't care. This is still one of my watering holes and will be for a long time to come! Great place for breakfast too before a game! Fun spot to tip some pints, hang with friends and watch some sports!

I used to go here with my buddy who lived just down the street. Very good beer selection accompanied with pretty tasty food. You have to have their nachos, I know nachos aren't usually that crazy, but here they're AMAZING! My only complaint, which I admit isn't the establishments fault, is I hate half pints on high ABV beers! I just feel they are a waste. Back to the beer, they're personal brews are very good and always have a revolving stock of other great craft beers. Now that I'm not in California anymore, I really miss this place.

We rolled into this place on a Sunday during the early football games. The layout is decent, and there is a dividing wall between the table/booth seating and the bar area. The bar is a giant L-shape, and there is some open seating in the bar area, also. Great atmosphere. Kind of dark, but decent vibe.

Their own beers were pretty damn tasty, and they had a monster guest tap list. I actually had PtE on draft for the first time there. Impressive list. The bartender was very helpful, despite being busy with the NFL crowd. He took time out to answer questions my wife and I had about their beers (ABV, hop types, spent grain uses, etc.). Great service.

The food was pretty decent, too. My wife and I had sandwiches, and a pretty decent dessert, too. With everything included, the price was cheaper than most places in the San Diego area where we ordered much less. We definitely plan returning when in the area again.