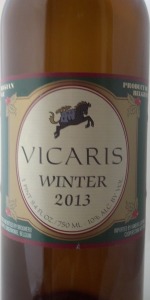 Poured a brown body with one finger tan head that left lace down the glass. There are notes of spice and dark fruits in the aroma but I swear I get this aroma that borders black cherry and licorice (anise?). Medium bodied beer that is easy to drink thanks to the yeast keeping it smooth, tiny bit of caramel and candi sugar (or at least something sugary) sweetness, mostly get flavors of dark fruits that are subdued and this spiciness that I swear is licorice or anise (I might be crazy). I enjoyed drinking this beer but there is not a whole lot there and what is there is just mild; basically the first "session" high ABV Belgian I've ever had.

750ml bottle. Poured out a cloudy, dark, brown color with a small, tan head of bubbly foam. It left some sudsy trails of lace. It smelled of raisin, plum, dried dark fruit and toffee. Tasted rich and malty with some spice and notes of plum, raisin and toffee.

A: Pours a mostly clear deep chestnut brown in color with moderate amounts of visible carbonation and a faint amount cola brown highlights. The beer has a finger tall foamy light tan head that reduces to a large patch of mottled thin film and a thin ring at the edges of the glass. Light amounts of lacing are observed.

O: Not the richness and depth of flavor that I expect from a Belgian Strong Dark Ale - still enjoyable.

A: The beer is very dark brown in color. It poured with a quarter finger high dark tan colored head that died down, leaving a thin ring of bubbles around the edge of the glass.
S: Light to moderate aromas of dark fruits are present in the nose.
T: The taste follows the smell, having flavors of dark fruits—albeit somewhat muted in nature—along with some hints of yeast.
M: It feels medium-bodied on the palate and has a moderate amount of carbonation.
O: This beer doesn't seem to exhibit as much of the fruity and sweet flavors that I would normally expect from a Belgian Strong Dark Ale.

Really big head. Comforting, not too much alcohol taste but warmed me up like a snifter of brandy. Slight flavor of brown sugar and a little chocolate.

This is a bottle I got at the local deli's close-out sale. Sorry the grocer closed (they had an incredible beer selection) but was happy to pick up this and a bunch of other gems at half off.

Poured from a corked and caged 750 mL bottle into a Brewer's Art goblet. This was a gusher despite an underwhelming cork pop - caught me by surprise. 2013 edition.

O: Nice winter brew here. Not much cloying and fairly quaffable for 10%. Nice depth, if not particularly unique. Delightful on a cold winter night, such as this one.

From a 750 ml bottle, this beasty pours a thick murky brown with a hair of red coming through
on the edges. Sporting a huge tan head and great lacing it is a beauty. Nose of bready malts,
Belgian candy sugar, dark chocolate, and earthy goodness from the yeast. Flavors of dark
fruits to the middle, Belgian candy to the side, bready malts overall with light spices and some
dark bakers chocolate in the background lending to a light bitterness. VERY complex yet
more than approachable with it's smooth mouthfeel and warming alcoholic presence. The
various fruits are in abundance, orange peel, apple, raisin, just layered one on top of another.
Moderate to light carbonation. Most excellent.
I have yet to have an ale from Vicaris that I did not love. THIS is no exception.

Poured into a Gulden Draak tulip. Pours a dark red-orange amber with a half glass café au lait colored head that continued growing after pouring and leaving massive lacing. Aroma of caramel malt and dark fresh and dried fruit, slight sourness. Flavor is rich, sweet fruit cake; bready and carmel malt, dark and light dried fruit, dark fresh fruit, rum, brown sugar and chocolate. Finishes slightly drier with holiday and Belgian spicing and a hint of hop bitterness. Medium bodied with light creaminess counteracted by peppery fresh carbonation. A moderately complex, sweet and rich Belgian dark. There are a lot of dark flavors in this and this may be the closest ale I've had with a rum soaked fruit cake flavor profile. Although teetering on the edge of being too sweet, there is enough interesting flavor to carry it off. The high ABV is dangerously well covered. I liked this a great deal and plan to get it again next winter if I can.

Draught @ Monks: This is the 2013 release. This one pours a dark brown color with about a half finger of tan head. It leaves some lacing. Nice nose! Spicy and peppery, malts, dark fruits and a hint of chocolate. The taste is very good. Some coffee, chocolate, dark fruits, bready, spices, toffee and a hint of woodsiness. Nice!

Enjoyed on tap at Bier Station way back on November 11th, 2013. Finally getting around to using my notes to put a review on the website. Poured into a small Belgian tulip glass.

Appearance - Body is predominantly a chestnut brown hue, with an ethereal quality imparted by the fact that the liquid is somewhat translucent as well as being a very dark brown. Head is silky and about a finger thick, a dark tan color, like cocoa powder. It dissipates fairly quickly, leaving almost no lace, but collecting in bubbly bunches around the edges of the glass.

Smell - Dark fruits, mostly raisins and dates, along with faint esters of the high alcohol. Subsequent intakes reveal some sweeter elements of burnt caramel and even rye bread and buckwheat.

Taste - Here the sweet malted grain comes to the forefront, with caramel sweetness and a bit of spiciness from the yeast alongside the same dark fruit notes from the aroma--mostly raisins. The sweetness of the malt makes me think a little bit of dried figs as well and a bit of nuttiness, like hazelnuts or almonds. Finish makes me think of fruit brandy, but not nearly as cloyingly sweet.

Mouthfeel - Medium-bodied and moderate-to-low carboantion with an overall feel that is luscious in the mouth. Like latte foam only more dense. A semisweet aftertaste lingers.

Overall, a tasty little winter beer that I likely wouldn't have tried were it not for the recommendation from one of the friendly people at Bier Station. Definitely hits most of the key stops on the Belgian dark ale tour and makes for a good cold weather brew.

Commissioned by Vanberg & DeWulf, the masterfully crafted ale may have originated with team effort, but its taste congeals as one: dense malt sweetness, high effervescence, and a spicy-sweet interplay are just a few of the Belgian tones that signal unity right from the start.

Dark brown and hazy with rust tones, the beer is dense in both the cloud of its body and the thick blanket of foam that tops its crown. Strong, like meringue- the foam is long-lasting and laces confidently with well-defined rings... right down to the last sip.

Its taste is bold, sweet, bready, full and rounded. Its malty introductions do so with the rich taste of molasses, brown sugar, chocolate, toast and marzipan while allspice and freshly grated white pepper acts in contrast. As the bready-sweet flavor lingers deep into the session, it finishes with vinous red wine, earthen saltiness and mild herb woodish taste that simply offset its trailing sweetness.

Much fuller in body than the Belgian strong dark ale. its body is rich, lathery and creamy. Even though the beer is dense it peruses a drier tendency, having to overcome high sweetness and pound cake-like density, dextrin-rich flavors and lasting vinous tact in order to achieve semi-dryness and warmth.

This succulent sipper seems to be a meal in a glass. But despite its chewy texture and full taste, its balance and complexity is impeccable. But you can't expect this to be a quick session as the beer's weight compromises its drinkability somewhat.

Vicaris Winter 13 from Brouwerij Dilewyns
Beer rating: 87 out of 100 with 29 ratings