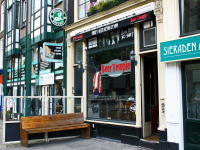 View: Place Reviews
Reviews: 29 | Ratings: 80 | Log in to view all ratings and sort
Reviews by JohnfromDublin:

I visited this Amsterdam bar on Sunday night (October 23rd 2011) after having a meal in a nearby restaurant. It had been on my list of places to hit on my Amsterdam weekend and was dismayed to find out that it was closing at 10pm and we would only have time for one beer! So I went for a brew from Great Divide; the fantastic oak aged Imperial stout on tap.

They have about 30 taps with many brews from Great Divide, Flying Dog, Left Hand, Mikkeller etc., so not exclusively "American". They also have in the region of 100 bottles on their menu. Prices were acceptable (most of the beers are American imports after all) but the ambience is not that great. Even though it was less than a year old, it seemed a little drab. I also felt that the barman could have made a better effort at clearing away dead glasses from the tables; it was not that the place was busy, in fact it was very quiet.

Best beer-place in Amsterdam hands down. Great services. Knowledgeable and Friendly staff. Fifty (50!) taps of hoppy beverages. American centric but also local (american style) beers as well. Amazing selection. Little gem in the center of Amsterdam. Nice to sit-down and relax with a refreshing pint after strolling the streets of Amsterdam.

Knowledgeable bartender and great selection of International beers. This bar is Amsterdam’s “American” beer bar, with plenty of USA favorites on tap and in the cooler. But I went for the house beers and was not disappointed. Cool vibe, plenty of tables and maybe 6 seats at the bar. Did not have any food. Easy to find. Can take away “house beers”, otherwise consumption is on site. Will visit again!

Stopped in on a recent visit to Amsterdam. Had heard great things about the tap and bottle list. For me, it was a bit disappointing. They had the basics, but nothing really special. The few bottles/cans that were a bit rare were out of this world expensive. I think a bottle of 120 minute was 35 Euro. The tap selection had one or two stouts and no barleywines. Seemed a bit odd to have nothing in these categories. Service wasn't great. Super slow - took almost 10 minutes to be served. The one guy behind the bar was taking orders and taking those drinks to tables. Overall, I wouldn't visit again.

This is a place geared towards American beers and being an American, I wasn't in love with it as I have access to most of the items. Found Boon lambic on cask, however which was fun to try!

HOTD Fred on tap? Yes, please! And the bartenders were super nice guys who were more than willing to talk beer, even though it was busy (weekend night). I gave a 3 for food, because if I remember correctly, they only had snack-type stuff on the menu. We had some Chimay cheese (worked incredibly well paired with a barleywine), and they also offered Orval cheese. But for a place of this size that offers so many different, special beers, a full kitchen would be almost impossible. Besides, let's not distract from what we all came here for...

Great space and place. So many bottles and drafts on hand.

I got to this place totally alone. I actually wanted to visit this a long time ago and then I had the chance once I visited Amsterdam.

I came in suspecting that inside there would be a world I'd fall in love for. Counter at the right, corridor at the left. 2 to 3 three people speaking dutch. I seat at the counter and look at the beers. Great selection here. But my eyes must've shined when I saw Stone and Arrogant Bastard on tap. For me this was a novelty. Had a Double Bastard from AB and an Americano from Stone, both 4 ozes. Ended up speaking half an hour with the barista and getting one friend in Amsterdam.

I totally recommend this place.

One of the best craft beer places in Amsterdam, if not the best. 35 beers on tap, among which one can usually find some nice rarities. A very nice selection of bottled beer - a bit pricey, but you can find stuff you don't normally find in other places. Helpful and knowledgeable staff, great atmosphere. Can be a bit too crowded sometimes.