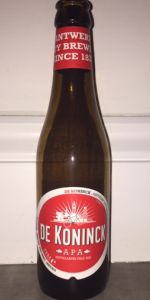 Presentation: 11.2oz custom brown bottle. Bottled on date stamped on the back.

Taste: Medium bodied with a flush malt character. Wonderful toasted flavours followed by some dryness, yeasty spice and a sweet fruit-like flavour reminiscent of black cherry juice, but without the tartness. Finishes with a touch of grain dryness.

Hazed amber with the occasional bubble rising to the top, superb head retention. Ripe plum in the aroma with a hard spicy back from the hops, faint esters awaken the nostrils even more to further suck in its intoxicating aroma.

Grassy with some medicinal phenols, moderate body with a halting smoothness that rolls the crispness around the tongue. Maltiness is cracker-like with a clean graininess. Hops are prolific with spiciness and an even bitterness. Fruitiness is plumish with faint alcoholic esters on the side. Clean drying mineral finish.

Served on a glass in a bar. The color is amber reddish. The smeel is quite good. The foam forms a small head. Middle carbonation can be seen and perceived. Overall, a quite decent beer.

33cl bottle bought from De Hopduvel in Ghent. Clear amber pour with a thin light-tan head. Smells of caramel, generic bitter hops, dried fruit and metal. Light bodied and refreshing mouthfeel, bitter and crisp, not as sweet as the nose would suggest.

A- pours a perfectly clear burnt orange with garnet highlights. the head is beige and dense with a pock marked membrane on top and it pretty much stations itself at a thick disk the whole time without leaving much lace behind. a constant column of superfine bubbles rise continuously releasing aromatics.

S- tart and fruity with some spicy yeast in the background, it smells great but is pretty subdued, even at 55*. what is there is complex, as i've come to expect from these fruity belgian red ales, with red apple and red plum, cherry, berries, and toasted bread with grape jelly. quality lambrusco wine and white muscadine grapes also come to mind with a caramel malty sweetness hiding in the shadows. despite the bottle's claim to fragrant saaz hops, i can't detect much, but that's ok cuz this smells great.

T- taste is a little watered down and all those great notes of the aroma kind of become monotone with some apple cran-grape yeast, caramel malt, and cocoa toastiness jumping out here and there but not very loud. finish is weak as well with just a hint of dry grassy saaz hops ushering me out of the theater.

MF- light and watery, but smooth and easily drinkable. medium light carbonation generates an overall 'blah' feeling. a little filmy on the cheeks, but a pleasant aftertaste.

D- not like the flavorful belgians i'm used to, however its lightness and smooth character would make it a great brew to kick it with (ice cold) and maybe even straight out of the bottle... oh no !

Pours a semi-translucent amber with a loose, half inch, off-white head that quickly disperses towards the edges, leaving a bubbly band and a bull's eye dollop in the center. Nose is very subdued but suggests green apples (maybe a little vinegary), as well as Saaz hops and grains. Taste is big on earthy grains and malt with perhaps a trace of acidity. A biscuity quality lingers between quaffs. Mouthfeel is light-bodied, with a carbonation that starts off crisp and slowly tapers off towards the back, ending with a semi-dry finish. Decent and drinkable, but not much going on here and the doesn't particularly warrant a future purchase for me considering the price.

I would go for light brown rather than amber when describing the colour. This beer has a small head and from the looks appears almost still. It leaves no lacing.

The smell is very sweet. With yeast and fruit aromas.

The taste is also sweet. There are malts and definite notes of fruits and apples. It is light in carbonation. I must say that this doesn't strike me as a very complex beer.

The mouthfeel is smooth and dominated by a pleasant malty aftertaste. Likewise, the drinkability is also above average.

A: Cloudy amber color. A decent head forms with decent lace.
S: Very sweet, tart, and fruity. A little funky, and some peppery spices as well.
T: Follows the nose. Lots of fruit, very tart and some spices.
M/D: This is pretty highley carbonated for my taste. Low abv though, and makes for a nice easy drinking Belgium pale ale. A sessionable beer.

Not a bad beer at all, but it does not hold up to some of my favorite Belgium beers. Worth a try though.

11.2 ounce bottle bought for five dollars at the new Belgian pub in Claremont named Back Abbey, my bottle said it was 5.2% ABV, I poured into a Chimay goblet the waitress brought me, split with my buddy Drake

A-Color was a golden amber, big 3/4 inch white foamy head, stuck around for almost five minutes, decent retention, some lacing at the beginning too

S-Bread and lots of it, toasted accents, weak caramel, some weak hoppiness, faint fruit but I could not even tell what it was, little bit of earthiness, and hay

T-Did not taste like it came from Belgium, seemed like a mediocre attempt at a pale ale from an American microbrewery, it lacked any spices or distinct malt flavors to make me think otherwise, went down too easy and this stuff is more of a beer to have by the pool on a hot summer day, rather than a flavorful Belgian, now I understand why I never heard much about this one, got worse as it warmed, it was refreshing at least when it was cold, hop profile was weak and there was not much bitterness either

D-Could drink a lot of this stuff, especially considering it is a Belgian, light on the stomach, alcohol is hidden and weak anyways, smooth and inviting

Crazy to think this beer has been around since 1833, I always see at BevMo and have never grabbed it, the sales pitch on the bottle says it is made with crystal clear water and top of the line feremented malt, only got one tonight mainly because it was the cheapest thing on the menu and it was low in alcohol because I still had to drive eighty more miles home, might drink again, worth trying

byronic from Canada (ON)

I had a bottle at L'Express on 20th (I think) Street in NYC. I pours a deep red with a good three-finger head and solid lace. Has a slight spicy scent to it...licoricey?

I think there is definitely a dry licorice taste to it and is quite carbonated. The taste is mild, dry, but the carbonation makes it quite refreshing. Very good afternoon beer.

De Koninck poured a nice amber color, with a small tan head, also showed nice lacing. Smell was of fruit, malts, hints of citrus. Taste was from fruity, citrus, nice malt. Good sweetness and Belgian yeast flavor. Mouthfell was good, and drinkability is very nice. Good session beer, nice flavors, for the price however, you kind find things on par with this beer.

S - Has a bready malt nose with some fruit to it

Had this at "Taste of Belgium" restaurant in Aruba.

A nice amber ale, but not sure how it calls itself a Flanders Red. I get some red malt like flavors, but no Flanders sourness. That just doesn't make sense to me. Overall a nice mild amber Belgian ale though.