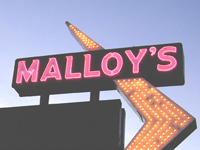 View: Place Reviews
Reviews: 4 | Ratings: 7 | Log in to view all ratings and sort
Reviews by ackeeper:

the selection here is why you would go, the service and attentiveness is lacking, but if you know what you like already then you are sure to enjoy this store. I remember when their wine was the big attraction, but seems now they are leaning towards craft beers, good move!

Was going Binny's hopping and saw this place... Couldn't resist the giant cool sign so I stopped in....

Beer is the left half of the store, but it looks so empty... As if they just had a big sale and sold half their product.
Sadly, I think they don't do enough business and therefore cannot carry enough product to fill out the store properly.

The selection is your basic middle-high-end Midwest shop: some goose, bells, founders, an FFF, with a large selection of imports.
Lots and lots of macros, BMC lagers, and malternatives.
I was only impressed to see Rogue bacon maple doughnut, but not because I was interested in buying it-- rather because I didn't know it has been distributed.

Prices seem about average for the area: being only 3 blocks from a Binnys seems to force as much.

Overall-- not a bad little shop, and I would check here for limited releases after hitting up Binnys. They seem to have the buying power to get some decent stuff in.

I remember passing this random liquor store with the cool sign my entire life and never going into it until one day I decided, what the heck.

This was a few months ago when I initially went and Parabola was few and far between around Chicago. They definitely had some, though there was a one bottle limit.

As of late, when FBS has been out around other bigger stores (read Binny’s right down the street) this store still has a steady supply of it.

It has the usual suspects beers wise, and nothing crazy rare or out of the ordinary. Limited foreign section, and the normal American beer staples.

Inside is a bit warm for my liking and also there is beer right by the front window’s though it appears light is blocked overall (but still...).

Prices are lower than Binny’s which is a plus. Most of the craft beer is not in coolers but is rather on the shelves. I have a feeling some of the inventory does not move (saw an old style label for Arctic Panzer Wolf, though they also had the new version right next to it).

The store itself inside is like a typical liquor store - not run down but nothing special. When I'm there the service has always been decent.

Not my first stop by any means, but worth a checking out if a few “popular” but easy to get beers are out at other stores.

Awesome vintage sign out front reminded me of being on Route 66, or some roadside attraction in the 1950's at least. Inside the beer was on the left hand side, on 3 short shelves. In the coolers, craft and macro was sort of disorganized and mixed together. One freestanding cooler had some random bombers and singles. DFH 120 Min. was in a little locked case with the expensive scotch, and also in the one freestanding cooler.

The majority of the selection was on the shelves, sort of close to the front windows, but partially obscured behind a window wine display. I noticed a few Rogue, Lagunitas, DFH, 2 Bros, basic FFF, and some standard Belgians. Selection had some good staples but nothing especially rare. In the coolers the Cane & Ebel was fresh, but there was some dust on the shelves. The Hop Stoopid I bought here ended up being pretty faded due to age.

Checkout was pretty quick, the clerk was Scottish and the lady in front of me went off on a tangent about Highlander. That was pretty funny.