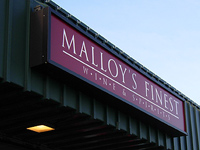 Reviewed by FosterJM from California

Atm- A smaller out of the way store in a larger strip mall. Its small but open on the inside. Could use a face lift from the flourescent bulbs and bad tile. Beer in the back in a couple coolers.

Quality- A little bit less of a selection to pick from. Think I mustve caught them at a bad time. Really nothing worth walking 2 miles round trip for. All I grabbed was the Oak Hatter, I forgot to grab at Binnys. Even smaller mix 6 selection

Service- Nice enough people in the store. The little tatted hipster counter was cute and friendly.

Selection- Just okay selection. Again nothing to get all excited about. Normal regional selection. Shelf GI, New Holland, some Founders.

Reviewed by SpdKilz from Illinois

4.08/5  rDev -3.1%
vibe: 3.5 | quality: 4 | service: 4.5 | selection: 4
Headed over here last week to see what they had. Still can’t believe it has taken me this long to get to some of these stores around the area. Walked in after lunch to an empty store. Walked over to the beer section. While a little bit on the smaller side, there were some solid beers available including the new Three Floyd’s seasonal Broo Doo. When I walked up to check out the woman behind the counter was very friendly and nice. I had to ask for the hell of it whether they had any CBS, and while she said they did not (she stated they didn’t even get any allocation) she did pull a 120 min from behind the counter which I picked up. Prices were reasonable and the store was clean and nice looking though it could use a facelift. I’ll stop back here if I’m in the area.
Oct 18, 2011

This place is smaller than the nearby Binny's, but SO much better. Selection is very focused, not gigantic but very well curated. I didn't have my notebook on me so I didn't take any notes, but I can tell you I bought a 4-pack of North Coast Old Stock 2010 and a bottle of North Coast Grand Cru 2011, which I have not seen anywhere else.

There was also an entire shelf of Southern Tier beers (including Creme Brulee), plus your usual Midwest suspects (Two Brothers from the 'hood, Bells, Founders)

Lots of Belgians, Germans and quality Euros, plus a neat selection of bombers. Last time I was there the manager asked if I needed any help and when I said I love barrel-aged beers he went to the back and got me a Port Bourbon Santa's Little Helper. Sweet!

The wine selection is damn fine too, and the service is outstanding. They greet you, they help you, they smile, they don't bother you too much with ID stuff... and they open until 10pm most days!

Prices are VERY reasonable, and much lower than at the nearby Binny's. They also have regular beer tastings, with as many as 60 beers you can try for free. Sweet or what? Any time I am back in Naperville, I will make sure I stop here. A great experience overall!

Reviewed by AleWatcher from Illinois

4/5  rDev -5%
vibe: 4 | quality: 4 | service: 4 | selection: 4
I've been in this store many times whilst searching for limited releases. They seem to always get an allocation of everything-- and they're ok with holding it for me if I call and ask them to! Whenever I'm in the area I stop by here and check out their selection.

The craft beer is always growing-- the imports seem to only focus on the old stand-bys, but that's ok for a store primarily devoted to wine.

The prices are generally fair and the employees have all been quite friendly, though perhaps not the most knowledgeable.

Reviewed by bvick7 from Illinois

4.5/5  rDev +6.9%
vibe: 4.5 | quality: 4.5 | service: 5 | selection: 4
First went to Malloys to find a seasonal release I wasn't able to find elsewhere and have been back several times since. While wine takes up a good majority of the store, there is a nice selection of craft beers toward the back. While the selection is not as large as Binny's, Malloy's always seems to have some of the newest releases. Some beers of note are the Boulevard Smokestack Series, Smuttynose, Dark Horse along with Founders, Goose Island and Great Lakes.

The service at Malloy's is great. Everytime I am in there someone asked me if I need help finding anything. I have called on several occasions looking for certain beers and they are always helpful.

The prices seem to be on par with other liquor stores in the area.

I really like this store and will continue to brining my business there.

Reviewed by JamnesCameron from Illinois

Fairly decent selection of beers for a smallish sized store. Nothing really rare stood out, but they did have Hopslam and the new Goose Island bomber. Nothing I can't find somewhere else. The biggest draw here was the prices. Much lower than my usually places, about one-fifth to one-quarter lower. Attentive staff, eager to help out if you need anything. Will be my backup place for a quick stop on the way home.

Reviewed by drewba from Illinois

4.35/5  rDev +3.3%
I started going to Malloys because when Binnys Naperville would run out of Alpha King, I knew that Malloys had some. Its also really close to Joy Yee, one of the more solid pan asian restaurants in the suburbs. Anyways...

Service is top notch. Nearly everytime I'm perusing the beer section, I've been approached and asked if I need help or am invited to an upcoming beer tasting that they're hosting (they happen fairly often). The rest of the staff is quite friendly, and a few have even asked that I report back to them about a beer that I'm buying.

The selection is fair for a store that uses most of it's space for Wine. Basically Malloys has 3-15 foot long two tiered shelves, 2 end caps and two small coolers dedicated to craft. Its a farcry from the behemoth, Binnys, just down the street, but Malloys has a massive craft section compared to your standard store that only has a single cooler shelf with SN or Sam Adams. They always have plenty of Two Brothers, Three Floyds, Great Lakes, Founders, Bells, Avery, Stone and many other breweries. They do have a modest belgian/import section, but this isn't somewhere I'd go to stock up on imports.

I absolutely agree with Emerge077's note below that Malloys Naperville is the best location for beer of the three.

Reviewed by JohnnyTightLips from Illinois

4.3/5  rDev +2.1%
Went in to see if they any Sierra Nevada Celebration left. The cashier said that they just ran out & was nice enough to walk over to the beer section just to be certain. For a place that had wine take up a majority of the store, I was still impressed with the beer selection (even with the building that's smaller than the Naperville Binny's) I even saw out-of-place bottles like the 2 Brothers barleywine BareTree Weiss from 2008 for $6.49, which are great for aging. Prices even seemed less than Binny's.
Feb 10, 2010

4.15/5  rDev -1.4%
12/10: Can't resist an update... seasonal shelf, strong bomber selection, but the area for sixers seemed to be lacking, and encroached by alcopops and other junk. Seems like the shelves could use a redesign. Single malt selection was pretty nice with lots of independent bottlings.

The two staff members were on the floor and very helpful. As I was the only customer in the store, they came by at different times to ask if I was looking for any particular beers. They chatted about beer styles for a bit and gave personal recommendations.

The selection was focused on US craft, with an adequate representation of Belgian, German, and UK beers, roughly 20 from each country, plus random euro and others tossed in. Near the coolers there was a free standing shelf of Goose bombers, basically the full reserve lineup (Sofie, Juliet), a buck or two cheaper than elsewhere. In the coolers there were several limited 2 Bros. beers like Heavier Handed, Bare Tree, and Moaten. Dreadnaught for $9.99 was a great price. On the shelves there was a good assortment of craft from DFH, Founders, FFF, Summit Unchained, Dark Horse x5, NB Lips of Faith series, and others.

Overall this was the best store of the 3 locations, the best service and deepest selection.