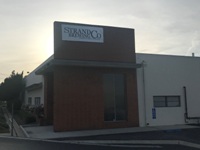 Not far west from Smog City and Monkish is the lesser known, but still quality brewer Strand. Just past a set a railroad tracks and in an industrial complex with ample parking, Strand Brewing's interior is huge and could easily fit hundreds of people in its tasting area. As such, the room had plenty of seating and room available, which was welcoming compared to the smaller, more crowded tasting rooms of Smog City and Monkish. The bar is easy to find from the enterance, and the beer menu is legible and varied, hitting from the hoppy pale ale to a Madagascar Bean Imperial Stout to celebrate their 100th batch. Simple clunky shaker pints with the Strand logo makes much of the glassware, with branded tulips for their stronger ales. Prices for their "standard" ales start at just $5 a pint, and from there the pours can jump to $9 in the most extreme case. In the city of Torrance, Strand Brewing is not to be overlooked.

This is my neighborhood brewery so I love them! All of their beers are choice. 24th Street Pale Ale is my favorite pale ale and their Black Sand and Atticus IPAs are definitely some of the best I've ever had. The Strand is located conveniently located off of Lomita Blvd in Torrance in a nice quiet industrial park. Definitely worth a visit if you're ever in the South Bay looking for a good beer.

All of the beers are easily world class! 24th street ale is an AMAZING pale ale and white sand is an awesome double IPA, you really cannot go wrong. This brewery is awesome, I would argue that it is the best in LA County!!! Seriously try it....you will not regret it!!! Strand is awesome....can't wait to return during spring break : )

The story of Strand Brewing's breakout success is one of stubborn determination and dedication to the craft of beermaking (read it at http://lat.ms/Tmjn44). Luckily, this two-man operation also churns out some fantastic beer. LA barflys will be familiar with Strand's 24th Street Pale and Beach House Amber, both delicious, crisp and sessionable examples of their style. But their most exciting stuff isn't even available in kegs yet. Strand have a pretty remarkable black IPA that's more of a hoppy stout than a roasty IPA; when I visited the brewery, they had just tapped their 3rd Anniversary Beer, a double "East IPA" spiced with curry, cumin, cinnamon, cloves and tamarind. Strand's experiments seem to be paying off but they brew much more than they distribute. So a visit to their taproom is highly recommended. If you go, say hello to co-owner Rich Marcello. There ain't a more amiable dude in LA beerdom. One caveat: they don't do flights or half-pours, so make sure that you have some time so you can take some time with full glasses of their bigger brews.