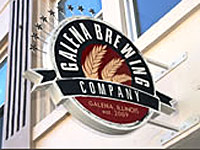 Summer 2019
New brewer, new seasonals, nothing too exciting but a decent blueberry coffee blonde ale and Uly’s is pretty good though less robust than I remember it. Atmosphere was kind of lame, screaming kids and crying babies. The place is big enough they shouldn’t seat huge groups with kids right next to the bar, but it is seat yourself so it was the group at fault. Not sure if i’ll return here.

08-05-2014
3 years later... some things have changed. The brewmaster left to work at Pecatonica (a rumor I heard), and they only had a couple seasonals, an English pale and Rye something. Krankshaft guest tap (yay) but it blew (boo).

The more exotic menu items were gone in favor of mostly standard pub grub. The staff didn't seem to know much about the beer or the large pictures of historical people the beers are named after. It was funny when one person asked what IBU's were, and the bar was all aflutter about it. A little bit disappointing after a fairly strong start, though they still make a couple good flagship beers (Uly's and the hefe).

Also, why do they open at 4pm during the week? I swear I saw a dozen people try the door at lunchtime, only to find it closed (including me). I'll continue stopping here when in town, but the bloom is off the rose to some extent.

08-04-2011 4.18
Stopped in here today after missing the opening by a couple weeks last year... overall first impressions were good.

This was formerly a funeral home? Wow, it's huge. Vaulted ceilings, exposed beams, wood floors and a rustic bar towards the back with the brewing equipment front and center under a skylight. Seating for 15 at the bar, with about 20 or so tables around. Space was set up for a dj, karaoke, and their weekly "brew-olympics" event.

We were just in for lunch, and the atmosphere was pretty chill, surprisingly with heavy reggae vibes flowing. Karin was the bartender, apparently also a big reggae fan who relocated from San Diego, which was fun to chat about. They recently held an outdoor reggae fest here, and brewed a tasty seasonal apricot beer for it, Jah-pricot. Service at the bar was really great in general.

Beer selection seemed to be pretty standard style wise, with one rotating seasonal. They do about 5 flagship beers, and also had Millstream craft sodas on tap. Standouts were the Hefe (far better than the old Sand Creek contract-brew), Annabelle's IPA, and Ulys Dark (Irish Dry Stout). Also good but not too wild were the Farmer's Cream Ale and Miner's Treasure Late Amber. Growler fills were $18 so we passed, no outside glass either. They were actually brewing that day (behind the bar) so that was fun to see.

Food was actually really good, we ordered a few things of the tapas menu, which were easy-to-share small plates, great "beer food". First was a small loaf of beer bread, baked in house using their amber ale, with a side of honey butter. The beef empanada with rosemary and demiglace was very tasty, also the caprese flatbread and mini charcuterie plate. The menu seemed contemporary with a broad range of styles. From their website: "Gluten free and Vegetarian dishes; Nothing fried, nothing grilled!" They even had roasted marrow bones, which may be off putting to some, though also a menu feature at high-end restaurants in bigger cities. There's more to Galena than just wine and steaks now, the beer revolution has finally arrived...

Great potential with GBC, they put alot of work into the building rehab, and it's a nice space with a broad appeal in this tourist town. Hope they expand the seasonal selection, and do some occasional small-batch stuff, maybe allow their brewer to get more creative (HINT HINT) and brew the Hefe year-round. I'll be stopping back in whenever passing through the area. 2012: They seem to be running a slightly more diverse beer schedule with new seasonals such as Belgian Saison and Rye Barleywine. Keep it up!

Nice place in the quaint, historic town in Galena that struggles with parking. In the middle of a string of novelty shops. Nice town. This place has a nice vibe in an industrial setting. Beers are good, not phenomenal. I had their wings that were on special. 20 for $10. The Parmesan garlic wings were phenomenal. The BT was very responsive. Kid friendly as well. I will go back every time I take family for a road trip. Carry out 16 ounces. Can take growlers as well.

Visited the brewery last Friday and took the tour. Brewermaster Jon Wagner led the tour and was very informative. For only $5 you get the tour and a pint of beer. Wagner gives a little beer history, brewery history (Red Stripe was started there), and how they brew. Well worth 5 buck.