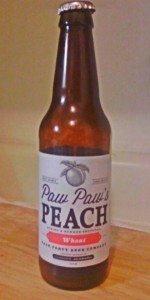 Reviewed by ArchimedesSox from Georgia

Clean aroma of ripe peach and little else.

Taste is flawed, nothing like the scent. Peach, yes, but not a ripe one or even fresh for that matter. It's as if the brewer used peach peels or skins for flavoring and the brewing extracted some bitterness from them. Could be hops but it's a disjointed juxtaposition of flavors. The underlying wheat ale is very mild and seems to serve primarily as a carrier for the peach.

Not their best effort I'm afraid. If I hadn't paid good money for this I wouldn't even finish it.

This beer pours a hazy, pale golden yellow colour, with a near-teeming tower of puffy, loosely foamy, and bubbly off-white head, which leaves some random sudsy island group lace around the glass as it quickly blows off.

The bubbles are fairly innocuous in their plainly rendered frothiness, the body a solid medium weight, and generally smooth, nothing really capable of running interference here willing to stick its fool neck out, y'know? It finishes well off-dry, with both the mixed malt and stone fruitiness taking on the lingering day with a fervour, of sorts.

Overall, not a bad fruit beer, only the singular peach component kind of duffing it, as such, which implies a certain lacking, but really, this one is hefty and heady enough to overcome that, and makes for a titillating and refreshing summer quaffer, in the end.

3.64/5  rDev +2.5%
look: 3.75 | smell: 3.5 | taste: 3.75 | feel: 3.75 | overall: 3.5
not sure if i prefer this one or the honey brown. its a neat brew too, with a delicate but perfumy peach character and a very light wheat malt base, and not much residual sugar (thankfully). never been down to ole alabama, but i can imagine a hot muggy summer where a fruity tart brightly carbonated low alcohol beer like this one would be perfect (if festina from dogfish cant be found). the body is super light and there is a light tang to it which makes it really summery. the peach is both bold and subtle at the same time, hard to do. its a fruity beer but its pretty dry, and the peach flashes in and out so it feels more like a beer than a juice. back fourty is up to come cool stuff, with good local flare. it takes me to a place i have never been, and i enjoy that very much. unlimited drinkability too
Oct 28, 2014
Rated: 3.5 by thatoneguymike from Georgia

Reviewed by BMMillsy from Florida

3.36/5  rDev -5.4%
look: 4 | smell: 3.5 | taste: 3.25 | feel: 3.25 | overall: 3.25
Bottle from Burg. Thanks. Pours deep clear golden with a fluffy white head that recedes rather quickly. Nice aroma of lots of sweet peaches, some hay, wheaty funky notes, not bad. Flavor is very peachy as expected, with a dirty wheaty finish I always get from the style. Fairly sweet and pretty juicy. Medium bodied with lowish carbonation. On the sweet side and I don't know that of want more than one of these, but better than the other two I had from this brewery. If you like peaches, I find it hard to believe you wouldn't think this is decent.
Aug 09, 2014
Paw Paw's Peach Wheat from Back Forty Beer Co.
Beer rating: 81 out of 100 with 58 ratings