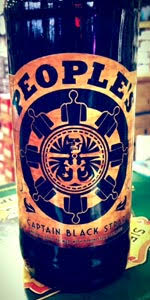 A - Dark brown pour, very viscous on the sides of the glass, toffee colored lacing, little to no carbonation.

T - Black licorice and anise abound in this beer with lingering earthy bitterness.

O - Black licorice isn't my gig but this is an enjoyable stout.

A new batch from late 2016. I'm unfamiliar with the original bottling, which was made as People's 100th batch. Intense, dark roasted aromas, with the blackstrap molasses featured prominently with other notes of anise, charred grains, light ash, and bitter botanicals. The flavor profile is more balanced, with more molasses sweetness to balance out the woodsy bitterness. The mouthfeel is full-bodied, leading to a longer, smoother finish than the rest of People's lineup. A solid brew.

The bottle hilariously refers to this as a Russian Imperial. It's a double stout, guys. And it's loaded with Blackstrap molasses, so I hope you like them oldtimey sweet.

On tap, it was very good. Not excellent, but very good. When first bottled, it was cloyingly sweet. Now, after having aged for about a year, it's merely very sweet, which is the intended effect, and which is very good.

Pours dark black with minimal carbonation. Smells like dark barley, chocolate, and molasses. Tastes very much the same: bitter malt, sweet rounded earthy molasses, and then a finish of semi-sweet chocolate mixed with horehound and spice, like the candy jar of a 150-year-old woman.

A rather neat beer. Slightly imperfectly brewed and just horrible labeled, so that knocked its standing down a few pegs, but I hope they try it again--age it a bit, and for chrissakes call it something other than a Russian Imperial.

Tried this one on Dark Lord Day when at People's instead of Three Floyd's.

A - Deep black which glistens in the glass. Pours thick with dark creamy head.

S - Very strong malty smell with a roasted, sweetness, and some alcohol.

T - Tremendous flavor having a very robust character super malty, roasty, chocolaty, and some toffee/caramel taste. A bold mixture of alcohol, malt, and every flavor that comes with a RIS.

M - Robust mouth-feel with low carbonation. Silky texture with a lingering taste that keeps you begging for more.

Overall, this is one of the best beers that I've ever tasted. So much flavor packed into every sip. This RIS but it is an extremely tasty brew. Not the heaviest beer in the world but definitely can give every imperial stout a run for the money. If you are a fan of big flavor then you should make sure you pay attention to People's facebook page so that you can try this delightful brew.

A: Pours a nice black with a thin tan head that quickly settled leaving slight lacing. Just thin enough to catch a dark espresso tint at the top of my glass.

S: Largely licorice, chocolate and a dark sweetness from the molasses.

T: Finish is short and dry with a hint of coffee crisp.

M: A little too much carbonation, overpowering the underlying beer. The feel is a bit thinner than I'd hoped for.

O: Not bad. I think it's a good stout with some slight addition with the molasses. Not necessarily unique, but worth a try.


Captain Black Strap from People's Brewing Company
Beer rating: 91 out of 100 with 18 ratings