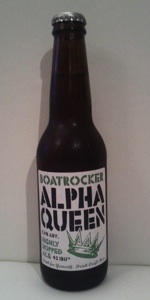 Taste is a mis-mash. Passionfruit notes and hoppy bitterness get somewhat disjointed, which is worsened as the temperature increases. Somewhat astringent by end.

These guys have improved a lot and my notes appear to be different tot the peach and mango beer I have in my hand. Zesty pour (5 finger head) and very well carbonated. Going down well. Moderate flavours thus sessionable

Reviewed by bylerteck from Canada (ON)

A - Poured copper with a film of white head. Bright. Spotty lace and a film of retention.

O/D - A refreshing pale ale. Juicy and really sessionable. Tasty stuff and worth a shot.

Reviewed by vancurly from Australia

t) Grapefruit, bread crust, a background of pine resin. Reasonable bitternes. In the style of SNPA, but not as complex or integrated.

Pours a clear dark bronze-amber colour, with a speckled and large-bubbled head of white that sinks very rapidly to an unappealing film. Really, it's not a good look at all. Body looks quite heavy. Minimal carbonation noticeable.

Not a lot of hops on the nose for a beer named after a hop acid, but instead, we get a huge aroma of sweet diacetyl butterscotchy blurgh. Perhaps I tell a lie, in amongst this is a slight organic greenness, the hint of banana leaf and something herbal and minty. It's faint, but it's there, the promise of hops.

But like all those times my Dad said he'd come to my baseball games when I was a kid: the promise was a lie*. On the palate we get more diacetyl that is not nearly covered up by the insipid bitterness that makes an appearance on the mid to back palate. Even then, it's more of a carbonic acidity, or a tingle of essence de hop than true alpha acid clout.

Feel is fine, but the diacetyl seems to make it thicker and more cloying than it is.

Of course, promising to be a "Highly Hopped Ale" means you have a lot to live up to, but this doesn't do nearly enough to warrant that tag.

I might try it again if I hear they've beefed it up, or if someone tells me I probably just got a dud bottle, but it seems to me that mediocrity is the general consensus here.

*My Dad's a great guy. That anecdote was merely added for comic effect.

3.57/5  rDev -0.8%
look: 3.5 | smell: 4 | taste: 3.5 | feel: 3 | overall: 3.5
This brew pours a light see through copper hue with decent carbonation that leaves behind a frothy two finger head and sporadic lacing,the smell is alot better with hints of tropical punch,mint and passionfruit,it has an average mouthfeel which is light bodied and leaves tastes of stonefruit,light toffee,tropical punch all on the palette and it finishes with a light passionfruit bitterness,overall its an average tasting drop but its definately not bland and alot better than any macro offerings out there i just got the impression from reading the back of this label that this was gonna be a hop bomb and that it is clearly not as i have had alot more hoppier beers than this one but its easy to drink.
Dec 02, 2010

Reviewed by Macca from Australia

Definitely not displaying highly hopped (as promised on the label) aromas. A little bit of pineapple and passionfruit. Sweet malt coming through as well.

The hops aren't as assertive as I would have expected. Malt is quite upfront but not too sweet. Reasonable balance and ongoing bitterness.

Nice enough but some much better APAs out there.

Pours a pale golden colour, very clear with modest off-white head, and lots of fizz in the glass. Head sinks to a small cloud and leaves little speckles of lace behind. Looks quite lagery for an ale - basically fizzy and pale, pretty blah.

Smell is a pleasant pale ale smell - pineapple and slight banana esters blend with some subtle floral hop characters, cascade and maybe some nelson sauvin? Slight citrus tinge to it. Quite sweet overall but definitely refreshing. Maybe a bit too subdued, particularly for something that is marketed as being highly hopped.

Pleasant floral and fruity flavours abound on the palate. Some nice hoppy characters start from the beginning. Has aspects of fresh pineapple and pawpaw with a woody hop character coming through on the mid-palate. Slightly tart on there but not bitey and a nice zing with some caramel sweetness as well. Very nicely rounded palate with no great dips and spikes, just a nice balance through the palate with a crisp, hoppy finish.

Mouthfeel is not as thin as I expected but still swims a bit in the mouth, with a bit too much carbonation. Not too bad for its faults though.

Yeah a pretty decent beer, doesn't have the edge of Little Creatures or Murray's Nirvana but is a solid drinking pale.

3.64/5  rDev +1.1%
look: 3 | smell: 4 | taste: 3.5 | feel: 4 | overall: 3.5
Pours golden amber with a small head.
Big citrusy aroma, but more tangerine than the usual grapefruit/orange. Also hints of tropical fruit, pine. Quite grassy. Some sweet biscuity malt with a little caramel.
Flavour is more malt dominated. Quite clean. There's some green grassy hops there but not as much as the aroma suggests. Finishes with a rather tame bitterness.
Mouthfeel is very good, perhaps a little prickly at first but it calmed down soon enough.
Quite impressive!

A bit malty for an APA with a moderately-strong malt profile with hints of toast and caramel. A touch metallic and thin. The hops are there but mostly as bitterness and are a bit harsh. Some additional flavour and aroma would be really good.

It's drinkable but I'm probably not going to buy it again. The malt is too high and the flavours are a bit harsh.