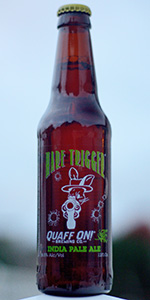 Certainly enough hop bitterness for an IPA. Old-school flavors with all of the Cascade up on our palates. Balanced though we had hoped for a bit more hop flavor. A half step ahead of the average, would be a full one if it was cleaned up a bit more. Watch the dregs!

T - Sweet tropical fruit from start to finish with a fruity bittersweet finish. On the very back end the sweetness migrates to a slight sugary sweet cloying. Some nice peppery fruit rind pokes through after the sip.

O - This is a solid IPA and deserves a higher score than it's current 3.68 rating. Not overly hoppy, not malty, hits the right notes. Approachable and very drinkable.

Citrusy, piney and pleasantly grassy, Hare Trigger is a poignant hybrid flavor, stuck squarely between American Pale and American IPA. Labeled for Quaff On Brewing Company, this is the production company for Big Woods Brewing Company.

Its translucent amber appearance allows the ale to take on honey-like proportions. Equipped with the classic "dry-hopped" haze, the ale glows softly in the glass. As a tall and creamy head builds upon, its foam is long and lacy- a standard look for IPA.

Its straight-forward hop aromatics zing with the scents of freshly zested oranges, grapefruit, lemon and juniper. As its perfume of fresh-cut grass builds, a leafy and stemmy note emerges, seemingly of sassafras tea. Its light backbone of malt is lightly of caramel, giving a granola and graham cracker-like aroma. A late stand of torn pine needles rise as I dive into its taste.

Its taste is even more dedicated to the hops. But first, its light caramel and honey provide a thin veil of sweetness upon the early palate. But the middle is all citrus. The same lemon, orange and grapefruit character of the nose is tangy, juicy and lightly acidic. But finishing decidedly bitter, its citus pith character grows and meets up with resinous pine, spicy grass, leaf, and stem leads to a mild earthy taste.

Medium-light in body, the beer's carbonation bounces off the palate and drives any left over sweetness away. As all that effervescence proves fast-fleeting, it leaves the finish weak and on the verge of watering. Such lightness allows a margin of hop-derived astringency and grain character to be felt, along with the beer's natural herbal warmth.

I rather enjoyed the IPA, but I would rather them pull back on its strength to more resemble newer "session" IPA or push forward and establish the body and strength to support a proper IPA.

On tap at Tomlinson Tap Room. Poured a nice deep copper color with nice head and lacing. Nice hoppy and malty aroma, but honestly the hops were a bit hard to place, with some earthiness and citrus aromas. Very nice flavors, with a good sweet malt backing and some very nice hop attributes; it came through as licorice and citrus, with a slight earthiness to it; hard to describe, I wish I knew what hops went into it. Went down nice and smooth, a very nice and interesting IPA!

Pours an opaque amber with almost no visible carbonation. Virtually no bubbles, and consequently, no lace.

Nose is citrus and floral hops -- not bad.

Taste is simple -- I get citrus (orange, specifically). There isn't much complexity here at all -- more in line with a basic, starter pale ale (rather than an IPA). Not a lot going on here, but it is easy to drink.

A - light amber pour with a very thin head that quickly dissipated.

T - balanced hop and malt. Towards the lower end of the style.

Overall a pretty good beer; towards the lower end of the style, but extremely drinkable and solid overall.

A- Golden Amber with a small amount of head after pour that dissipates into a ring.

S- Smells fresh and crisp. Hoppy and kind of piney even. I get a nice floral smell when brought closer to the nose.

T- Smooth start, hoppiness is there. The floral aroma turns into a bigger taste. There is a little bit of a buttery flavor too.

D- For an IPA it's good. I don't like the super hopped up ones, and this is probably on the lower end of average hoppy flavor. Easy drinker at the pub.

T-Very similar to the nose. With earthy, citrus, dirt notes all balanced together and it ends with good bitterness.

O-A great IPA from a local brewery. Was a little worried when I tried it but it turned out very pleasant.

When this came to me, I got excited. A hazy, golden color with decent head. Smell was kind of faint, but citrus and floral tones were most prominent. Menu says 6.5% ABV and 75 IBU.

Sadly, at first drink, I was disappointed. For one, 75 IBU was pretty inaccurate by my taste. While not a hop-head by any means, this might have been between 40 and 50 IBU. I kept thinking you could call it a light IPA the whole time I had it.

The mouthfeel was the other thing that got me. It was nearly flat, and drank more like a stout than anything. It reminded me of drinking a Guinness with IPA flavor. It felt almost slick and slightly thicker on the tongue instead.

Overall, I kind of wish I hadn't gone with this one right off the bat. It may have made me more critical of their other beers, but first impressions are important.