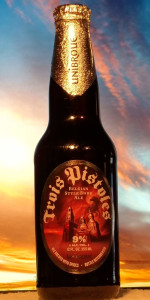 Notes: Drawing on Quebec folklore, Unibroue chose the name Trois Pistoles to honour the city’s historic importance and pay homage to the legend of the Black Horse. Conjured up by a priest to help build a new church, this incarnation of the devil ran off when its bridle was removed. Because construction was still underway when the horse vanished, a stone remains missing from the church to this day.
View: More Beers | Place Reviews
Recent ratings and reviews. | Log in to view more ratings + sorting options.

Pours a dark brown with a run-away long lived tan head and a lot of lacing.

Smells of toasted malt and yeast with some sweet fruit.

This is one excellent, powerful sipper!

Trois Pistoles pours a ruby red so dark as to be almost black with a thick off-white head that lasts forever.

The aroma brings to mind dark fruits such as cherries, plums, and strawberry jam, with a hint of dark chocolate underneath.

The flavour brings across all those dark fruit notes with just a hint of sweetness, and introduces the dark chocolate notes on the finish. There's a layered complexity and balance to the flavours that I only find in exceptional Belgian beers.

The carbonation is effervescent and gives the beer a really rich, decadent mouth feel. The 9% alcohol is very well hidden.

This is a truly fantastic beer! An awesome Belgian Dark ale, I think it compares very favourably against Quadruples as well. This is one of the tastiest, most complex and well balanced Belgians I've had, and everyone I've introduced this beer to has come away impressed. Unibroue has really outdone themselves here.

Bottle poured into a nonic

Brewers Notes: Drawing on Quebec folklore, Unibroue chose the name Trois Pistoles to honour the city’s historic importance and pay homage to the legend of the Black Horse. Conjured up by a priest to help build a new church, this incarnation of the devil ran off when its bridle was removed. Because construction was still underway when the horse vanished, a stone remains missing from the church to this day.

Poured a thundercloud of foam into a Gordon Biersch Maibock glass. The aroma was sweet malty with a hint of coriander. The taste has spice with stone fruit with a medium creamy mouthfeel that easily settles on the palate. Without a hint of the ABV, it's between sippable and crushable, though it's for sipping for flavor.

A: Pours a deep brown with a brief 3 finger tan head that fades to a smooth cap. It leaves lots of soapy lacing on the sides.

S: Aromas of caramel and molasses. No hop aromas.

T: Taste follows the nose. And with only 15.5 IBUs, you're not going to taste any hops, either.

F: Smooth with tingling carbonation, moderately full bodied. At 9% it's strong, but it's not going to knock you on your butt.

O: Overall, it's a good value. An excellent take on Belgian-style strong dark, by a solid Canadian brewery. This and Maudite are probably my favorites from UniBroue.

I bought this for the Trippel tasting weekend, not sure why, but here we are. Obviously rating as a Belgian style Dark Ale.
Poured dark, like reddish cola and managed to get about 5 mm of head of beige foam which pretty much stayed the whole time.
The aroma was more dark fruits like raisins and prunes; not sweet at all, very pleasant.
The taste followed, mouth-filling flavor of malty goodness.
The feel was almost viscous, which considering all the flavor and the ABV, it made perfect sense. Excellent sipper.
This one turned out to be a happy mistake, I'll definitely revisit it on purpose.

Pours a murky dark mahogany color with some reddish hues, and a medium tan head that recedes quickly leaving behind a moderate amount of lacing

The aroma is sweet; consisting of cherries, raisins, dates, brown sugar, a mild spiciness, and a pronounced booziness.

The flavor follows the nose closely, with a mix raisins, plums, cherries, brown sugar, molasses, and a hint of spiciness. Also, as with the nose, there is a strong booziness, but not overly strong, just enough to alert you to the 9% abv. Full bodied and moderately carbonated.

Overall, this is a very nice beer that I will be revisiting

As with many of Unibroue’s offerings, they have a hallmark style with their Belgians — leans fruity, and leans on the subtler yet complex side of things. This is no different. Complex nose that is hard to pick apart the malty side, spiced fruitcake, gentle cloves, fresh dark fruits like cherry. Molasses and toffee.

Flavour follows the nose pretty tightly. Alcohol is well hidden but the warmth it has adds a dimension to the flavour profile, a woody sherry like flavour. More malt here than on the nose, especially on the finish which recalls toasted bread and spongy chocolate coffered toffee and sugared apples. Bits of yeastiness wax and wane throughout your palate as you sip it.

Incredible mouthfeel. It foams very, very hard in your mouth but the carbonation is not particularly prickly. This gives it a very foamy mouthfeel on the way down. Medium bodied beer that is relatively sweet, no real bitterness here. Medium-high level of carbonation, especially noticeable in that sip, but the carbonation is not overly biting. Nice subtle but long finish leaving a gentle sweetness, yeasty grains, and dark fruits on the palate.

As mentioned before, I find almost all of Unibroue’s offerings to be milder on the flavour strength than Belgian styles from Belgium itself. That doesn’t make it bad, but they lean towards a more mild and complex flavour profile. They also tend to be more fruity than malty, and that is the case here. They write that rum flavours abound in the nose and palate, my experience has been with the fruity side of the beer it has a strong port or sherry side rather than rum, but you can get a rum taste. It’s just not as strong as other Belgian styles or malty Eisbocks.

Overall it’s quite a formidable beer, just as good as anything out of Belgium, while carving out its own unique niche and noticeable flavour profile on its own. At the same time, mild enough to be enjoyed by any beer drinker, even though new to the style. Unibroue really does not tend to miss on any of their beers

Wow. Fiancé Raul called this one ‘three guns,’ but like Jimmy Stewart in Winchester ‘73, Raul only needs one. It just encompasses you Like the first day of fall: foliage in glorious ecstasy. It’s full and vibrant like Carl Winslow on Thanksgiving.

A real beauty to look at, from the dark brown body to the large, lasting tan head to the graceful lace. Layers of rich malts in the aroma where you can pick out dark fruit, pitted fruit, molasses, brown bread and probably a few other favorite descriptors. Just don't count on too many hop varieties. Taste leans the same way although the hops come into play a bit more. Spiciness is more noticeable, especially in the aftertaste. Sweetness is a factor while bitterness is minimal. Mouthfeel is full bodied and decently carbonated. Check the ABV before guzzling more than two.

I love Unibroue's offerings and this one doesn't fail to impress. For sure in the top tier Belgians. You can tell it's strong however as the alcohol is present.

Excellent quality. Belgian ale (Dubbel) Made in Canada. Price is Excellent as well, compared to Belgian dubbels.Dark fruit, cocoa, and smooth. 2 thumbs up.

It was nice to pick up three Unibroue singles a few weeks ago. This was the one new-to-me brew of the bunch. And what a great brew it is. Unibroue seems to always make very easy drinking versions of styles that are often not the easiest.

This pours a gorgeous deep brown with tons of fine foamy head. The aroma is subdued (my beer is warming), but appetizing and a bit boozy. The taste is delicious malts and yeast. I don't think this sample is very old, but this style would age well. I should get a sixer and put some up.

Recommended. I will be happy to have this again some time - it is a nice and easy version of the style while not being phony or wimpy.

L: Dark brown color, not quite black. Tan tall head that dissipates into a centimeter of coating on top. Moderate lacing that sticks.

S: Black cherries. Sweet malt. Undertones of alcohol. I might be crazy but it smells a little bit like coca-cola.

T: sweet and thick are the dominant characteristics. More dark fruit, cherry and raisin. Bitter/sharp on the back end that can make it feel not as heavy as it really is.

O: close in profile to Belgian darks. Has some interesting qualities of fruit and tartness but still doesn’t top actually Belgian’s to me. Still very good.

Nothing to say that hasn’t already been said. Impeccably well crafted example of the style. Hard to believe it’s not made by monks in a Belgian Abby. Oh Canada!

Poured a dark mahogany with a thick beige head.

Tastes of Belgium yeast and malt with some toffee-caramel. There is mild spice mixed in with apple and dark fruit in the finish and very mild bitterness.

330 ml bottle, courtesy of Cardinal pub, Stavanger. Dark brown beer with a huge beige head. Very fine and complex aroma with vinous notes, also notes of oak, spices, cocoa, red berries and dark fruits, hints of barnyard and tobacco. The flavour is sweet, vinous and fruity, quite smooth for 9% ABV beer. Moderate hops. Many of the elements of the aroma stay with you through the flavour and aftertaste. An excellent beer!

12oz bottle. Stamped on bottle neck is Best By date of '01-07-23'.
Deep brown colored body, with a red/copper backlit body. Multi finger light beige colored head. Leaves some strings and partial walls of lacing.
Aroma of the earthy, metallic yeast, along with apple, date, and cherry, with a little dark malt.
Taste is cherry and date fruit, and some dark malt; this combo is sweet. Mainly at the end is the yeast, which dries out the palate through the after taste.
Mouth feel is full. Some spiciness on the tongue. The higher ABV% does bring a boldness. Very good carbonation. Low bitterness.
The dryness at the end entices another sip but be careful with the 9%; it will warm you up in the hurry. Would be a good food pairing with a sharp or strong cheese, or with a stew or lasagna.