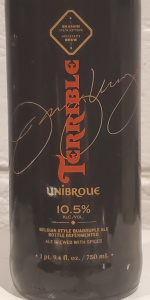 Notes: In 2002, when the SAQ requested an exclusive new high-end product, Unibroue responded with Terrible. Given its dark colour and 10.5% alcohol content (a first for Unibroue), we knew that this Belgian quadruple-style ale might very well be greeted with reticence.

So we gave it a name that would evoke terror and worry, but also something extraordinary, formidable and awe-inspiring. From here on out, no other beer can ever be called Terrible.

After the cage was removed, a firm grip was required to manually remove the firmly entrenched cork which was marked (dated?) 03-2. A loud &#8220;thrup&#8221; resonated whilst a light grey-blue gun smoke quickly dispersed.

Appearance: There is a lot of activity with the first pour, a large head forms and settles with an almost nitrogenous stout like character. Very, very dark brown, with a deep, almost impenetrable mahogany body &#8211; looks like a warming pot of percolating Coffee. A tan colored head that slowly rescinds with an audible fizz, which whilst it leaves almost no lacing, always leaves a thin large bubbled covering.

Nose: This has quite a fruity nose, though a little restrained; it has some peppery spices and a background of yeast twixt lightly roasted malts and a light toffee.

Taste: Has a light sweetness, malts, a feint chewy toffee mouth and a feel of dark fruits to start with. Rhubarb middle with some sweet malts in the latter third, which reveal a peppery spice ending.

Mouthfeel: Creamy with a pepper pinch. The alcohol is present in the form of dark malts when the Terrible is swirled in the mouth. Once swallowed, there is a lingering yeasty fruitiness and an aniseed-like tingle feel on the inner cheeks.

Drinkability: The whole 750 was certainly not a problem & I had to remind myself this was 10.5%. Given this fact, it was an offering that was highly enjoyable and one of those beers that is great company for a good portion of the night.

Overall: Not one of greatest beers from Unibroue IMVHO, it lacked depth and complexity in lieu of Drinkability I found. A good beer but not one I&#8217;m sure I&#8217;d purchase again. Maybe age will better it.

Well, if by the title of "Terrible" Unibroue is trying to say "Rocks The Casbah!", then I understand what they are getting at here. This, dear diary, is one of those exemplar beers that should not go unnoticed, should not be passed by if you are so lucky enough to pass it on a shelf in your neck of the woods, should be both horded and consumed, loved and cherished.

Came in a brown 750 ml caged and corked bottle, the logo is in stamped silver (probably a new batch from the gold label bottles from last year). Classy, elegant, minimalist. Pours out a silky reddish-tinged black. Big off-white head. Nose contains intense raisin and fig characteristics, purple grapes and some chicory. Nearly like wine. Flavour is a medley of sweet and spice, dried fruit and brandy. It's terribly good. It's terribly drinkable. Thick, velvety mouthfeel, yet goes with ease across the pallet and down the throat. No boozy bite at all for a 10.5% abv.

I give it top marks, this is very impressive, well beyond my expectations. The aweful truth is that La Terrible is f-ing fantastique.

Overall great taste, bought a bottle for the holidays and it was somewhat expensive but turned out to be well worth it. Plus I happen to be a sucker for beer bottles that do not have paper label and incorporate the label as part of the bottle, it really added to the experience because it shows the though about every detail of their product and not just good tasting beer, but it shows they even cared about the presentation and culture of their product.

750 mL 2004 vintage. Dark, dark brown body, nearly black, with some light shining through the bottom of the glass. Head is light tan, creamy and hue on the pour, but fades to a nice solid layer atop the beer. Spicy, with funky Belgian yeast, dark fruit, alcohol, hops, slightly sweet, with other spices. Taste reflects many of these dark flavors, dark and funky, sweet and has a nice hoppy finish, slightly smokey which fades to a bitter end. The flavors are very strong and this beer definitely earns the name La Terrible. Another great Unibrouian beer

pours a very dark brown with red highlights in a chalice. head is a 1 inch light tan that drops to a capper fairly quickly. thick ring around the glass laces well. first aroma is a vinous grape juice with spices like corriander and pepper. first sip is corriander and pears with a light alcohol tingle and a noticible creamy thick body. grapes, raisins, dates, and maybe prunes. dark, lightly sour fruit with a sweet and yeasty bitter finish. when paired with a horseraddish monterrey, strong oak flavors came forth along with prune/plum characters. truely a wide array of flavors. alcohol fusels become more evident after warming. mouthfeel is, again, creamy, thick and rich with a champaign-like carbonation. swallows very smoothly and rolls around with a light alcohol prickle. drinkability is quite good considering the 10.5% abv, but take your time with this one. it can definitely sneak up on you. overall, this is quite a belgian strong dark. very flavorful with a smooth mouthfeel. i wouldn't say this is my favorite, but it's up there. a must try. i'm interested in how this one matures.

Pours a dark dark red. Great aroma of dried fruits and yeasty Belgian funk. Taste follows, with dried fruit, currants, apricots, and more of that Unibroue funk. A nice treat, takes a red wine and removes the bitter tanin taste and just leaves the great fruit flavors. Gets better as it warms. Booze is VERY well hidden making this a dangerous but wonderful brew.

a full fledged original gangster of a beer here, one of the classics in its style, especially this side of the pond. different from any of them though, with a very original yeast complexion in here, and as much savory and umami as there is sweet in it, everything from molasses to burnt pie crust to a thick soy reduction, there sure is a lot going on, but its so well integrated, layered, complex, and expertly built that it all seems to make perfect sense, it has a lot to say, and i am all ears! the deepest brown color with a nice body evident and a creamy beige head from the tap, bubbly but patient still, not overly blowing up, regal and mellow, but still very belgian looking, slick looking shine to it as well. traces of smoke and raisin here, cognac and dark candy syrup, treacle and licorice root, wet tobacco and charcoal, birch and leather, old man and soil, its awesome, like no other. thicker body is pushed on by brisk carbonation, yet the palate remains coated with all the grainy cooked goodness, and it warms me from the inside. slight brine here at the end with the sweet, rye bread, cocktail cherries, dates and fig jam, along with the esters of the belgian yeast floating well above it all. brilliant liquid, famous for a reason. genre defining really...

Had this one recently, as a finish, after a sampling of Belgian-style beers and cheeses. The liquid is a nearly-black, thick fluid, topped with a bubbly, solid, large-bubbled head. The aroma is sweet, malty, and alcoholic. Alcohol and spicy phenols characterize the smell. Additionally, the sweetness in the aroma has a sugary, plum-like quality. Taste is intensely fruity and sweet, with serious alcohol warmingthis is not a subtle Belgian-style brew. Peppery, spicy, and yeasty flavors offer a nice balance to the sweetness. Full, soft, and thick. Slight hop bitterness in the finish. The beer is complex, intense, and seriousNot to be missed.

Poured from a 750 bomber. Medium to dark body, looks a bit thin yet robust in flavor. Towering head, tan, off-white. Some clumps developed around the center.
Smell was full of dark fruit, raisin and malt. Some yeast was present to add richness and diversity. hint of malt and vanilla oak.
Taste follows the aroma. Dark fruit, bisuit, some diverse yeast. Leaves a nice mellow aftertaste. The alcohol is present and gives it a bit of a thin feel to it.
A very nice beer. Alcohol limits enjoyment to one.

Great example of this style

A: Dark brown to black with a foamy head that fades to a ring of lace after being poured into a Chimay chalace. If I used the Unibroue glass I was too lazy to clean then I'm sure the head would have hung around a bit longer.

S: Dark fruits..plums and figs with a hint of chocolate. Some yeast and malt and overall intoxicating on the nose.

T: Very complex and balanced for a strong Belgian. Delicous fruits mixed with spicy hops. The alcohol is in there but very cleverly disguised and not overwhelming.

D: Very drinkable for an ABV of 10.5%. Definitely one to use to introduce others to dark Belgian brews.

Finally got this in good old Ohio with the new law change from last year. This beer poured a very dark, almost black amber color and formed a small off white bubbly head that left trace lace. No light was getting through this one. The aroma was of malt, raisins and chocolate. The flavor was of malt, chocolate and a touch of brandy if you will. The finish was astrigent, yet sweet with a medium body to it. Another fine beer from a great brewery.

Poured from a 750ml bottle into a New Belgium goblet.

The aroma is filled with raisins, figs, a hint of caramel and a smaller hint of chocolate.

The taste is composed of raisins, figs, and some molasses, but surprisingly there were no obvious alcohol flavors.

The mouthfeel is medium. The beer is highly carbonated with a fairly dry finish.

This is a very drinkable Belgian dark strong. The dry finish only makes it more drinkable.

Pours out a very dark brown, with a thick brown head that slowly gave way into thin lacing on the edges. Hints of deep red when held up to the light.

Lot's of dark plum, aniseed and fig in the smell. Mild cloves in the back from the alcohol.

Sweet fig and plum flavours blend with bitter aniseed, very complex. A lot of flavours blend between each other and it is hard to decipher what is what, which makes it fantastic. The alcohol gives it some dryness, but not overly so.

Quite heavy mouthfeel, with quite a good bit of carbonation, which is normal for Unibroue it seems. For 10.5% this is freakishly easy going down.

Has that unibroue smell. This one particularly has some darker fruitiness to it... maybe fig/date or cherries

Good bitterness with the fruit that you can smell but I feel the alcohol is just too much.also has that unibroue aftertaste that i don't really enjoy. Feel it masks anything before

ok drinkability but one is plenty