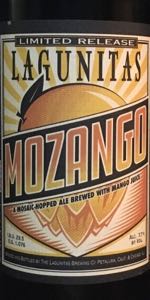 We've got a big juicy secret for ya. Word on the street is this ale's loaded with bunches of earth-floral Mosaic and citrusy-piney Simcoe hops AND sources tell us it's even packing some fresh mango juice in the mix. Like a smooth and aromatic tropicalian punch, right in the kisser... Mozango!

Consumed January 2019. Below average for a Lagunitas hoppy offering. I'm not a fan of fruit in ipas (other styles, very much so).

Pours a light orange and amber kind of color. Decent clarity for something with fruit added. 1/2" white head. Small bubbles. The aroma, well if you thought Mosaic was going to shine here like it does say in Stereohopic, nah. You get plenty of mango, commercial tug job checks out, but Mosaic is distantly far behind. Gotta imagine mango is cheaper than Mosaic hops.

Taste was barely better, the Simcoe they don't talk much about does bring this back to normal ipa territory, giving it a hit of pine like bitterness, but the normal drying mouth feel of the Simcoe hop and Lagunitas simple malt base is overrun by the mango addition. Just a larger degree of mango (and the sweetness thereof) than I desired to have. Carbonation was fine.

This wasn't terrible, but it was disappointing, Lagunitas usually is super reliable and affordable when it comes to hoppy beers.

Look: nice mango orange
Smell: smells like a typical ipa if that makes sense.
Taste: citrus hop flavor, mango does subtlety come through, juicy, well balanced, little bitter hop
Feel: medium, fits well
Overall: a well done ipa that has a hint of mango. And I love mango, so this gets a nod from me

I was on my weekly re-up to the Friendly Greek Bottle Shop (FGBS) when I spied this bomber sitting on the shelf. It was the last Bottle (gasp!) remaining & I was curious, especially at the meagre price point. I have been running through the Bud Light Hard Seltzers of late & I knew that Mango was upCANming, so I decided to try this on its own, a wee bit of the seltzer on its own & finish with a blend of the two. 8=O

From the Bottle (!): "Limited Release"; "A Mosaic-hopped Ale Brewed with Mango Juice"; "I.B.U. 29.5[;] O.G. 1,076"; "The flesh is weak, but the spirit is willing. So, what's at the heart of it? Is it the patient and diligent servant or the committed messenger, through their many routes and vessels? The salient soldier, slinging suds on the front lines daily, or the very brewers themselves? The answer is ... we can't tell you here. From seed to sprout to fruit, and back to seed, we're all tangled on the same vine. And while fruit is momentary, the roots hold on for another season. It's all just a matter of perspective ... how's the weather out there? Cheers!"

I was in the process of Pop!ping the cap when when I unexpectedly began getting a bunch of foaming through the neck! I then initiated Emergency C-Line Pour procedures, getting the cap off posthaste & going with a quicker, less gentle pour than I would have preferred. Things got under control rather quickly after that, forming two-plus fingers of foamy, soapy, rocky, tawny head with limited retention. 8=( Color was a pretty Golden-Amber (SRM = > 5, < 7) with NE-quality clarity, prompting an impromptu visit from The Gelt Gang of Midas, Mammon & Croesus, all clamoring for a taste. Nose was mango, unquestionably, but a bit light, given its billing in the name. Hmm. Mouthfeel was medium, but light for the style. The taste was definitely tropical fruits, mango heading the long list that also included papaya, guava & passionfruit. At one point, I became saturated with tropical fruit AIPAs, but after having stepped away from them for a while, this was a nice return. I did not find it to be very sweet, as some reviewers mentioned, but instead, it was on the verge of a light tartness. Mango is not a sweet fruit, per se, and can be lightly puckering, especially if it underripe. This beer mirrored the taste of mango nicely. Finish was somewhere between semi-dry & dry and it was a really refreshing interlude as a result.

Now the Bud Light Seltzer Mango: Nose and taste were closer to real mango than in the beer. It was closer to tartness than the beer had achieved, but it lacked Ooomph! I usually add some vodka, flavored or regular, to their seltzers at this point. Instead, tonight, it would be a Mozango/BLS Mango blend! I added the beer to the seltzer since it was the seltzer that needed help, not vice versa. It actually worked! The resulting CANbination was MUCH closer to tart & very evocative of the actual fruit! 8=O I then beCAN to alternate between straight Mozango & the blend. It was a really pleasant way of doing business. The blend really made me appreciate Mozango all the more while the blend made a ho-hum seltzer very exciting.

Should you deign to try this at home, please bear in mind that I am a professional. YMMV.

I got to give it props it delivered on a very aggressive hop profile but very smooth fruity aspect of raw mango juice. Was it sweet and tart and enjoyable? Not really in a way it was just a heightened IPA that these mad geniuses tend to brew a lot but I have to give it credit it made me buy a bomber which I haven't seen in almost a year. Prost!

22oz bottle of Lagunitas's Mozango, a mosaic-hopped ale brewed with mango juice. Limited release. Beer is crystal clear, brassy yellow in color, forms little head, but forms a load of sweet mango flesh aroma in my nostrils. Flavor is more mango mixed with pine-y hops. There's ample carbonation and a dry finish which counteracts any concern that this could have been a sweet or NE-IPA style mango IPA. Solidly in between fruit beer and IIPA, but probably a better example of the former than the latter.

Very nice IPA! Lots of citrus, berry, and of course, mango in the aroma. Flavor is full of juicy mango, with a grapefruit /mandarin/orange zest finish. Feel is sticky and silky, and quite nice.

Semi hazy with a medium bubbles.

Taste: sweet mango and citrus. Malty and smooth hops which are a floral explosion.

Overall: Good brew. Wouldn't let it go, not expsensive and slot for your money. Always in a glass, Salud!

12oz bottle. No dating information found, other than '2018 ONEHITTER SERIES'.
Clear, gold colored body. One finger of bubbly white head, which settles back to islands, but the ring is fed by rising bubbles. Leaves behind some small spots and curls of lacing.
Lots of mango in the aroma, along with some piney dankness.
Taste is fruity, piney, and dank, with lots of mango. Minor bitterness but overall quite sweet.
Medium mouth feel, with some hop bite. Very good carbonation.
Refreshing ale with a full on mango component for smell and taste. A little dry.

As far as fruity IPAs goes this one actually brings a wallop of fruity taste with every sip as opposed to only a faint sense of fruitiness a lot of other fruit-infused IPAs have to offer.

Poured from a single-serve bottle into a tulip

Pours a relatively-nondescript clear gold, although with a nice two-finger head.

The initial aroma is dank and piney, but the honey and mango sweetness quickly shines through.

The flavor is an interesting mix of dank hops and a wide variety of fruit flavors--mango, apricot, ruby red grapefruit, and pineapple--with a white pepper finish. The flavors are pleasing, but they almost seem to be "competing" or clashing with each other, rather than complimenting.

The mouthfeel is excellent. Medium bodied but crisp.

Mozango from Lagunitas Brewing Company
Beer rating: 90 out of 100 with 238 ratings