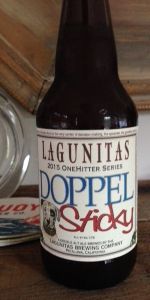 Notes: This fruity, estery double altbier is brewed in the traditional-ish style of the Doppelsticke, which is the widely known secret Germanic-esque strong ale. Like it's California Common counterpart, we fermented this ale at a lower temperature to pull out the sulphur-y bite from the yeast, then dry-hopped it with some dank, Sticky hops, including some brand-spankin'-new Enigma hops from the great Down Under!

Light caramel color body with some cloudiness to it. Massive and dense with the white suds action. Leaves a scattered trellis of lace sticking to the glass. Waves of dank Mary Jane in the aroma and flavor. Its lightly tropical with grapefruit, dank resins, and some spices. I get the bready malt with biscuit notes and a light toasted caramel kiss. A bit of stone fruit with some faint earthiness as well. Really well balanced in the face of a danky hop onslaught. Tips the scales more towards IPA or at least drinks like one to me. Leafy green with tropical citrus and spice. Swayed with toasted bread and light toffee. Moderate body with a nice frothy texture and good drying in the finish. Fairly resinous.

Loving this One Hitter series. Another little gem from Lags in my book.

No label information. Doppel Sticky is brewed in the style of a German Altbier (Sticke), available in 12 oz. bottled 6 packs and on limited draft. 2015 Onehitter series release.

(Appearance) Pours a billowing creamy foam head of a pearl white tone over a mildly hazy golden amber body with moderate carbonation and high clarity. Retention is very good and lacing is light and patchy. 4.5

(Taste) Toasted bread malts, caramel malts and pale syrup body with a high cleanliness, finishes moderately bitter on the back end with flavors of piney, herbal and lemony hops. Assertive and flavorful with an enticingly delicate malt body. Very enjoyable. 4.25

(Mouthfeel) Texture is slick, lightly chewy, silky, clean, mildly dry. Carbonation is moderate, generating a medium frothiness and a briskly crisp finish. Body is short of medium for the style, medium+ overall. Balance is nearly even sweet to hoppy bitter. Alcohol presence is light and there are no off characters. 3.75

(Overall) A very satisfying German-influenced style that comes off as Americanized with the inclusion of a bright, flavorful and very bitter hops. Another enjoyable treat and reasonably priced offering from Lagunitas. 4.25

On tap at Petaluma and from a bottle. My all time favorite beer from Lagunitas. An elixir of the finest kind. Super hoppy and delicious ,not really an altbier in the traditional sense. Tasty AF.

A bit sweet for an altbier, but this was still very good. I had it on tap and was surprised that it was 66 IBUs, since I didn't really get much of a strong hop feel or taste. This was my first Lagunitas beer and I'll try more when I find them out and about town.

Pours a pale orange; I was expecting a much darker pour. Decent yeasty aroma, flavor was bitter with a semi-sweet almost caramellike aftertaste. Unspectacular.

On tap at the Pig + Fish in Rehoboth Beach, DE. Pours a crystalline gold with a thin off-white head. Initial impression is a lot of malt up front, followed by a lot of citrus and tropical fruit, with a slightly bitter finish. Moderate carbonation, medium body, slightly sticky mouthfeel. Alcohol is well hidden. My first altbier. Very enjoyable.

Taste: A lightly biscuity, bready maltiness given a little tickle of sweet honey. This one has an active, juicy fruitiness, tastes of pineapple, passion fruit and sweet orange zest. Fairly restrained bitterness. Growing sense of mint leaf. Fruity, lightly spicy and with a hint of the alcohol on the drying, gently bitterish finish.

Overall: While I'd hoped for an offering that was a little more faithful and authentic to the style, I'm honestly not surprised it's just another something-hoppy. Though, for being something more akin to an IPA, it was reasonably tasty.

Appearance: Clean golden, with limited head or lace in my mug served from draft at the Gerst Haus.

Nose: Lovely tropical hops and citrus. Really really impressive, and far from the alt bier style it was presented as. Not a bad thing, though!

Taste: Tropical citrus up front and center, and really smooth. Mango. Grapefruit. Orange. Very potently hopped. Don’t let the alt bier classification fool you — this one could go up against any heavily tropical-hopped IPAs with no trouble. Delicious and worthy!

T: a blend of pineapple and white grapefruit; at times, one or the other is dominant for a moment, but the two flavors keep coming back together; quite juicy; very little bitterness;

L - Golden yellow, huge head and sticky lace all over the glass. Some clarity, and lots of bubbles floating up to the top

O - Another tasty brew in the 1-hitter series.

L: Pours an orange copper with a little more than a finger of head. It lingers and leaves lacing all the way down the glass.

T: Citrus fruits with some pineyness at the end. Not much bitterness. Well done.

O: As far as I'm concerned this is an ipa. Totally different than the alts I have had. This is really, really good. Wish I bought more.

A: Pours a hazy burnt orange in color with moderate to heavy amounts of active visible carbonation rising quickly from the bottom of the glass and moderate honey + golden yellow highlights. The beer has a three finger tall foamy beige head that reduces to a mottled thick film covering the entire surface of the beer and a thick ring at the edges of the glass. Moderate amounts of lacing are observed.

M: Slightly heavier than medium bodied with moderate amounts of carbonation. Slightly sticky/syrupy with a hint of alcohol warming in the finish.

O: An interesting hybrid of an Altbier and IPA - I guess it could also be described as a hoppy Altbier. I found this one to be interesting and enjoyable though definitely not a traditional version of the style. Nice mouthfeel but a touch sweeter than I would have preferred.

Had on draft at Daily Bar and Grill in Chicago. Poured into a 12oz snifter.

(have also tried in a bottle, and was much less impressed, it's way better on draft)

L: Somewhat cloudy golden color, half finger of off-white head.It appears much lighter/thinner than it tastes.

S: Oh the hops. Gloriously dry-hopped, grassy herbal hop aroma is overwhelming in a good way. A good deal of citrusy hops as well. To my nose, there isn't much else, because I'm zeroed in on these fantastic hop aromas.

T: Altbier did you say? Nothing tastes "old" here. A very fruity hop bite leads to a nice bitter hop finish with no lingering chemical aftertaste as can be found in many hoppy beers. Sort of yeasty in the middle with little noticeable malt prescence and a clean finish. It's more of a fruity hop sweet, not a thick malty sweet if that makes sense. Taste is on par with the look, it does not taste as heavy as it is. The hop punch is present throughout and if I didn't know they were calling this an "Altbier" I would quickly label it a fantastic DIPA.

MF: Medium bodied at most, it is pretty deceptive. I threw back 6 without feeling full, they just go down smooth and aren't very heavy at all. It's no thirst quenching session IPA, but with the amount I drink it's easy to put back like a session beer.

O: I'm an IPA/DIPA guy but with Lagunitas I usually ignore the style of the beer and just sample it. This doesn't taste like any altbier I've had, it's WAY too hoppy, but it's fantastic for hop heads. Great balance, no bad aftertaste, just delicious hoppy love juice with fantastic smell due to the dry-hopping. Thanks Lagunitas, this is a sure winner in my book, I bought it over the Brown Shugga after trying on draft!

Poured from a 12 ounce bottle into a St Bernardus goblet. Stamped 261 5 2 0709 0116.
4.25/4.5/4
Surprisingly lustrous, hazy gold. Delicate white head.
It smells absolutely lovely. Estery spicy yeast, but the star is the dry-smelling but somehow still tropical hops. Dank, resinous pineapple.
Much lighter than anticipated from the ABV. It's a yeasty pale almost Belgiany flavor. Quite dry, floral, and mild. It's tantalizingly familar, yet somehow also new. Very interesting and engaging. More citrus from the hops than I thought there'd be. Aftertaste is tart and bitter-dry.
Overall, a really fun, interesting beer. Defied my expectations for the style and delighted my tastebuds.

Bright amber with a white head and lacing. Caramel malts and citrus explode in each sip, with biscuit and playful grass. Taste is the new quintessential american take on the style in my book. Huge caramel oozing into maple with dry earth, huge dark fruit colliding with bright citrus and grassy hops on the backend. Takes a classic and gives it the hops and sweetness that the american is built on (for better or worse). Feel is thick for style, but brightens and thins up in a hurry.

Okay to good beer but not one I'd seek out again. You could probably fool most craft beer drinkers into thinking this was a run of the mill IPA or APA if they didn't know better. Pours a golden yellow with a yeasty fruity smell. Hops are fruity and herbal, medium bitterness. Okay mouthfeel and body. The beer was enjoyable enough but meh.

I get bright grapefuit and assorted citrus on the nose, with a behind the scenes biscuit/maple note.

Very tasty and enjoyable creation, with a solid maple malt base, some light pepper and then over run by cirtic hops...in a good way

Bright golden with a big white head that stays around forever and leaves big chunky lacing. Notes of grapefruit, orange, tangerine and peach. Medium body, crisp and clean with spot on carbonation. Billed as an altbier, drinks like a balanced American IPA.

On tap at 2 Bros. Pours a translucent brownish gold color with over an inch of frothy white head. Lots of lacing.The aroma is lots of fruity and dank hops. Orange, mango, pineapple, and tangerine. The taste is more of that dank and fruity hops. Piney at times with lots of spicy hops. Bready towards the end with some caramel malts and warming alcohol. Dank finish. Oily mouthfeel. Overall, this hopped up twist on the style works amazingly well.

This beer is so dank and insanely fruity and aromatic. Just an assault on the senses, in the best possible way. Not an alt at all, but given Lagunitas' approach to brewing, it fits as an alt in their brewing spectrum. I love this beer.

O: I absolutely love what they've done with the hops here. It pops like a great IPA, bursting with Southern Hemisphere citrus and tropical fruit flavors. The sulfury bite from the unique fermentation feels out of place here though, and the alcohols tiptoe the line toward boozy territory. Still a pretty solid beer all things considered, but I'd love to see this hop profile revisited in a more traditional IPA.

Doppel Sticky from Lagunitas Brewing Company
Beer rating: 90 out of 100 with 284 ratings