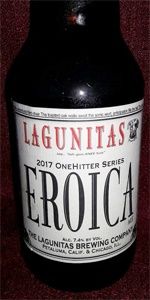 Notes: This is a Lagunitas-ified version of a traditional farmhouse ale, aged in red wine oak barrels and funkied up with Brettanomyces yeast. It’s a golden saison-sour with a nice tartness that leaves your buds quenched and wanting more. Proost!
View: Beers | Place Reviews
Reviews: 57 | Ratings: 189 | Log in to view all ratings and sort
Reviews by NickSMpls:

Nice amber pour, light fine head. Definite aroma ozf yeast and very ripe fruit. Lighter taste, low bitterness and a hint of sour flavor. Sipped slowly, enjoy the layers of flavor that open up as it warms. A bit light on the carbonation, but otherwise a solid offering.

Bought from BevMo! Love all of Lagunitas' OneHitters so far, but I have never had anything of this style before and at first I was disturbed. "What the hell is this? God damn it why does it smell like white wine? Why the hell did I buy this?"

But by the time I cracked the second bottle, I was ready to sit down and review it.

L: Pours with a foamy, active head and a cherry-tinged amber body dense with bubble streams. The brew stays carbonated for a good while, but the head dissipates quickly, leaving a ring around the glass, and no lacing to speak of at all.

S: Sour cherry, apricot, lemon, quince and young plum, then acetone, sour yogurt, and a faint woody musk that makes for a surprisingly appetizing finish. However, it's like no beer I've ever smelled, and it proudly proclaims that it will be an acquired taste.

T: Sour off the bat, with notes of pear, rhubarb, underripe plum, and lemon, however, a cheezy funkiness takes over rather quickly, followed by a drawn-out note of the aftertaste of cherry cough syrup, which made me wish I could take it back to the store for about half a beer. However, that sharp note dies in a fresh herbal bouquet featuring mint, cinnamon, anise and oak, and a creamy film clings to the tongue for a finish that is uncannily similar to nonfat greek yogurt.

F: Thin. This isn't in the lager range. It feels more like a soda, or even more like champagne. However, the crisp finish is unique to beer, and the creamy residue that clings to the tongue make for a super drinkable texture.

O: After a couple of these, I feel more against the act of drain pours than ever. I truly did not like this upon first sip. I didn't even like the smell of it; but I find it more inviting with each taste.

Definitely worth a try. Very very good and exceeded expectations. It was in a 12oz typical beer bottle, and felt like after tasting it should have been in something fancier.

Stepping out of their hoppy comfort zone, the brewers at Lagunitas found themselves some red wine barrels and a whim to do something rustic, something old, something sour, something non-bitter.

And Eroica was born; a muted ruby ale with slight haze and a scant creme froth. Heavy handed with grape aromas, hints of cherry, apple and plum lurk in the recesses of scent and play out with a strong wine-like presence. Its taste is steely sweet and laced with light caramel and hard candy.

As the middle palate unfolds, the beer's fruitiness only gains intensity and shares a world of cranberry, raspberry, black cherry, date and apricot to go along with its strong vinous presence. Tart with balsamic and fruit acidity, a light acetic action creates a savory cider and vinegar combination that rolls into a peppery finish of toasted oak, peppercorn, cinnamon and red wine.

Medium bodied for sour ale, the beer's residual sweetness remains candied and resonating on the finish like flat cola and stale wine. Moderate alcohol, vinous spice and a medium intense acidity all aid in the dryness of the beer while its fruity demeanor keeps the taste savory and sweet. A medium length aftertaste of red wine and grape koolaid keeps the session fruity and floral 'til the not-so-bitter end.

This beer is grand. Without a doubt it is one of the better offerings from Lagunitas. Pours an soft amber color with a firm tight sepia head that lingers like a stout. Smells tart like sourdough. Such a bright crisp tasty finish. The bettanomyce and other ingredient choices come together for a superior experience. I could drink this all day. But I won't. We're saving this brew for the first day of spring

This brilliantly clear amber beer is crowned with a mild foamy khaki head the quickly decides to leave the room without a trace.

The musty acidity and wood don't allow much else to come through except for a suggestion of raspberries.

Oak tannins and a medium tartness are about all that meets the tongue.

The feel is thin, acidic, and has a mild alcohol warmth.

Overall, this felt like I was drinking more of a white wine than a beer. It's not bad by any means, but perhaps a bit one dimensional. Cheers!

12 ounce bottle poured into a tulip

A: Pours a golden amber color with a white head, no retention, no lacing, very little carbonation.

A: Sour, red wine vinegar, oak, tart cherries, light funk, no alcohol on the nose, pretty straightforward, not as much complexity or depth as other flanders oud bruin beers I've rated.

O: A very light sour beer, lacks a lot of complexity and depth of other sour beers, aromas and flavors are subtle, needs more sour and tart notes, didn't get as much barrel as I was expecting.

A crystal clear amber to almost a red shade. Small white head that dissipates quickly. Not much for lacing. Good amount of carbonation rising. The aroma is Tart raspberry jam, green apple, and, actually lots of tart berry smells. The flavor, the same, and kind of a cool, almost bleu cheese vibe. Very dry in the feel, with full carbonation, and medium-ish body. Overall, very refreshing with a nice tartness that appeals to me.

I would like it to be a bit more tart. It's nice but I have had others in the style that I like more.

Man Lagunitas just keeps kicking out the jams with these beers since their "corporate" buyout. Couldn't resist picking up a 6 pack of this, the commercial hand job basically made me feel like this was an extinct hop. Now when I got here, I was surprised to see it classified as an oud bruin, seems like it was gonna be an ipa or a wild ale. But I get it, it does have characteristics of all 3.

Pours an amber color that is generally a little brighter than most oud bruins I've seen. That's cool, smallish off white head on top in the 1/3" range. Aroma was sour, I thought red wine barrel like and a little bit of dry hopping.
There was that maltiness familiar in an oud bruin of brown nature, but the sourness seemed far more intense than a traditional oud bruin. Was this for the better though? I think so.