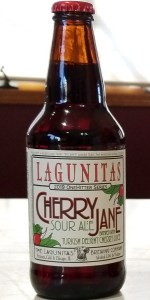 Notes: This sweet tart sour ale is full of Turkish Delight cherries, giving it a puckered up punch of cherry charm, then it's fermented with some Brettanomyces for that extra funky funk. We love you, Cherry Jane. Do ya?
View: Beers | Place Reviews
Reviews: 49 | Ratings: 161 | Log in to view all ratings and sort

Excellent color. Nose is cherry jam, cinnamon and cherry pit and skin. Simple but very aromatic and pleasant. Beer opens sweet and slightly tart cherry. Some pit in the middle mixed with a nice yeasty sweetness before abruptly ending with no aftertaste. Not exactly a beer that makes you think but pretty good nonetheless. Body is light with ample carbonation. Prickly and lively on the palate and goes down crisp and clean with a dry finish. Very drinkable.

A solid cherry beer. No more, no less.

This beer is very pink with a large foamy frothy pink head. And it smells a bit like cherries. They taste like sour cherries it’s really pretty sour and little bit balsamic vinegar. Medium crispy body with moderate carbonation.

Body is raspberry red Kool Aid with a sudsy pink strawberry mousse head that leaves pretty lacing. Smells like a sour. I'm picking out cherries (duh) and watermelon. Taste is all wheat and sharp, rotting fruit. Sour and mouth-puckering without being too overpowering. A pleasant, well-made beer, but not really my thing.

Finally somebody gets a cherry sour right! Not too overly cloying sweet (like Kasteel Rouge) but also not so sour that you think you're drinking balsamic vinegar. The perfect balance, which must be really hard to achieve since this is the first beer I've found to do it.

Candy - red beer, dark red and clear. The nose is fruit and grassy notes. Dry taste, of course it's sour but not puckering level. Good balance and carbonation is right on. We take these in small doses, but enjoy them as a change from the APA and IPA which dominate the beer fridge. Bottled in late Nov '19 and tasted in late Feb '20.

Clear dark red with three fingers of pink head. Rings and swathes of lace appear as the level drops.
Smell is cherry.
Taste is sour tart cherries.
Mouthfeel is light to medium with good carbonation. Finish is dry and tart.
Overall a tasty sour ale.

12 oz bottle served in a Belgian snifter.
Pours with a clear body that looks like cranberry juice but with a pinkish white head.
Smells very sour and it is. The cherry addition is way more pronounced in the flavor where sour and sweet cherry notes mix with the very tart base.
Medium body with medium carbonation.
Overall: Very sour with plenty of cherry flavor.

Deep red color. reminiscent of a cherry lambic sans yeasty flavor. No bitterness to speak of. Moderate lacing. Very pleasant beer in most respects. Honestly wish it was a lambic lol

Pours a clear dark red color with 3 fingers of head. Scent is good, not great, malt and cherry, but not vibrant. The taste makes up for it. Very tart and cherry, no bitterness. Light mouthfeel and and aftertaste that follows the tart and cherry taste. This one could be dangerous as I can see easily crushing 12+ in a sitting

Tasted in a Rastal Teku from a 12 fl oz bottle on August 30, 2018. Brewed with Turkish Delight cherries and fermented with Brettanomyces. A nice blend of tart cherry and wild yeast funk.

Overall one heck of a good cherry ale not as good as Samuel Smiths but pretty close!

Poured into a small chalice: color is near red, quite dark which i guess is ruby but then also transparent; head is white with fine bubbles and presents with some depth, but that is gone within 10 minutes after the initial pour.

Smell might be the highlight of this ale - there is some funk, some cherry juice sweetness, hints of toast and even light nuttiness from the malt. On the pour i had expectations of a bit less depth but this is good.

Taste follows the aroma with good light funk, light cherry juice, light toast and nutty malts. As some have indicated this hits it pretty much straight down the fruited ale and funky ale line, therefore i could go for more funk but the malt depth is a good compliment to the sweetness.

Mouthfeel balances the sweet and tart line with hint of earthiness. Sweet from the cherry juice and tart from the brett yeast.

Overall a decent sweet sour, a bit on the sweet side but its executed well with pleasant malty aromas and flavors.

Too sweet for a sour. Cloying sweetness. Almost a cough syrup quality. I really enjoy the one hitter series. Unfortunately this one was a miss for me.

I know that I purport to be anti-bottle, but there are some beers which are just so compelling that I feel that I must procure one, even if it does come in a bottled form. Lagunitas makes beers which are usually compelling enough for me to break my vows.

From the Bottle: "'From Prunus,' said Brutus as he took in a taste. 'That's Cherry!' cried Mary, with a bright rosy face. 'An ale?' posed Gail, her mind run a-race. 'It's beer!' answered Greer, 'This is all just a waste!' or whatever …"; "Beer Speaks. People Mumble."; "Brewed with Turkish Delight Cherry Juice".

I Pop!ped the cap & although I had no idea of what to expect, I did not see any discernible lees so I went with a C-line pour. I was surprid and amazed as it quickly formed just under two fingers of dense, foamy, rocky, deep-pink head! It even left behind some pretty lacing, which is unusual in this style. Color was Magenta (SRM = N/A) with NE-quality clarity. Nose had the deep, rich tartness of Michigan sour cherries! Mmm. Mouthfeel was thin-to-medium, not watery, but not big enough to consider medium-bodied, either. The taste was full-on tart with cherries, but I was not really getting a sense of Brett. Frankly, I really liked it as such. It reminded me of cherry preserves and cherry butter from Michigan, both of which I procured many years ago while on my twilight tour on Diego Garcia. I had gone sober & I was using the year to shape up & get clean so I was spending my money on mail order books, foodstuffs & assorted geegaws to help pass the time. The Michigan cherries were a revelation & I had a LOT of Michiganders stopping by for toast & coffee! They could have called this a Fruit Beer & I would have been equally happy. It was more tart than sour, but that was good, IMHO. Finish was quite dry & full of cherry flavor, so there was also truth in advertising. I actually bought a sixer & I am going to cellar some to see of the Brett asserts itself.

Looks kind of a like a rose wine with very little head or lacing. Smell is pleasant, rather sweet, and definitely of cherries. Flavor is good. Not the usual cherry flavor. Whether or not that's because of the use of Turkish cherries, I do not know.

I find the flavor a bit more sweet than sour. I think I would have preferred more tartness. But overall, this is a very refreshing drink. I wish they made a version with a higher ABV.

This beer pours a rather gorgeous clear scarlet with a moderate pink head. The aroma is simple, but deep, with sweet cherry, cinnamon, and a hint of green apple. The flavor starts bright and sour, with a mix of ripe and overripe cherries, and a hint of onions green. The mouthfeel is medium bodied with a stinging sour-astringent finish. Overall a pleasant enough sour, with clear cherry and a bit of spice, but if anything it is a touch boring.

Poured from bottle into chalice good 1 finger pink head recedes quickly to a pool then dissipates, good lacing. Clear red in the glass, like a good old cherry koolaid. Smells of lactic, lemon and cherry, there is a mild underlying funk peeking out. Taste is initially smooth cherry, lemon, with a big cherry tart dry finish. The nicest part of this beer is there is a lingering cherry finish on the palate, which pretty much makes this just awesome in some respects. Another solid one hitter, going to have to hide this from my daughters, they will demolish it.

Picked this up when I was passing through Redding, unsure if it was going to show up in Nevada. Pours a dark red to brown color, produces a 5/8" pink head. The aroma substantiates the commercial tugjob related to the Turkish Delight cherries, they are here and as advertised, some nice middle ground cherry notes, not too tart, not too sweet, not too dry.

Taste offers a middle of the road cherry profile as well. I didn't really pick up much if anything in the way of a brett character. I'll definitely lay down a few of these from the six pack and see how they develop over the next year or two. On the sour scale, I would say this is a 4pt'r on the 10pt scale.

Its clearly not world class stuff, but what you do get is a good value and a good beer. I mean, less than $2 a bottle. Sure, you can spend $20 for something better in the same class, but maybe you need a new roof and need to save some money. Well carbonated cherry wild ale. Could get even better with age once some brett notes develop.

The beer pours out a clear dark red/burgundy color, with 1 finger of pink head(lovely looking beer)--------------- the aromas are of tart cherries, funk and red wine---------------- the flavors are of sour cherry and wheat up front then it dries out and finishes thin like cherry kool-aid------------------- overall this beer was ok - the look and aroma on this beer were Awsome, I was hoping for the flavor to be a little more intense and funky like the nose but it was more subtle and thin---

Tart and sour, just enough to make you jaw tighten a smidge. Lots of cherry juice throughout, little woodiness on the finish. Oh, and beautiful red color with a quarter inch of fizzy head on the pour that quickly disappears. Not bad.

Gingerbread cherry sour, very good, but not in the same category as great sours of this cherry flavor style, but for $1.84 a 12oz, it's great, considering a top tier sour of this style would be at least 10x the price. So not of "the best", but great in its own way and I really like the gingerbread if that's what I'm tasting. Very nice cherry flavor throughout from beginning through finish that lingers. A bit watered down feel that seperates it from the greats like Cuvee De Tonne or Supplication that are similar but much fuller, deeper, etc... But again for $1.84 it's great, especially considering the great stuff isn't avaliable here anyway.

Tigerbrau from Louisiana, Aug 10, 2018
Cherry Jane from Lagunitas Brewing Company
Beer rating: 88 out of 100 with 161 ratings