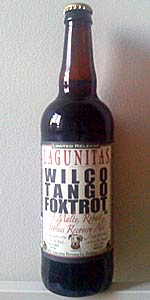 Notes: Rich, smooth, dangerous, and chocolatey. It's a big ol' hoppy Imperial Brown Ale to help you with your slippery slide on into the heat of the night.
View: Beers | Place Reviews
Reviews: 875 | Ratings: 2,693 | Log in to view all ratings and sort
Reviews by RichardWeed:

Enjoyed the hoppiness of this fine brew. Very interesting flavor palette. I like a brew with a nice, grassy feel and taste and this one had just that. I will definetly be spending more on this the next time i make the run.

Partaken from the 22 oz bottle in a snifter. This decent brown pours a clear
orange tinged brown color with a very nice head of off white foam that settles
to a thick ring, thin pool, and showcases some nice light lacing. Nose of pine, tropical
mango and pineapple notes, and a medium malty background. Flavors lightly exceed
the nose but feature the same characters as in most of the Lagunitas brews. Citrus hop
and subtle pine overtake the malty notes of caramel and beat them into submission. Sadly
it is like I have had this one before from this company under a myriad of different names with
a touch different malt profile. Much like the Censored or even the Scottish but also close to the
Brown Shugga. Malts show themselves but take a back seat to the hop profile they are known
for. Nice mouth feel; medium body, medium high carbonation, and a lightly sweet citrus and pine
laden hop finish.

Overall, a good ale, but it is hard to distinguish one from another with the addition of the
hops. I like their ales, but even the brown has the same notes as many of the others that are
too numerous to mention. Good but sadly it is becoming apparent that they are choosing to
be a one trick pony missing out on balance and light singular additions of hops. It would
be refreshing to see a SMASH ale from them.

Taste, hoppy and malty, this is much like something around Arrogant Bastard Ale and SN Harvest Ale. Which is to say its fabulous. A little more citrusy than those. Alcohol less pronounced.

Poured in to a pint glass and manifests a translucent brown ale, minimal off white head. Some pine, grapefruit and medium roasted malts. Brown Pale Ale seems to be an appropriate descriptor. The malt character is pretty robust but there is a bizarre clash between the grapefruit and the malt that creates an off aroma and taste. This brew cannot really seem to reconcile the malt and hop element thought both would be superb on their own. The carbonation is medium and feels appropriate for this hybrid and there is a real sweet aftertaste that masks the 7.8%. Overall a very interesting beverage but I don't really think the citrus hops belong here.

A brown and ruby red blend with an inch of foamy, off white head. It leaves a thick ring around the edges. Malty sweet aroma. Brown sugar and caramel. Some cherry and faint amount of raisin. Fruity malt flavor upfront. Bready caramel backbone with cherries and raisins. The middle is slightly sweet with more of a grape twist than raisin. Finishes dry. I was expecting a tangy sweet end but this dryness was surprising. In a good way. As the beer warms the 8% shines through. The cherry flavor turns medicinal. I am a fan of the flavor combinations just not when it warms up a bit.

Chestnut brown with a reddish hue and perfect clarity. Poured with a thick, dense foam that slowly dissipated and left random sticky lacings on the glass. Pungent, fresh, citrus hop aromas with pine hops, toffee and sweet caramel malt beneath. Thick, syrupy feel despite the agressive, slightly fizzy carbonation. Pungent grapefruit and citrus hops up front followed by a tangy and brown sugary sweetness through the middle - a signature taste for Lagunitas brews. Citrus hop bitterness trends to pine hop flavors to the end. A strong sweet caramel malt backbone flavor throughout. Finished with a malty and pine bitter aftertaste.

Picked this up at the COOP today.. foamy lite tan head.. great lacing atop a brown/deep amber brew.. very clear.

Nose has a pretty resinous assault when cooler.. but some toasty malts battle back with warmth..

Nice malty backbone that still has plenty of oily hoppiness.. pine and pineapple.. fruity with some pithy grapefruit zest... definitely has some toasty nutty maltiness... I can pull dry cocoa if I try.. some zesty spiciness shows as it really warms up.. nice medium body and a good carbonation that is everpresent yet very smooth.. the finish has the slight brown malt flavor with some heavy toast and plenty of citrus hops that lingers for a long while.

Tastes very fresh.. but it also seems a bit discombobulated.... but I guess I like the mash-up of flavors.

This really is a "WTF" beer.. all the makings of a Black IPA, big Brown, American Strong... etc... Pretty nice, but it has a hop profile that I am finding in many of the Lagunitas brews lately.. too similar... but the malts really do play with it nicely.

Pours a clear reddish brown, with fluffy offwhite head, clumps of lace here and there. Smell: it's like a slightly toned down Hop Stoopid: pineapple, tangerine, and spicy. Backdrop of dark brown sugar. Taste: leafy, pineapple, prickly, a little citrus peel, lots of caramel. There's a very light roasty taste left at the end of the sip. Mouthfeel: medium bodied, a little syrupy but with an uplifting fluffy feel (is wheat for body a new trend for Lagunitas?). Doesn't scream impy brown to me... but Brown IPA, for sure. Very nice.

22oz bomber poured into a snifter. No date on bottle.

Appearance: Brown on the table with a off-white head. Ruby red when held up to the light. Delicate strands of lacing all over the glass with a ring of foam at the edge, but just the wisp of a foam across the top. Nice looking beer.

Smell: Perfectly blended orange citrus with a hint of grapefruit and a wonderful sweet malt at the end. Very appealing.

Taste: Hop forward, but not overpowering. Hint of citrus up front, then smooth malt sweetness to balance out all the hops, and then a bitter grapefruit finish. Malt flavor is hard to place - it's sweet, but not caramel exactly.

Mouthfeel: Just right carbonation on the tongue with a very smooth texture. Doesn't cling to the teeth at all despite being so hoppy.

Overall / Drinkability: "A Robust Malty Ale" must mean robust in the hops, but the malts here do an outstanding job balancing out the hop whollop that this brewer typically puts out. Definitely hoppy, but the hops do a good job balancing it out, making it a beer worth sipping as well as knocking back. The name of the beer drew me in originally but this is a good beer worth revisiting again and it stands all on its own as a good beer.

A - Very pretty dark almost a cola appears. Has a small (1/4 inch or less) head even with an aggressive pour. Lacing stays for a long time after each sip.

T - Light hops with a grapefruit/citrus smell. Very sweet on the back end. Hides the alcohol pretty well, but still does have a little of the alcoholness.

M - Thin with mediums amounts of carbonation, and coats the mouth with hop oils after.

D - Very warming and filling, a good beer to go with the title as if fills you up and warms you up. Pretty good drinkablity I could have a couple glasses

Wilco Tango Foxtrot from Lagunitas Brewing Company
Beer rating: 88 out of 100 with 2693 ratings