Liquor With A Twist 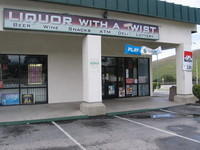 View: Place Reviews
Reviews: 2 | Ratings: 3 | Log in to view all ratings and sort

Has a basic liqour mart layout with mostly refreshments and not too much beer but the beer selection is alright considering they have little to offer. Cool place in diamond bar to get brew cause I barely moved here and really haven't found a joint close by that carries decent beer. Service was good and friendly and enjoyed my visit for the first time. I think they have to step their game on the beer selection if they wanna compete with other liqour stores that are close by with better brews. I guess I'll be making more trips here in the near future.

This store is located in a strip mall across the parking lot from Oak Tree Lanes. I remembered them having sent out some advertisements to Diamond Bar residents back when the opened up (and when I lived in Diamond Bar) a couple months back.

I was on the way to my girlfriend's house and saw the place and figured I would stop in to finally check it out.

The store is a decent size for a liquor store, and the shelves are fairly spread out. There are quite a few cooler doors which gave me hope there might be some good stuff inside.

The beer selection was rather eclectic, without much rhyme or reason. There were some nice craft beer offerings from Avery, Lagunitas, Stone, Moylans, and some of the other CA standbys. But nothing difficult to find. They had some interesting malt liquors and plenty of BMC (most of which were available in singles, surprisingly).

The service was okay, nothing amazing. But, the man working there was at least attentive and fairly polite.

Liquor With A Twist in Diamond Bar, CA
Place rating: 3.35 out of 5 with 3 ratings