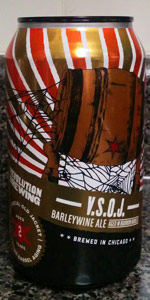 2021: A cuvée of English Barlewines aged between two and four years in our favorite bourbon barrels. Lusciously sweet and colossally complex, V.S.O.J. is equal parts refinement and excess.

2018: A celebration of malt, oak, and patience, Very Special Old [Straight] Jacket is a cuvée of English Barleywines each aged between two and three years in our favorite bourbon barrels. Lusciously sweet and colossally complex, V.S.O.J. is equal parts refinement and excess. Enjoy life now, or store cold.

4.26/5  rDev -9%
look: 4 | smell: 4.25 | taste: 4.25 | feel: 4.5 | overall: 4.25
12oz can at share. Dark brown pour with a foamy beige head. Aroma is malty, toffee, prunes, , hint of vanilla. Taste is malty, leathery, sweet, caramel, light chocolate, pit fruit. Smooth and strong. Aroma of malt, chocolate, caramel, vanilla and bourbon. Malty and caramelly flavor with chocolate and raisin leading into a vanilla and bourbon finish. Had side by side with Straight Jacket and this one definitely smelled and tasted more chocolatey and caramelly; more decadent. World class BW.
Thursday at 04:21 AM

And what magnificent aromas greet you - rich English toffee, vanilla, a bit of fig, oak, and a smidge of booze, all in perfect balance. I am literally drooling.

The toffee is forward on the taste as expected, but it willingly allows room for the vanilla (hurray!), oak (double hurray!), and especially the fig (cubed hurray!) that provides balance to the sweetness of the other components and coasts into the boozy warming at the back of the palate. Simply stunning flavor profile and nuance to a beer this big (13.8% ABV).

The mouthfeel is creamy and more than a bit oily, as expected. I sat on this a bit, and it was more than worth the wait. Truly a world class English barleywine.

4.7/5  rDev +0.4%
look: 4.25 | smell: 4.75 | taste: 4.75 | feel: 4.5 | overall: 4.75
Pours a dark burgundy that reveals a remarkably clear transparency when held directly against a light. If not held against a light, or if poured in a dark room, the beer looks black. Moderately heavy oily legs form on the glass after a light swirl, foreshadowing a heavy, hearty beer. Head is two and a half fingers of khaki foam.

Aroma is raisins, fig, toffee, molasses, and dark fruits mashed together with leathery, spicy bourbon. Barrel adds additional char and heat, which is smoothed out well by hearty caramel, toasty, and bready malts. That dark fruit character really starts to swell up and become a much more major player in the aroma as the beer warms.

Flavor profile is fig, raisins, toffee, molasses, brown sugar, and hearty dark fruits. Grassy hops add some resinous hop presence, which introduces some pleasant variation to the profile that is not a sugary note, heavy malt, or bourbon. Bourbon is present throughout, but becomes much more present on the back half of the flavor profile, building up heat and complexity akin to the way a snowball builds rolling down a hill. Despite that build up, it never runs away with heat. Underneath it all is strong caramel, bready, and toasty malts.

Mouth feel is thick with a still effervescence, offering up some light bubbles at the start before smoothing out at the mid-way point. A very light silt adds some further texture, but really, it's smooth. The texture matches, both, the aging process output, and alcohol, suggesting this beer has been slowly pressed flat by the act of time and heavy alcohol.

For kicks, this was served side-by-side with Piggyback 6yr Rye aged in V.S.O.J. barrels. This is a sample from barrel #1. A few notes: Dark coloration, with moderate oily legs after a swirl. Spicy rye on the cusp of the nose, with heavy barrel leading way to floral and mild bourbon and dark fruits behind. Complexity is dense, mixing in a little cake at the finish. Flavor profile brings a more mild profile, building spicy rye over oak, lemon zest, floral and mild dark fruits and bourbon. Spice simmers on the back of the palate long after a sip, emphasizing the rye base. Really smooth, with a crescendo from start to finish that resembles a wheelchair ramp - a linear rise from start to finish.

Served neat in a Glencairn glass.

One I’ve been wanting to try for awhile. Revolution Barleywine base with a higher carb than I’m used to, but doesn’t detract at all from the beautiful complexity of oak, molasses, caramel, and bourbon. Mild esters and warmth on the tail.

Reviewed by Sandis from Minnesota

4.64/5  rDev -0.9%
look: 4.25 | smell: 4.5 | taste: 4.75 | feel: 4.5 | overall: 4.75
I received a can of this famous Barleywine from @fbarber in the NBS BIF #14. Can dated 6/29/2021. Poured into a Revolution Deep Wood Series glass also received from Mr. Barber. It pours a deep cola color with a fizzy, light khaki-colored head that dissipated quickly. It boasts a great Barleywine smell with toffee, brown sugar, raisin, plum, tobacco smoke, oak, and subtle but discernible bourbon. The taste is ridiculous! It's particularly fruity with lots of raisin, plum, and fig, along with loads of brown sugar and toffee, oaky char, tobacco, and a strong, hot bourbon presence. There is little bitterness. The tastes really pop; it's incredibly flavorful. Its mouthfeel is rich and creamy with appropriate and pleasant carbonation, and there's no escaping the 15% ABV; you can feel the alcohol burn. Overall, V.S.O.J is simply exquisite; one of the best English Barleywines I've had the pleasure to drink.
Jan 08, 2022

Rated by LloydDobler from Indiana

4.74/5  rDev +1.3%
look: 4.75 | smell: 4.5 | taste: 4.75 | feel: 4.75 | overall: 5
Received courtesy of @ovaltine in NBW BIF#14
Poured dark reddish brown with minimal head that dissipated quickly, no discernible foam either, but continuous bubbles appear from the depths of the glass.
The aroma was bourbon and malts, taste is almost sweet but isn’t, not sure how that happens. Figs, raisins, plums all swirling in the bourbon.
The taste rather follows, just more intense, amazing flavors and the 15% ABV is well hidden. Really, really good.
The feel is viscous enough to carry the weight of the flavors without being cloying. Great sipper!
OA, I think I need to find this whenever it shows up and get some.

Smell - The nose was sweet. Notes of caramel and earthy malts came before the booze.

Taste - Oh my! Caramel lead the way, followed by leather and mild bourbon. The booze was so perfectly balanced that it took nothing away from the base beer. This is an example of a beer that slept well in barrels. The profile was modestly warming but certainly did not burn.

Mouthfeel - The body was thick but not cloying. It lingered just long enough to have me wanting more.

Overall - This was a fantastic beer.

Caramel, vanilla, toffee, oak. Massive barrel. Beautiful warming bourbon. The barrels are incredible. Everything is amazing here. Warming, but the 15% doesn’t show. Has some coconut as well. Light cocoa. Raisins, figs. Everything is here. This is a masterpiece.

Reviewed by clausthaler from Massachusetts