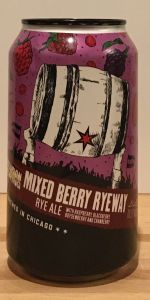 Rated by zonker17 from Texas

The smell is bright berries, chocolate, oak, and whiskey.

The taste has huge notes of raspberries and blackberries with oak and vanilla and a strong rye finish.

The mouthfeel is a bit thinner than expected but it didn't detract.

Overall this is very unique and exceptionally enjoyable.

The explosion of berries is absolutely stunning up front. It's almost puckering, yet it's not actually sour. It's such a massive punch of fruit, but in some crazy way tolerable and even cooperative with the ryewine, coming across like fruit leather and that gooey, sticky edge around a just baked strawberry rhubarb pie or blackberry cobbler. It takes a moment to dig deeper, but after a second exhale, deeply luscious nougat and caramel swirl in from the barrel and Ryeway.

Subsequent sips bring out those #life characteristics even more, as dark malty gingersnap, molasses and char are peppered still by super seedy blackberry jam, before coming to an impressively powder dry finish.

This is an adventure that far exceeds any expectations I had. I thought their Strawberry Jacket was a stunning feat, but this is just over the top, in all the best of ways.

Pours a dense, semi-viscous, jet-purple body capped with a half-finger of ruddy pink foam that fades almost as quickly as it forms to a nonexistent cap, temporary, fuzzy collar, and no lacing clinging to the walls of the glass.

Aroma opens with a boggy array of blackberry and raspberry enveloping softer notes of cocoa, oak, and vanilla across the bouquet; fuller bourbon presence is hinted at intermittently, though a wine-like, tannic grape quality comes to dominate as the beer warms; a dense, thick, and largely fruit-forward bouquet.

Taste shows a rounded, somewhat understated display of bourbon, caramel, brown bread, and vanilla laying a foundation for a dense berry medley, highlighting fresh boysenberry and blackberry upfront as cranberry and raspberry steadily accent; tannic red grape briefly 'pops' over the mid-palate as a dusting of cacao and blackberry mark the finish.

Mouthfeel shows a medium-full body playing off of a stiff, lower-end carbonation dispersing a light prickle along the palate; juicy and delicately tart through the mid-palate, while fading to a mild, tannic acidity into the back end; a syrupy texture builds and briefly threatens to overwhelm the finish, but dries just enough for a more composed close; minimal alcohol presence/warmth lingering.

With the rye ale base all but masked entirely, it's clear the oak and fruit additions are left to make their mark, and while the barrel-aging adds a unique layer, I'm not sure it meshes well enough with the stronger berry profile to feel entirely important to a grander profile; the idea is creative and coherent, and the execution is steady, but the final product can't quite shake the notion of uneasily marrying two disparate elements.

Reviewed by michaelsmith11 from Illinois

This can was removed from a fridge that carries fairly constant temps around 36 - 40 degrees.

The can was opened and poured into a small snifter.

Let me start off by saying...I don't know how to rate this beer to style. It's a rye ale, which is effectively a barleywine-style ale, but done with rye. So, that's uncommon. Now, let's throw a mess of berries into it. There's no style for that.

First impressions: This beer poured with effectively no carbonation, although not quite flat. No immediate aromas noticed during the pour. Pour was much brighter red/mixed berry (yea, that's a color) than anticipated.

Smell: The nose is not overpowering; in fact, it's rather subdued. It's strong on the raspberry - crannberry - "cough medicine Mixed berry" front. Took me awhile to place the last descriptor, but it's seemingly spot on for daytime theraflu liquid. It even has that slight alcohol-burn as you smell it that is a mix of almost fake-smelling berries. In this case, it's not, obviously. Score: 4.0

Taste: There's both at once a lot going on and not much at all going on. There are a lot of flavors, but they all mesh together well. Normally that's a good thing, but here it's giving off that medicinal vibe. I will say that this was much less noticeable when it was cold; but at room temp, it's super noticeable. When cold, it gave off more of that raspberry tart (new glarus) flavor, and less of the crannbery-tart flavor that I am getting when warm. I have to search pretty hard for the base beer. I couldn't even tell you that there was any barrel in this. Comparative to a BC-style fruit beer, this would be scored lower; but I think this score is probably more "fair" for "the style." But *shrug*. Score: 4.0

Mouthfeel: Despite all the berries, this has a pretty typical mouthfeel for the base. The only difference is that it's perhaps a little more thin, and perhaps the lack of carbonation. Score: 4.5

Overall, I'm pretty neutral on this beer. In general, I don't love (or, to some degree even like) fruit in beer. They just always seem to go more tart than I want. Both cherries and berries seem to give me that medicinal taste, which can be a turnoff. I don't dislike this, I'm just not sure that I like it. About 6 ounces is probably perfect (especially if I could drink it while it is completely cold), but 12 ounces is a little much. Score: 4.25

Reviewed by Luscious_Malfoy from Illinois

4.46/5  rDev +3.7%
look: 4.25 | smell: 4.5 | taste: 4.5 | feel: 4.25 | overall: 4.5
poured from a 16oz crowler into a snifter. pours like prune juice into the glass. so much berry that ryeway’s typical barleywine look is turned to deep purple. smells of tart, dark fruits, bourbon and caramel. taste is a lovely amalgamation of caramel, bourbon and berries. one doesn’t really dominate the other but the rye wine caramel is strong enough to cut the tart berry flavors. a medium-bodied mouthfeel that’s slick and smooth making this very easily drinking for such a big rye wine. i enjoyed this much more than i thought i would. incredibly balanced and the berries play in perfect harmony with they rich, caramel-forward base beer. the bourbon barrel-aging brings the whole package together.
Aug 14, 2020
Rated: 4.12 by Dactrius from Netherlands Antilles

Excellent berry aromas and flavors, but the barrels are light and the Ryeway base is not as well integrated and allowed to shine as last summer’s Strawberry Jacket was. I know, it’s not the same base... Still, it’s delicious and have plenty more to see how it changes over time.

Reviewed by kevanb from Illinois

The beer pours a nice burgundy color, super thick and opaque with a thin pinkish head that dissipates immediately and offers no retention nor lacing. The aroma is nice, tons of rich berries, blackberry jam with some tart raspberry puree, hearty dark brown bread, warm oak and just a touch of spirit as it warms, which does bring out a bit of vanilla and brown sugar. The flavors are good, tons and tons of blackberry jam, raspberry puree is nice, the cranberry is much more pronounced on the palate and offers a great tartness while the barrel comes across nicely, warm and oaky with a slight char and a hint of spice from the spirit and the graininess almost comes across like a pie crust with a nice brown sugar quality. The mouthfeel is good, coating and thicker medium body with a touch of liveliness and a tart and warm finish.

4.23/5  rDev -1.6%
look: 4.75 | smell: 4.25 | taste: 4.25 | feel: 3.75 | overall: 4.25
Pours a dark purplish-red with pink head, so that's fun. The base Ryeway is more evident on the nose than the palate; the aroma is thickly malty, with the boysenberry leading the fruit parade, followed closely by the blackberry. To me, the cranberry is the strongest contributor on the palate, with a refreshing tartness that does not verge into funk or sour territory. Out of Revolution's fruited releases from recent years, the closest comparison is Code Switch, thanks to the nose and the dry finish. Really enjoyable, and I'm hoping that it will become more jammy with time like Strawberry Jacket has.
Jul 21, 2020

A lot going on here, and it's ultimately balanced. Not quite as good as Strawberry Jacket, but a nice fruited barley(rye)wine. I'd have another...