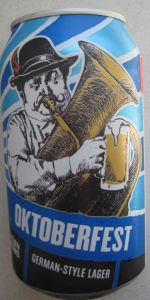 Notes: A classic German-style Oktoberfest beer that goes down smooth with a pleasant, toasty malt flavor. 100% German malts create a supple and flavorful base for this traditional Oktoberfest lager. Our 2015 version is brewed with a hop called Hallertau Gold, grown on only one farm in the whole of Bavaria to deliver a hop profile which is at the same time both classic and unique.

I picked up a can of Revolution's Oktoberfest last week for $1.79 at The Lager Mill. It's a little past Oktoberfest and I was a little late at finding this beer, but regardless lets see how it goes. 2017 Vintage. Poured from a 12oz can into an Oktoberfest Stein.

A- The can looks good, it has a nice design and it's eye catching. It poured a nice golden amber color which took on more of a golden color when held to the light and it had almost two fingers worth of off white and tan creamy head that died down to a thin ring that stayed till the end and it didn't leave much lacing behind. This is a pretty nice looking beer, but I wish it had a little better lacing.

S- The aroma starts off with a higher amount of medium sweetness with a yeast and doughy aroma being the first to show up and it also imparts a little bit of apple cider like aroma. Up next comes some herbal hops.green hops, and light generic hops aroma and a little fruity aromas, Towards the end comes the malts which impart some caramel malt, lightly toasted malt, sweet malt, bread crust and light doughy aromas. This beer has a nice aroma, but the yeast is a little too strong.

T- The taste seems to be similar to the aroma, but stronger and it starts off with a slightly higher amount of medium sweetness with the yeast still being the first to show up and it shows up more than it did in the aroma while imparting all the same aspects. Up next comes the hops which also impart all the same aspects with the herbal hops sticking out the most. Towards the end comes the malts which impart all the same aspects with the caramel malts seeming to stick out the most and the sweet malts show up just a little more than they did in the aroma. On the finish there's a slightly lower amount of medium bitterness with a herbal hop, yeasty and slightly malty aftertaste. This is a decent tasting beer, but I think the yeast is just too strong with this one.

M- A little smooth, crisp, not too clean, on the lighter side of being medium bodied with a higher amount of medium carbonation. The mouthfeel is decent, but I wish it was smoother.

Overall I thought this was a decent beer and it was just a little bit above average for the style,e it seemed to be going in the right direction, but those yeast flavors got out of hand and they ended up holding this beer back. This beer didn't have the best drinkability, one is more than enough for me. What I like the most about this beer is the appearance and aroma, to me those are the highlights of this beer. What I like the least about this beer is the taste and drinkability, they need a good amount of work. I don't think I would buy this beer again and I can't say I would recommend it. All in all This beer was just ok and I can't say that it was that memorable, it was pretty close to being just another average Marzen. It's one of my least favorite beers from Revolution and it's pretty close to being an average example of the style. Better luck next time guys, this one could use a good amount of work.

12oz can poured into a tulip glass.

(A)- Pours a clear caramel colored amber-orange color. Produced some good off-white froth that stuck around for awhile before dissipating. Minimal lacing.

(S)- A nicely dry yet bread-like graininess meets the most subtle background sweetness in recent memory for an oktoberfest. Ever so tiny hint at a grassy hop-like aroma. The grainy yeast seems to be the predominant aroma.

(T)- I really dig the rustic nuttiness this has up front that is quickly followed by the great graininess and very subtle sweetness from the aroma. A great yeast component in the middle that really blends this beers whole profile together to make a really cohesive beer for the style. This succeeds where alot of oktoberfests fail; it is not overly sweet.

(M)- A great carbonation level. For an oktoberfest, this is quite smooth despite an ever present bready graininess. A mild sweetness balances well with the rustic nutty flavor this possesses. A superb balance for a style I have alot of love/hate experiences with.

(O)- I have not had many new Marzens this season so far, but I think this one really is a fantastic example of the style for me. Smooth, yet a good malt bill meets a nice rustic nutty graininess. Really digging alot of what Revolution is putting out and this is no different.

Taste: Thick bread, sweet caramel, slight hints of toffee, white and black pepper, vague suggestions of earth and wood oils. A bit of a floral tinge at the finish.

Overall: I enjoyed this marzen. I would drink it again.

Nice head, but more of an amber rather than traditional red (personally for this kind of beer, I prefer traditional). Aroma is caramel malt and hints of toast and hops. Flavor's similar to nose, on sweet side, good carbonation. Body's a bit thin. Good enough finish. An ok Okfest.

Aroma is malty and clean, with possibly some sweet fruity characters lying somewhere underneath.

Very good tasting oktoberfest. Caramel malts lead the flavor profile of a beer that is large and complex for its style. There are some fruity notes here and there, an herbal taste from the hops, and an overall sweetness interlaced throughout the flavors.

Wonderful crisp mouthfeel on a medium-bodied beer. This is the best oktoberfest I've had this year, and very likely the best I've ever had.

A supremely underrated beer of its style. Thanks Revolution!

Poured into a large mug, the foam froths up, soapy bubbles rising towards the rim of the glass. Three fingers of foam and soapy lacing in the glass. Bright saturated orange amber color.

Slight citrus flashes by, and the bready toasted malt base rolls through and lingers into the aftertaste. Toast, marmalade, lightly bitter noble hops in the aftertaste. Light to medium feel, easily drinkable. May not be the most traditional, but it tastes great.

12oz can poured into a pint glass. Pours a hazy copper; white head that fades and leaves nice retention. The aromas are full of breads and grains. It's pretty malty with hints of cocoa and caramel. Smells nice, but it's pretty subtle. The flavors seem to really match up with the aromas. Very grainy. Lots of caramel and butterscotch. Nice flavors, but they don't quite pop. Mouthfeel is very nice; medium-bodied; thick, fluffy and creamy; moderate carbonation. Alcohol goes unnoticed and it's easy to drink.

This is a solid Oktoberfest. It's not bad, but it seems to get lost in the shuffle and almost seems forgettable compared to the other ones on the market, in my opinion.

A - Brownish copper beer with a white head that that leaves some spots on the sides of the glass.

T - A little bit lighter than I was expecting on the taste, but it's appropriately malty with caramel and some toffee taking the forefront. Finish makes me think a little of fructose corn syrup for some reason. Easy to drink.

O - Drinkable, decent for the style. Can drink again with no complaints.

APPEARANCE: Copper in color with a slightly off-white head that foams up to about an inch, this lively looking beer plays its part as a gorgeous American-style Oktoberfest.

SMELL: The smell is not very intense, but it is pleasant with biscuit notes and an ever so slight roast on the caramel malt aromas.

TASTE: The caramel comes through very strong, making this a sweet, delightful treat. That said, a nice bready flavor finishes the beer off while a variety of fruit flavors dance around the whole beer.

MOUTHFEEL: Medium bodied and very well balanced overall. Sweet to start with the perfect amount of drying towards the end. A very light tickle gives the beer an approachable character with a clean finish.

OVERALL: As always, great example of the style from Revolution.