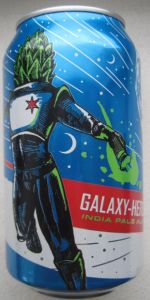 Notes: Brewed for the Chicago Comic and Entertainment Expo, this IPA shoots a raygun blast of Galaxy and Zythos hops into your mouth and leaves a crisp, dry finish. This IPA has big hop flavors and aromas of tropical fruit and citrus.

Hazy light orange body with plenty of eager streams rising, the dense light tan head fades to a veneer but leaves plenty of lines of lace. The nose is pretty straightforward IPA- orange rind, grapefruit, perhaps some lighter elements like passionfruit, plus a hearty malt base. The taste gets more tropical, introducing pineapple and mango, but only as nuances to the main orange-grapefruit track. The malt is also unfortunately prominent, coming in as bread crust. With the fruity, tropical hops being the main draw here, heavy malt is a derailment from the fun. The body is good yah yah w/e.
Dare I say... not the best in Rev's Hero lineup. Came across as an almost typical, bad-mashup (orange and bread crust). Am I missing something?

Notes via stream of consciousness: Galaxy-Hero? I can only assume that this is brewed with Galaxy hops, and I'm hoping 100% but I'd understand if it wasn't. It's poured a somewhat hazy golden body, hopefully from dry-hopping, with an orange sheen beneath a rocky head of off-white foam. The aroma expresses hop resins, bready and caramelish malt, and mild tropical fruits. A little more aroma would be nice but I can live with it. On to the flavor... the malt is much richer and fuller than I thought it would be, although the aroma did indicate that, and the hops remain fairly mild given that it's a single hop beer, or close to it. There's some orange to it, a hint of pineapple, some peach, a touch of grapefruit, and some pine as well. It's also earthy, grassy, and a little bit floral, particularly in the lingering, mainly dry finish. There's a lot of malt there, and it takes a few seconds to fade. But there's also a pretty solid bitterness there as well, and although you don't get that so much in the first few sips because of all the sweetish, bready, and even lightly toasty malt it becomes more apparent a little further in. It's medium bodied with a dextrinous feel, and gently crisp with a fine-bubbled carbonation. As far as being a showcase for the profile of Galaxy hops it's not the best I've seen, but it's still a really nice, enjoyable, malty and hoppy, bitter IPA. The alcohol never shows, and I feel like it seems a little like a double IPA with lots of malt that helps to cover it up. I could drink a few of these, maybe up to 4 in a row - that's good drinkability! Looking back the head has held really well. It's dropped but it still maintains about a 75% solid surface covering, and the lacing was thin but nice, covering about 25% of the surface of the glass. I'll have to look for this again. Recommended!
Review# 6,125

Finally reviewing the last can brought back to Phoenix.

Beer poured orange with a beautiful white head that has some serious hang time.

Taste is gooseberry forward with some grapefruit over a nice malt base. Finish is citrus rind with a strong amount of bitterness to let you know this is an IPA.

Mouthfeel is medium bodied and refreshing.

Overall a pretty good IPA that is worth trying if you encounter this while in the greater Chicago area.

Picked up a sixer of cans from The Keg, New Albany IN. Poured into a tulip glass.

O: This is a very, very good AIPA, bordering on excellent. Aromatics could be a little better. Can art lives up to an awesome beer, always a small plus.

A. Golden copper color with a hint of light orange. Thin off-white Head

T: ripe mango, strawberry, grapefruit, and some grassy hops. Some bready malts in the back. A touch of bitterness to finish. Good stuff

O: good stuff. Smooth and fruity/juicy IPA with a touch of bitterness to balance it out

Galaxy-Hero from Revolution Brewing
Beer rating: 92 out of 100 with 854 ratings