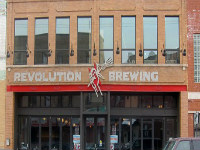 Rated by chillin from Indiana

4.24/5  rDev -2.8%
vibe: 4.25 | quality: 4 | service: 4.25 | selection: 4.5 | food: 4.25
Our group went here to have the Sunday brunch and to try their beers. The pub is located along a busy neighborhood street in a storefront setting among other retail businesses. Street parking is the only choice, and you have to be lucky to find something anywhere close by. The place was very busy, but we arrived at the right time to get the only available table. A custom-carved, wooden bar sits to one side and has seating all around it, and the dining area is the other half of this space. Some tables are in the window space off to one side. It looks like a banquet room is located on the second floor, or perhaps is used for overflow crowds. Our server was right on us, but never gave us the feeling that we need to hurry our visit. The vibe of this place is what I expect a brewpub to be.

4/5  rDev -8.3%
vibe: 4 | quality: 4 | service: 3.75 | selection: 4.25
This is like a blend between a classic Cheers bar and a casual restaurant. The food and beer menus both are pretty expansive, and even the take home brews remain pretty formidable and otherwise somewhat rare if you're not from the area.

Reviewed by slee196 from Illinois

Reviewed by Vidblain from Minnesota

4.65/5  rDev +6.7%
vibe: 4 | quality: 4.75 | service: 4.75 | selection: 4.75 | food: 4.5
I'm a little surprised by how large the Brew Pub space is - quite a few tables, a very long bar area, and possibly an upstairs as well? I didn't explore much - Revolution was my first stop in to Chicago this weekend, so the bathroom and a beer were my first priorities. The food menu impressed me though - we ordered a giant pretzel, cheese curds, and brussel sprouts (call it preparation - I knew I was going to be drinking and eating like shit for a few days straight). Every item of food was well done and tasty. The beers (Freedom of Press, Boss Ryeway, a Keller Pils, and Batch 2000) were all well done, though the only one that really blew me away was Boss Ryeway.