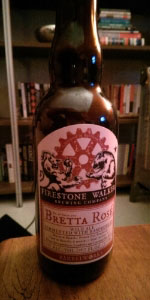 Notes: Thirty miles north of Barrelworks lies the fertile Santa Maria Valley. Its warm days and cool marine layer-fed evenings allow for a cornucopia of fruits and vegetables to be grown in its rich soil. One of Santa Maria’s crown jewels is locally grown raspberries. We jumped at the opportunity to ferment fresh local raspberries with one of our Barrelworks creations. Behold Bretta Rosé! A low-alcohol Berliner Weisse style ale, acidified and matured in French oak puncheons for 6 months, is the foundation for this gem. Add 1000 lbs. of fresh raspberries, allow a secondary wild fermentation for 4 more months and voila (!), we have a crisp effervescent concoction, bursting with raspberry perfume and flavor, a rosé color, bracing acidity, and a clean and refreshing finish.
View: More Beers
Recent ratings and reviews. | Log in to view more ratings + sorting options.
4.5 by DOCRW from Washington on Jun 09, 2022
4.09 by TMoney2591 from Illinois on Dec 01, 2021
4.18 by drstalker from Illinois on Aug 24, 2021
4.03 by robotic_being from Florida on May 18, 2021
3.99 by DudeBeerYaBro from California on Jun 17, 2020

Poured from a cork'n'cage bottle into a Dogfish Head tulip. Bach #4.

L: Nearly clear golden rose pour... cloudy at the end with some sediment. A finger of fizzy white head leaves a modest ring of lacing.

S: Tart raspberry and jam. Fruit/berry... a bit of funk and lemon.

O: An outstanding oaked Berliner-Weisse. The raspberry is phenomenal, and this one was a real treat.

This beer poured an attractive Rosé pink/orangish amber. It had a white colored finger thick head which had very little retention to it. When the head subsided, which took no time at all, it left a white lacing around my cup. I'm not sure if it was the age that caused the lack of head or some other reason, but I wish that there was a larger presence of a head as I'm comparing this to other Berliners that I've had.

On the nose, I was presented with a lot of fruity esters upfront ranging from apples to pears, kinda giving me an apple cider kind of vibe to it. I also found there to be a good presence of tartness coming from aromas of raspberries. The presence of sour acetic acid from notes of cranberries only appeared for me in the back-end. I found that the tartness coupled with the sourness made the aroma on this beer an overall balanced experience.

The taste on the other hand was very acetic forward as expected. With sour notes of cranberries and raspberries upfront, I also definitely picked up on some bellow oak characters along with these sour flavors. In the middle was where I found some tartness from the raspberry. So in a sense, the roles of the sourness and tartness that played in the aroma and taste were reversed. The beer finished with a malted wheat taste coupled with a bit of sourness and tartness that I got from the beginning and middle.

The feel of this was medium bodied and had a high carbonation to it. This made it feel like I was drinking cider--which coupled with the low ABV and absolutely no alcohol taste--made this super drink-able and enjoyable for sour lovers everywhere.

I would definitely drink this beer again. I feel like the price tag is worth it for the quality you're getting for this Berliner. I just wish that there was a larger presence of a head along with a more balanced taste of the oak, wheat, tartness, and sourness rather than the overwhelmingly large sour taste that I got in the front.

S: Raspberry is prominent, impressions of lemony tartness and lacto sourness, hints of a sweetness from the oak I’m guessing with a flash of vanilla.

T: Lemony raspberry sourness isn’t quite bracing in its sourness but it is upfront and prominent here as well; rolls over the tongue quickly and leads to a fairly quick finish that isn’t drying or bitter. Again, a vanilla-like sweetness pokes through but is entirely an afterthought. The lacto character and the raspberry notes underneath carry the palate.

Tasted from bottle. Pours a hazy red with bright white head. Aroma is raspberry and a little sour funk but not much. Taste is big time sour tart. Flavors of raspberry, strawberry, brett funky. Nice flavor but a little too much tartness for me.

This comes from a 375ml bottle, with a bottling date of '02/13/17'.
Body color is a reddish medium amber. One finger of off white head. After a couple of minutes what is left is an interrupted island and a bubble fed ring. Leaves behind strings of lacing.
Aroma is tart lemon and raspberry. The oak barrel sits underneath, along with a touch of funk.
Taste is tart, and close to sour. Lots of raspberry, which is semi-sweet, but still tart. There is the light flavor of the oak barrel. Some yeast funk but not of a strong flavor addition.
Medium mouth feel, with some fizziness on the tongue. Very good carbonation. The ending is toward the dry side.
This is a beer that progresses from super raspberry semi-sweetness and then transitions to the drier and earthier oak and yeast. The tartness is there throughout. Very tasty to drink and is a real burb inducer.

Pours a slightly cloudy pink with orange hues, a one finger white head that settles quickly to an everlasting cap that leaves no lacing. Smells of tart raspberries with some Brett funk and a hint of wheat. Tastes of crisp sour raspberries, Brett funk, strawberries, and wheat on the finish. Very tart yet somehow refreshing. Light to medium bodied, lively carbonation, very dry finish.

L - hazy pink with orange hues around the edges with a medium white head that dissipates quickly
S - Crisp raspberries, brett funk, earthy notes and some hints of strawberries.
T - Follows the nose with crisp raspberries up front followed closely behind with notes of brett funk, and some hints of strawberries and earthy notes.
F - light to medium bodied with a moderate to heavy amount of carbonation. Crisp.
O - I typically can take or leave this style of beer, but this one is hands down one of the best I've had. Such a great surprise and well worth trying and definitely one I'd revisit.

Way too tart for me.

A: Poured into a tulip glass to a pinkish orange topped by a dense two finger white head which fades slowly to a collar around the edge of the glass with minimal lacing
S: Smells of huge juicy raspberries with a little sourness.
T: Taste is some nice sourness with a lot of juicy raspberries along with a slight creamy wheat flavor. Swallow is a little more wheat and some lingering sourness with some remaining notes of raspberries.
M: The beer has a moderate amount of body. Carbonation is effervescent but not prickly while the beer has a drying finish due to the acidity.
O: Overall this one is fantastic. Really nice raspberry flavors with a real nice sourness along with the rest of the notes that I'd expect from a quality berliner. This id definitely one to try if you can find it and like the style.

June 20th, 2015 - The Bretta Rose is a nice gem in Toronado's menu, a beautiful pomegranate and ember color. The aroma is bright and springy with some sweet watermelon, fresh raspberry, cotton candy, and deep cherry scents, like a fancy, cherry jubilee. The flavor is much more sour, beginning with a sample of pomegranate, and blossoms, ramping up in acidity on a linear scale. But even at its peak, the sourness is brilliantly balanced, with a nice acidic burn all the way through. Layers of watermelon and sour barrel come in with some white wine vinegar and what seems like chardonnay. The taste is bright and one sip goes a long way, though the aftertaste is relatively short.

Tart raspberries with a touch of woody/musty yeast.

Taste very much like the aroma, only way more tart.

Acidic with crisp-hot carbonation. Astringent and drying with light, sticky syrup from the raspberries.

Generally, I'm not a fan of really tart beers, but this is very well balanced. A great summer beer.

Golden hue with a tinge of hushed violet, champagne carbonation, whisp of a head. Aroma is delicate & cajoling - raspberry, elderberry, lingonberry, traces of oak & tannin, light funk. Taste really brings the raspberry, but it is balanced by a wonderfully crisp, tart foundation that frames the fruit note & keep it from being too much. The sour notes are bouncy, don’t bully the other flavors, but gives a nice kiss of that horse saddle / farm house / whatever you wanna call it lactic note. It spins back for a fruity finish, light and clean. Excellent balance and harmony, overall fantastic wild ale