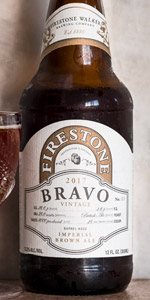 Notes: Imperial Brown Ale - This beer is then aged for up to a year in used Heaven Hill bourbon barrels.
View: Beers
Reviews: 171 | Ratings: 545 | Log in to view all ratings and sort
Reviews by Keepnitrl:

12oz bottle. Pours a dark brownish copper color with no head. Some lacing. Boozey, woody aroma. Oak, vanilla, caramel, toffee, brown sugar, and molasses. The taste is Bourbon with brown sugar, molasses, wood, and earth. Caramel and brown sugar finish with more Bourbon. A big sweet with a big alcohol presence. Light floral hops notes. Lightly carbonated. Anything that comes in a box by Firestone Walker is worth buying and this is no exception.

Look is reddish brown, little paler than. Normal brown ales.
Smell is so nice, hints of caramel, vanilla, and a great burn of bourbon.
Taste is smooth with the nice hint of bourbon, with a good burn.
Feel is smooth and warm.
Overall very good. I’d definitely have again.

A: Very little head light khaki in color settles to a film. Body is a slightly murky caramel with some floaties suspended in it.

M: A little thin some nice alcohol slickness and a light cling.

On tap at The Stone Brewing Bistro & World Gardens on 11/13/09 during their Firestone Walker 13th on the 13th event. Served in a snifter.

Pours a deep, somewhat clear, dark brown (just a wee bit of light is peeping through) with a thin covering of off-white foam. There is more of lightish look to the retention and lacing but the flare-up has a nice moderate look to it. Bourbon really comes out boldly here in the aroma, with some deep notes of burnt molasses. Fortunately, I'm also getting a get bit of the brandy too, as it gives off more of a dry and fruity feel. The Brown Ale is under there somewhere (with roast and caramel coming out the most) but the barrel blend seems to add most of the deep sweetness to this. Earthy tannic wood and some vanilla add a slickness to the nose.

The taste is pretty similar to the aroma, with burnt maple syrup and char mixing in with a flush of fruity cherries. Notes of vanilla and oak weave mingle in, giving this smoothness. This is just so sweet and sticky, with the flavor moving effortlessly in and out of each other. The finish matches this, being warm, syrupy, and sugary on the lips. The mouthfeel is full bodied; with a bit of a heavier prickly carbonation up front, giving way to a slick and more viscous feel underneath. This definitely wears it's ABV on thee ole sleeve, having an assertive beef to it, but luckily that anticipated alcohol sting never comes. Really steady sipper here for the size.

I'd really like to see more of these bourbon and brandy blends done, as I love how each brought a different type of deep sweetness to the profile, yet they still played off each other brilliantly. Really tremendous stuff here that was definitely up there as one of my favorites from a pretty outrageous night of Firestone Walker beers.

Served in a snifter at the Blue Palms Brewhouse in Los Angeles for seven dollars, this beer is not retired, reviewed 11/14/08 from notes, it is an imperial brown ale and not a stout, it has sherry notes and not bourbon, and it is amazing

A-Deep dark brown with not much light shining through, though there is some red around the edges, miniscule 1/8 inch beige head that settles extremely quickly, minimal retention, no lacing
S-Sherry, hints of whiskey, grains, butterscotch, brown sugar, milk chocolate roasted nuts, dark charred malts, mild coffee, vanilla, oak, butter, cream, and tons of booze
T-Tastes starts off with lots of sherry and other mixed booze flavors, sugar and nuts made up the middle and provided some great texture, finish had more hard alcohol mixed with a great vanilla taste, this was served a little cold at first, once it really warmed there was a nice buttery cream taste in the middle that joined the malts, other breweries need to take a hint from Firestone and start using sherry more often, there is a bit of a port wine feel by the end but there is a nice brown sugar flavor, some cocoa that is fairly soft joined the mix and this was enjoyable to say the least
M-Hot with booze, sticky, spicy, and malty mouthfeel, medium bodied that was a little on the thinner side, nice low to moderate level of carbonation, taste lingers nicely with a bite
D-Alcohol is right up front and not hidden well at all but somehow this goes down with ease, light on the stomach for what it is, could have a few more glasses for sure, so so smooth

Being that it is the base beer of Firestone 11, I expected good things and I got great instead, this is better than the blend by itself in my opinion, if this stuff is bottled along with Parabola, the hype machine will be in full force, mark my words, such a great balance of barrel characteristics and a full body, would love to drink again, highly recommended

12oz bottle (2017 vintage), in a brown cardboard sleeve - another dear offering up here, but that's what special occasions are for, I guess.

This beer pours a mostly clear, dark red-brick amber colour, with one skinny-ass finger of weakly puffy, loosely foamy, and mostly just bubbly tan head, which leaves a few instances of not long for this world ice floe lace around the glass as it quickly melts away.

The carbonation is fairly laid-back in its barely-there frothiness, the body a solid medium-heavy weight, and sort of smooth, as that Bourbon booziness has a thing or two to say right about now. It finishes on the sweet side, the alcohol, malt, and vanilla/chocolate really carrying the lingering day.

Overall, this is certainly a complex big-boy offering, with the barrel character glad-handing at best, and obtrusive at worst. While I appreciate the chance to try this one, when I can get a mid-shelf bottle of actual Bourbon for the same price, it begs the question - why would I? Oh, yeah. Beer.

Golden color, thick pour and sweet nose. Reminds me more of a quad than a brown but that's just nitpicking. Overall, I thoroughly enjoyed this barrel aged offering.

Overall
That's a fine Brown Ale! The 13.2% abv is hidden extremely well in this smooth and decadent Imperial Brown Ale.

In some ways, this is beer is all about the barrel - huge bourbon notes, bits of vanilla and molasses, touches of booze but impressively restrained for something north of 13% ABV. That said, if you look for it, you can find the brown ale beneath, slight hop character, sweet/chocolate malt too. Really cool stuff that manages to be extreme without being one-dimensional.

(Postscript: a giant kiss off to the whiny mouthbreathers who, somehow, are mad at Firestone for putting beers like this into 12oz bottles. This was a breeze to get, they are still available on shelves, 12oz is a perfect serving size, and I wasn't forced to drop $18 on a bomber I'll only drink half of because I had to share it with someone else because who the fuck drinks bombers of 13% beer alone? Oh, but price per ounce, blah, blah, blah! It's called opportunity cost, you selfish dicks. Sure, I paid an extra $1+ in price per ounce, BUT I STILL ONLY PAID $10. I HAD MORE MONEY IN MY WALLET AND USED IT FOR MORE BEER. What the hell is the issue here? No one can ever be happy, there's always something to complain about. Pound sand, you worthless sacks.)