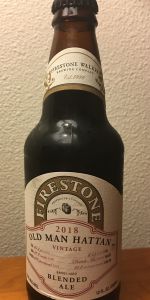 Continuing the tradition of our Black Friday “cocktail” releases, we give you Old Man Hattan, a barrel-aged mashup of two classic drinks: the Old Fashioned & the Manhattan!

The base beer is a blend of Velvet Merkin, Bravo & Stickee Monkee aged in whiskey barrels. The twist comes from select lots of Parabola & Helldorado that were aged in Woodford Reserve barrels previously used to mature cherry bitters, orange bitters & aromatic bitters.

View: Beers
Reviews: 35 | Ratings: 107 | Log in to view all ratings and sort
Reviews by bubseymour:

On tap in Sacramento CA - pours a murky dark brown/almost black with frothy khaki head leaving a lot of lacing. Nose is similar to a whiskey manhattan but with more wood. Taste follows, I like this . Finish is a bit thin. An interesting blend.

Had this side by side the 22nd anniversary and, for me, this was th winner. Lots of cherry. Easy to drink. Winner!

Look: The beer pours opaque, a little murky, dark brown. At the narrower top of the glass the beer is translucent with shades of light brown and ruby. A minimal amount of khaki colored head that creates a thin layer of foam on top of the beer. Some visible carbonation. No lacing.

Taste: Up front you get some whisky sweetness and warmth. Some sweet, dark dried fruit including dates / figs and some sweet, dark bread. The beer is dryer than both cocktails. I think the barrels that held orange and cherry bitters comes through a lot. Again, sweet candied orange and sweet cherry. Some rye like spice again.

Feel: Medium level of prickly carbonation. A semi-sweet beer with some hints of bitterness and wood. A lingering warmth and sticky sweetness on my lips.

Overall: I am really enjoying this cocktail inspired beer. As a lover of both drinks, this beer is a success for me.

Taste: The taste profile features the spicy notes, mild bourbon and a touch of brown sugar just as the nose suggested. I also get some mild oak woodiness. The beer taste profile has the bitters featuring prominently.

Mouth-feel: On the light side of medium bodied with a medium level of carbonation.

Overall: A different beer that has a unique taste profile. I'm not too big of fan of spices in my beer but I can deal with this one.

Wow! It actually tastes like a Manhattan. Works great with base beers. Cherries and oranges really come through. Fantastic

Taste takes a different turn. More strange than the nose to be sure. It hints at being a barrel aged stout, but it's too light in flavor for that description. It's brighter than a stout. Fruit bringing it to a higher note. Sweeter than one too.

Feel is smooth with very fine bubbles bringing the slightest bit of edge.

Never had a Manhattan as a drink so I can't attest to the authenticity of this mix in comparison to one. But as for a stand alone brew this is certainly one of the more distinct and interesting beers I've ever had. Firestone Walkers Barrel aged stuff is always a treat and this is no different.

Fairly sweet and fruity smell. I can detect some booze and vanilla and chocolate.

Tastes a lot like it smells, pretty sweet up front, although not overly so. Hints of spice and vanilla and some fruit. Has a bit of a lingering bitterness at the finish.

I thought the feel was pretty nice, little thick, and can feel the carbonation.

Not a bad beer, although I have to admit to not having tried either of the drinks this is based on, so I am judging it purely on the merits of the beer itself. It does almost taste more like a mixed drink than a beer, with the addition of carbonation. While this won't become my favorite beer from FW, I like the fact they are trying new things, and I am getting a chance to try unique beers.

Bottle from Bert's
Dark brown in color with a thin off white head that dissipates rather quickly. Initially some lactic on the nose. Bits of cherry and spice with a nice vanilla oakiness. Sweet fruity almost pumpkin spice flavor. Light toffee and caramel more cherry and hints of bourbon. Lots of flavors but seem like they need a little time to meld imho.

12oz bottle. Poured out a dark, dark brown color with a small, off-white head of foam. It smelled of cherry, orange and maltiness. Bitter with orange, cherry, toffee and sweet caramel.

Served in a teku glass from the bottle.

Appearance: Deep mahogany color with an off white head coming off slightly orange tinted initally rising roughly half an inch.

Smell: toffee aroma which comes off a bit light.

Mouth: Deep maple syrup finish with a very full body and deep berry feel. Sticks with you for a while especially after the beer warms up.

Overall: Good beer, part wine and part beer...slight butterscotch feel but you'll get over it. You will list trust me, Salud!