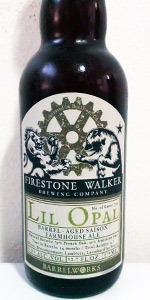 At five years I didn’t know whether to expect a ticking geyser or a dormant bear. Upon opening, it’s definitely more of the latter. Thin foaming atop a tan-gold orange tinged beverage. Low carbonation. Light aroma, with some funky notes—bloomy cheese—and hints of peach. The souring dominates the sip.

A pleasing blend if honey & mildly tart strawberry-perfect for quaffing in the summer months.

A: Poured into a delerium tulip to a pale golden yellow topped by a finger of dense white head which fades quickly to a collar around the edge of the glass with minimal lacing.
S: Smells of orchard fruits and lemony tartness along with a slight oak, funk, and grassy note.
T: Taste is pretty tart lemon on entry with some funk, slight chalk and some slight hay notes. Strong pucker throughout the drink. Swallow is orchard fruits and grassy notes with a little lingering lemony tartness. Really surprising how quickly the tartness washes away on the finish.
M: This beer is on the lighter side of things and is flirting with being watery. Carbonation is effervescent and slightly prickly while the beer has a drying finish.
O: Overall this is a very impressive beer. It has good flavors and some nice complexity which make it an interesting drink. Definitely more tart on the taste than the nose led on but that isn't a bad thing. Definitely happy that I picked this up and I hope to see them attempt to recreate it.

A- pours a clear golden color with a two-finger creamy white head that has great retention after the pour, leaving a bit of lacing behind

S- fruity and peppery yeast aroma up front, with notes of apple, pear & stone fruit. Spicy oak adds a nice woody element & a hint of vanilla. Brett notes close it out with some earthy barnyard aromas

T- light and fruity up front with flavors of ripe pear, green apple skin and apricot. Mid-palate brings out peppery & spicy oak, which includes highlights of vanilla & oak. The finish brings out the brett earthiness with notes of dried hay and earth. Just a hint of tartness on the finish leaves you wanting more

O- a solid saison that has just enough tartness to keep it light and refreshing, giving it high drinkability

Great balance of brightness, funk, and barrel. Somehow both refreshing and subtly oakey at the same time. Less sour than many beers highlighting bruxellensis on the bottle and I think a better beer for that. Would try again.

Pale gold and nearly crystal clear in appearance. The body was capped by a tight, frothy, finger-tall, bright white crown that dropped to a barely-there film. Minimal streaky lacing stuck along the glass.

The aroma was fantastic. Really crisp and bright with big, tart lemon notes. Fairly wheaty. There was a dry, powdery yeastiness that subsided as head receded. Good amount of Brett and funk as well. Touch of grassy hops. Some oakiness was also noticeable. Overall, surprisingly complex and very well balanced.

The flavor profile was similar to the nose but perhaps even punchier. Super bright and lemony. Quite sour, but the sourness was nicely offset by a crackery malt base and a subtle candy-like sweetness. This reminded me somewhat of Lemonheads. Big dry, oaky notes appeared as the beer moved along the palate. The beer finished with an intense, tart lemony kick and some lingering oaky tannins.

Lil’ Opal is an outstanding saison/wild ale hybrid from one of my favorite domestic sour beer producers. The fact that this rested in American oak barrels for seventeen months prior to bottling is pretty insane and definitely reflected in the beer. I love that nearly all the beers in Firestone Walker’s barrel program are super oaky and complex but not overly tart or acidic. That said, they are also surprisingly affordable.

Golden amber with some carbonation, and 3 fingers of fluffy off white head.

Smells of Brett, sour funk, vinegar, lemons, overall very much like a lambic.

Medium body, with medium to low carbonation. Quite dry and slightly puckering.

Got this tonight in Syracuse, NY, where I am drinking it at a hotel. New Years Eve in a New York State hotel, this is Dec 31st, 2017. Excellent wild and funky brew, more of a wild beer than a saison in my opinion, but and excellent brew regardless.

Light dusting of loose bright white foam across the surface, not longlasting, as you’d expect not much lacing either. Bright amber orange hued liquid, clean with a very healthy amount of widely dispersed bubbles. The nose displays the oak right away but it is crisp and not particularly dominant, lots of space left for yeasty notes, green apple to pear fruit scents, something like coriander spice, tangerine to lemon citrus, finishes with some unprocessed grains. In the mouth it’s lighter bodied and just as clean and crisp here, the oak keeping it as angular as adding amplitude. Lavender, tangerine citrus, more peppery here but still has a savory herb edge as well. Here you get some pineapple to mango along with apricot, pear fruit but overall it’s so dry that it is difficult to call the fruit tropical. Floral finish without much funkiness. Borderline demure in character, about as food friendly as you can get with the oak barrel treatment.

A: The beer is crystal clear dark golden yellow in color and has a slight amount of visible carbonation. It poured with a short white head that quickly settled down, leaving a narrow collar around the edge of the glass.
S: Light to medium aromas of toasted oak are present in the nose along with faint hints of Brett.
T: The taste is mostly dominated by the toasted oak and associated hints of vanilla. There are also hints of Belgian yeast and Brett.
M: It feels light- to medium-bodied and slightly tart on the palate with a moderate amount of carbonation. There is a bit of dryness.
O: I found the oak barrel aging in this beer to be rather interesting as it helped to balance out the yeasty flavors and normally dominate a saison.

On tap at Firestone Walker The Propagator, Venice. A 3oz taster pour into a mini snifter.

Appearance: A mostly clear golden colour with a two finger white head that had good retention and left nice lacing.

Taste: Taste is similar to the aroma with tart, tangy, citrus and tropical fruit and a hint of funk.

From bottle at home. Very pricey. Not big on sours in general but a big Firestone-Walker fan, so I figured I'd take a leap. Hazy & golden. Dishwater head. Big fizz on the tongue. Lots of sour but little fruit. Tang is the word that feels right. Lemony comes in second, but none of the above take the reins.

Gauging with my proclivity for bigger, bolder stouts & barrel aged ales, this, although interesting, is on my one & done list. Been there...but still not sure why 'there' is even on the map.

As it warms the whole experience rounded out. The taste centers shifted farther back on the tongue. Became bigger, fuller. The sharp of the tang matured to one closer to a cheese tang. Sharp, but not acidic.