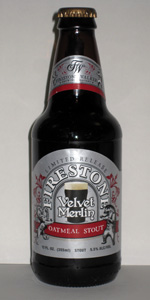 Notes: A decadent oatmeal stout. Velvet Merlin offers robust cocoa and espresso aromas with subtle American hop nuances. Rich dark chocolate and roasted coffee flavor with a creamy mouth feel and wonderfully dry finish create the perfect balance in this full-bodied stout. Ideal for sipping in the winter months or at the end of a meal.

Original name was "Velvet Merkin", but name was changed when it began to be bottled in 2010.

Now in cans. As fine a 5.5% velvety, flavorful Stout as can be found. Must blind test against Lefthand and the rest.
a) Massive lace over black body.
s/t) Enough roast to temper the sweet of chocolate, mocha, vanilla, prune. Some grass and hops also balance.
f) Velvet to core as good as any.

An easy to drink, flavorful fall treat. I'd have another.

(nitro-tap)
A: pours dark body with reddish hues and a thick ear with good retention and lacing
S: subtle smelling beer, but not much to it
T: somewhat roasted toffee notes, but very light. Some roasted notes with a subtle, creamy, oaty aftertaste
M: medium bodied and pretty creamy; not too bad
O: ok mouthfeel and taste combo; ok overall, but nothing impressive.

L: Very dark brown color, no head, not much of lacing either, light carbonation.

Taste: Smooth with a bitter coffee and roasty cocoa flavor all over. Solid and no problem getting this down.

Cola black color, medium light carbonation, slight creamy feel. Aroma is chocolate, cocoa, bourbon candy, coffee and brown sugar. The taste is sweet but not overdone and it makes it taste like a bourbon beer candy. It's incredibly smooth and flavorful and the different flavors blend togethor really well

Very subtle roast coffee aroma, if any. I absolutely do not get the 'robust' from the notes until the aftertaste.

Mouthfeel is perfect for an oatmeal stout. Creamy but not thick.

Overall a great example of the style and par for the course as FW goes.

This was poured into a pint glass. The appearance was a nice dark brown close to black color with a thin semi-annual head that dissipated within about a good thirty seconds. Light lacing traced around the glass. The smell had a dark chocolate overcoating a deep dark grain (oatmeal I’m suspecting). The taste was mainly roasty sweet chocolate with a delicate yet sharp bitter coffee to balance. Light chocolate aftertaste amplifies a dry silky finish. On the palate, this one sat about a medium on the body with a decent sessionability about it. The carbonation seemed to be appropriate for the style and it was good to me. Overall, this was a wonderful oatmeal stout by Firestone Walker.

Let me tell you a tale. Yes a tale of the Velvet Merlin. Four years ago when I was a wee lad (yes slightly underage). I stumbled across a frightened and alone sixer in our village Albertsons of Irvine. I kindfully took this young sixer under my wing and soon after my elder acquaintances bartered with the cashier. Once full ownership was established we scurried back to the nest and po'd up into ice cold frozen pints. Popping the top was like removing the sword from the stone and everything that followed was nothing but royalty.

The medium pour left me with a perfectly decapitated tan head of roughly an inch.

Ahhhh the aromatherapy of chocolate, coffee, and overall crispness really woke the senses.

And the taste! Yes the taste! It was like our home became a tent next to the fire and my balls finally dropped.

But the feel! Yes the feel was smooth yet exquisitely balanced with carbonation!

But alas, the young sixer was no more after withstanding a whole day. And the local Albertsons had no more to replenish my newfound obsession.
Four winters past and I have told the tale of the legendary sixer a thousand some odd times, but never remembered the true name nor brewery. The beer was nothing but a myth.

UNTIL! I stumbled into a Bevmo half dead and ready to give up the grueling internal battle of even believing such a beer ever existed... I had found her.

Once again a lone, frightened little sixer just as I remembered. As soon as I purchased her, the tag was removed from the fridge and no more remained in its place. I had a frozen glass ready for me at home and I indulged. I was scared I would be dissatisfied and disappointed... but It was everything I ever thought it was. The perfect beer. And so I made this account and wrote this here tale. The tale of the Velvet Merlin.

In all seriousness this is a great beer. Buy it if you see it. But if I see you buying it, I will challenge you to a duel for it.

Super dark brown. Thin, creamy head.
Very little aroma, but hints of malt, char, and metal.
Tastes dark, roasty, and a little charred. Some bitterness at the end. A little woody. Not super robust or complex, but still quite good.
The smoothness is the star. Great level of smoothness from the oats. Not too heavy.

I find revisionist history to be laughable & here is a stark example: "Original name was 'Velvet Merkin', but name was changed when it began to be bottled in 2010." Ha ha, horses**t! They thought that they were being clever/funny until the ATF did their homework & realized that it referred to a (ahem!) carpet used by (ahem, again!) prostitutes during the Middle Ages. You may have heard the sobriquet "Beaver" applied to Venus' Triangle? Some high-end merkins were fashioned from beaver pelts. Why was this important? We, as humans, had no understanding of vermin vs. vectors during the Plague Era, but a connection was made between fur & body hair (sort of correctly, think crabs) & so clean-shaven was the order of the day. For the hirsute-aficionados, the merkin was created to satiate their desires. Once the ATF realized what they had approved, they spanked Firestone Walker's collective pee-pee & made them make an amendment.

Onwards! I Pop!ped the cap to great applause, forcing me to stop & take a bow before continuing. How bow dah? Cash me owside. It was a nice, fresh bottle, so there was nothing standing between me an a heavy-handed pour except fear itself. I decided to shoot the works & go for the gusto, pouring nearly the entire contents into my glass before a pseudo-cascade took ahold & I had to back off lest I clean up a mess later. It settled into two-pus fingers of dense, rocky, deep-tan/light-brown head with great retention. Color was Very Dark Brown to Black/Opaque (SRM = > 34, < 44) with garnet highlights & NE-quality clarity. Nose smelled of milk chocolate and a fresh-baked breadiness. Mouthfeel was full, smooth & creamy, almost like an N2 pour. The taste was like a combination of milk chocolate, coffee and light cream. Man, this was a smoooooth, easy-drinking stout! So much so that I drained off half of it without even an afterthought. Finish was semi-sweet, bordering on semi-dry, but the chocolaty presence held things in check. It was a very pleasant addition to the day.

L: Pitch black, with a foamy beige head. Retention is minimal. A thin ring remains that leaves some spotty lacing.

O: An extremely flavorful stout for under 6%. An excellent display of oats, roasted notes, and fruity esters. A great beer.

Our first beer on our trip to California! This is a nice overall oatmeal stout. Nothing complex, just nice and drinkable. Enjoyed at the source... Firestone walker Brewery, Paso Robles, CA.

S: not very aromatic; what's there is deeply roasted grain and a hint of coffee;

T: deeply roasted grain from start to finish; mild bitterness at the end;

Bottled on date was late October so it may deserve I higher ratings if I had a newer bottle. It was a pretty good oatmeal stout with sweet chocolate and coffee flavors, as well as a beautiful color, but I don't think it deserves almost 90.

Look:
Very dark black (yeah black really is as dark as it gets). Only a 1-finger head. I expected a bit more. Head recedes, but it stays a tad bit foamy with a nice tan ring around the glass.

Taste:
Some hop bitterness, but more bitterness from the charred grains that are in this one. All scents from the aroma are in there as flavor (coffee, chocolate, charred wood, tobacco). Slight fruitiness - rich dark fruit. Starts a bit sweet, gets really dry, then when all of that fades, you are left with a smoky campfire and coffee-mocha aftertaste.

Feel:
Medium - but on the fuller side - bodied. Seems pretty thin for the style.

Overall:
Really good beer. Very desserty beer. Quite complex really. Many flavors and woody flavored. I am not sure if this one was barrel aged - I don't see any mention of it, but it tastes like it has absorbed flavor from charred oak somewhere. It could be just the heavily roasted dark grains. Very good. Firestone Walker doesn't disappoint.

Flavor is difficult to describe. Roasted malts with light cocoa flavor which is punctuated by tumultuous hop bitterness. Quite carbonated.

This beer was not very full bodied for a stout. Tasted kind of watered down. Surprised it was 5.5 ABV - my guess would have been much lower. Still better than a Bud.

I was fortunate enough to get a pint of this on nitro- so smooth! Very dark, with a thin, tan head. Streak lacing. The aroma is lightly toasted malt, espresso, and dark chocolate. The flavor is similar, with hints of cocoa and coffee. Another fine beer from Firestone Walker.