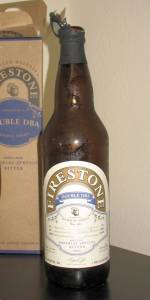 Bottle shared by Dave. Thanks man!

Copper crimson body with a half inch of soapy, khaki-hued head. Aromas of oak, vanilla, caramel, sweet bread. This beer has developed with age, akin to a strong English barleywine.

Appearance: Semi hazy amber color with light sediment in the glass with a mahogany tint to the glass. Orange tinted white head with a sticky head which initially rose roughly half a finger's length.

Smell: lighter butterscotch scent. Comes and goes and though great lacks that touch of potency to the nostrils.

Mouth: Medium carbonation but sticky beer with a mild bitter finish. I will tell you this, if you can smell with your mouth, there's a lot of body to the brew.

Overall: Good brew, took my time drinking this gem and wouldn't trade it for the world. I treat classics like this they way they should. Salud!

2012 edition... poured from a bomber into a Dogfish Head tulip

S: Caramel and toffee... sugars and sweets... some fruity notes.

O: A big, big beer... the 2012 version aged fantastically and at 7 years was still super. One to sip on a cold winter night. Very solid effort.

Had on tap. So right off the bat the coloring is way too golden for a barleywine, but otherwise fine. The smell of this beer is incredible, vanilla, toffee, large wood notes, brown sugar, malts, caramel, cherry, all kinds of booze and I could swear a little gingerbread. The taste and body fall short of this glorious smell however, as they both feel so disconnected, with all of this various pieces fighting for space instead of creating a cohesive unit together. Perhaps some aging would help meld flavor together? Hopefully because that smell is too good to waste!

2014 vintage poured into a teku

T- big malty sweetness up front with notes of caramel & toffee, molasses & brown sugar. Mid-palate brings out a bit of barrel character that adds some vanilla and a trace of toasted coconut. The finish is earthy & fruity, with notes of pipe tobacco, rum soaked raisins and dark cherries

L- Dark amber color with some head that doesn't last. A few bubbles are visible.

S- Caramel and toffee. A little booze. Some vanilla.

T- Similar to the nose. Smooth and balanced. Caramel and toffee, just a little booze. Some vanilla.

O- Solid and tasty. Good balance and easier to drink than you would expect at 12%.

2012 vintage. Not sure if it wasn't cellared properly, but it was horrible. I brought it to a bottle share and we couldn't even finish it, it was so bad. I was told that the 2012 were in their prime right now, hope this was a fluke...

2012 vintage. Exceptional beer. Dark amber pour that smells of vanilla bean, caramel, and molasses. Mellowed flavor but very sweet. Easy drinking ale for what it is. Perfect for a cold winter day.

22oz bottle poured into a snifter. 2013 vintage enjoyed on New Years Eve 2017. A lot of oak, vanilla, barrel in the nose with a complex taste with a lot of warmth in the finish from the alcohol.

A: Pours deep red orange with a tan head that settles to a thin layer and leaves a few spots of light lacing.

M: Medium to full body, mild carbonation, with a very pleasant warmth on the finish.

O: Age has treated this one well. Not overly complex, but you don't have to go searching out obscure flavors. It puts all its cards on the table and they play beautifully together.

Booze, heat, loads of caramel. This thing smells really good and the flavor follows on all those notes. Reading reviews that this started a bit too hot, I am glad I got my hands on a vintage bottle. Kept in good conditions (box always help from light), this has aged very well and I would gladly stock another in my Cellar if I could find one. Another barrel aged gem from the pros at FWB.

Kind of a light-tan-leather color, the brew forms almost no head on an aggressive pour, although little specs of suds cascade down the glass as it twirls.

Big, bold nose, layered and complex as they come. Oaky, bourbony, with distinct notes of tobacco and maple. Orange zest and cocoa edge-out the bouquet.

The flavors are crazy-smooth on the palate, helped by extensive cellaring I'm sure. Any sharp, tannic-like astringency has been replaced by silky notes of caramel and rum and carob. The brew is chewy, and decadent, as desert-like flavors wash in mid-sip, suggesting creamy raisin-rum. Boozy toward the finish, but not hot, as the brew closes relatively clean and quickly.

This beer is good fresh, but a few moons in the cellar make it ridiculously drinkable. As I've mentioned many times, Firestone has some of the best barrel-aged brews, hands-down.

Zythophile from District of Columbia

Appearance is a slightly opaque tannish brown with barely any head.

Smell is caramel, molasses, cinnamon, vanilla, cloves, and it's a little woody. I hardly get any alcohol.

Taste is sweet and savory, a beautiful combination. Sweet rye bread is the base, and you can tack on everything that was in the smell, but the cinnamon and cloves are diminished. The caramel has a nice scorched element to it. There's a spot of tea, too.

The last bottle I had was a few years ago, and I remember it being a bit thicker. A little swish brings out some carbonation, but well below the ideal. I don't get the alcohol until a little warmth after the last swallow.

I'm glad I have a couple more bottles.

My 1000th review and I have been keeping this one for a while. 2012 vintage batch one and it didn't disappoint. Hints of bourbon, deep caramel notes, with a slight fig finish. Smooth as a babies butt. Glad I waited. Nom nom nom.

Thanks, Nick! Didn't think I would get a chance to try this. 2013 vintage.

Pours a murky brown color. The head is a finger high and off-white in shade. I don't like the soda-like texture, and its retention sucks. Let's face it, this isn't a good look - when the best descriptor I can think of is "it looks like a glass of something scooped out of a septic tank at Chipotle", you know it's a poor-looking brew.

It doesn't smell like a glass of something that came from a septic tank at Chipotle, thankfully! The textbook barrel character of Firestone Walker is featured here, in full force. Plenty of vanilla meshes with a powerful oak character, and even a touch of coconut. It has a fairly light base (malt and ester wise) when compared to something like Sucaba - I pick up caramel, toffee, brown sugar, apricot, cherry, and peach to go along with the bourbon. There are some additional tones of butter (like DBA) and banana fluttering around. Put simply, it has the depth I look for from a 12% behemoth, though the aromatic strength is a bit timid thanks to the lack of head.

Its flavor opens up with the malt backbone appearing - caramel, toffee, brown sugar, and the like. Stone fruits lurk around the fringes. This certainly isn't another Sucaba, as the whole thing tastes a bit brighter to me. Past the midpoint, the barrel practically explodes on the palate. I start getting tons of vanilla and oak, even a touch of coconut. The profile, unfortunately, doesn't strike me as being terribly deep, nor does it seem well balanced (the bourbon barrel qualities pummel the base). It's not pure tannin water, but it's not far off from that ideology - I really wished the malts were showcased more effectively.

This is quite light on the palate, thanks to how tannic it is. I almost get the sense the oak barrels are pulverizing the base beer as it traverses my palate. Drinkability is excellent, at least, though it does feel fairly harsh going down. Carbonation is medium-low, as expected from the style.

I'm not a big fan of the normal DBA. But an imperialized DBA put in bourbon barrels? It's an improvement...but not a huge one. It's damn good if you like FW's typical barrel characteristics, but me, I want more of a balance between the base and the barrels. On the plus side, it's very easy to down given its strength (and age, to be fair). You know, I'm beginning to think FW's barrel-aged brews not named Sucaba or Parabola are pure hype...

2014 vintage picked up at the Tin Bucket Christmas sale.

A clear mahogany with a dense, off-white head that falls off to a ring rapidly, this looks decent. The nose is nice. Opening with a blend of toffee, caramel, a soft vanilla and coconut character from the bourbon barrels, with the coconut character being surprisingly fleshy and meaty. Mild prune and some raisin are also present. The malt character is really good, with the complex, bready, mildly nutty character of British malts but caramelized to lend notes of toffee and butterscotch. The palate opens moderately sweet with toffee, butterscotch, caramel and brown sugar, all on a silky smooth body. Booze and the classic FW bourbon character - mostly coconut with a heady dose of vanilla - is present on the mid-palate. Sweet and boozy on the finish with lingering toffee, coconut and vanilla, this beer is medium-full in body, softly carbonated and delicious.

Given as a gift December 2014. Served in a Duvel tulip at cellar temp

Look: Rich Garnet and Amber with virtually no head 3.75

Overall: this is an exceptional barley wine style ill that is as good as bourbon
county barley. A fantastic beer! I wish I had more. 4.75

In our vacation of over abundance out west, it seemed likely great brews would find us. It is one of them.

It's light copper colored with fine head. The aroma is a mild but pronounced smell. Sortof hops but not overly so.

The taste is a malty dry. This is an easy drinking dry ale. Highly recommended for those times when such a lovely lighter brew will work.