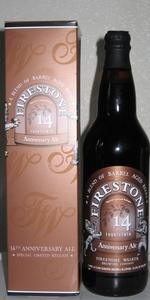 Drinkable but not enjoyable; clearly past its prime.

Poured into a Fremont small snifter. Pours a very dark mahogany brown, appearing opaque black in the glass with a thin brown head that dissipates to patches with slight lacing. Aroma of dark toasted malt, molasses, dates, vanilla, oak and a little oxidation. Flavor is dark toasted and caramel malt, vanilla, milk chocolate, dates, a little coffee and whiskey. Medium bodied with light creaminess. As always with this fine ale, the stout and barleywine characters are dominant, but well balanced. I get clear notes of Sticky Monkey too. Age has mellowed everything into a dark and malty whole with lots dark fruit flavors. Probably aged this a little beyond the pale, but it has held up beautifully. I'm not sure there is any reason to age these any longer. I'm going to be digging out my 15 and 16 too in the next few months. This is one of the great blended strong ales anywhere.

Bomber into a snifter appears dark brown with khaki head.

The taste is sweet caramel, vanilla, molasses, raison and slight papery oxidation in the aftertaste.

This is medium in body with light carbonation. Overall this was much better than I was anticipating.

Picked this up at Russell's in Amherst almost 6 years ago.

A - Poured into my Duvel tulip a nice deep dark brown almost black with a thin half finger fizzy mocha head that fades very quickly to leave a thin, thin halo and light wispy blanket.

S- Aromas of dark fruits, caramel, coconut, toffee, some light malt sweetness as well as some leather like aromas. Little bit of raisins. No discernible alcohol.

M - Mouthfeel is smooth and creamy, alcohol is light. Finish is a bit sticky.

O - Overall this was a solid beer. The age has really mellowed this beer out, but at the cost of it becoming very sticky and on the sweet side.

I actually had this with David Walker at Capone's Restaurant in Norristown, PA on 13 April 2011. I can't remember if it was draft or bottle and it's not listed in my notes, but I believe it was on tap. He explained to me what was in the blend it was made up from but I wasn't aware of any of those beers at the time so it didn't mean anything to me. But I told him I was aware of Double Barrel Ale, and that I used to drink that quite often. "But how's that possible?" he asked, "They haven't been available until now" - it was the Firestone Walker release party as they'd just started distribution in PA. "Ah, when you're traveling." he said, beating me in answering his own question, but no, I countered, that wasn't it. I had to think about it - "Ah, yes, I used to have to go to Maryland to get it. State Line Liquors." Which was actually traveling, but not in the same sense he'd meant it. He remembered. Apparently, State Line was the only place in MD that distributed it back then. Anyway...

Appearance: Brown -black body beneath a short head of tan that holds fairly well and leaves some minor spots and splashes of lacing behind.

Flavor: Mainly malty with creamy coffee, bittersweet chocolate, dark fudge, milk chocolate, a touch of oak, and molasses. Some fruitiness makes its way through with apple, sweet red cherry, and some fig and prune. It finishes dry with some alcoholic heat and nuttiness. The flavor fades quickly but the heat goes on.

Overall: Impressive. Quite a rich beer. I can forgive the alcohol a bit given it's greater qualities.

6 years old. A gift from a generous pal.
look: very dark, nearly opaque ruby. A modest tan head on the pour that mostly dissipates. Some transient lacing. Tick, viscous legs.
smell: Rich, complex, decadent nose. Dark fruit, vanilla, chocolate, coconut, oak, a hint of booze.
taste: Holy shit. All the flavors of the nose but instead of the sipper i was expecting, it is paradoxically rich, decadent, but easy drinking and mellow. It's, well....perfect. I wouldn't change a thing.

A very dark beer with a creamy darker tan one finger head. The head has some retention. The beer has some legs on it.

The mouthfeel is creamy, slightly carbonated, chewy, coating and the finish lingers pleasantly.

This beer is magnificent. The beer has taken to age very nicely, the flavor meld so well together and finishes on a phenomenal note.. Leaving my mouth salivating for another sip. Well worth the wait to age it. Just incredibly delicious.

The darkest in the history of the FW anniversary beers, this one drops black. Light tan head 1/4". So much bourbon and sweet cracker jack toffee nose stylings.

Another great blend, easy drinking despite the heavy malt and abv. Bourbon still heavy but not hot. You want complexities, jeez, chocolate, bourbon, oak, syrup, rum, brandy, smoked malts and wood. Strangely, not viscous, thinner than its appearance would suggest. Throw in some dark sugar notes to smooth it out with oatmeal.

The coffee and hops have, of course, walked away like Sam and Frodo taking the one ring to Mordor. The flavor that I felt most survived is that of the figs and cherry. Those dark fruits hit you in the nose and follow on the tongue in a manner that reminded me a lot of smoked bourbon. Beyond that, the nose was such a pleasant mix of bourbon, dark fruits, and molasses that my birthday celebrators and I had a conversation about just that for almost 10 minutes.

Like many superior blended beers, it was dangerously drinkable. While we sometimes like to hoard our good stuff, I was glad to have a few friends with which to share this. Having it alone would have left me blitz out of my mind, and I don't know that I would have felt right drinking a bottle like this without some friends to enjoy it with me. I realize that such a statement is not the greatest way to empirically describe a beverage, but sometimes the intangibles are what help us to enjoy what we're drinking. Honestly, think to yourself about the beers you've celebrated in the company of good friends, only to find that they didn't have the same level of enjoyment on your own. This is not to say that I would not have found FW14 delightful on my own, merely that this goes into a class of beer that is best enjoyed with people that help you smile, people that help you laugh, and, quite simply, people that deserve to share your best bottles.

S - Bourbon is still big and sweet after all this time. Also some cherry ,oak, and coffee.

T - Fluffy milk chocolate and strong bourbon, but that's about it. Noticeable lack of other flavors that pop. Also appears to have some oxidation with some black licorice and Sherry-like qualities. Subtle roasted malts and coffee too.

F - Velvety, smooth, and thick. Lack of carbonation is obvious as is the absence of alcohol.

O - FW Anniversary Ales are not meant for aging. Drink them fresh.

All most five years old and fantastic on all levels this was a wonderful beer drinking experience!
I now truly understand what long term cellaring does for a Great beer! Firestone Walker just might be the best barrel age beer makers in California and that is a huge statement!

Poured from cellar temp to tulip. Very little carbonation and jet black. The smell immediately permeates the air. Divine. Smells of molasses and licorice with some deep barrel notes. The taste is absolutely incredible. Five years from bottling (almost), and it's incredibly smooth. The licorice is very dominant. Some sweet, dark fruits are also very strong. Blackcurrant, cranberries, blueberries, vanilla, and a bit of citrus peel. Some heat in the aftertaste. Has held up really well over the years, and I'm glad I cracked it now and not later. Incredible beer from Firestone.