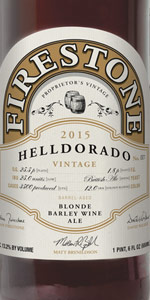 Notes: Part of the adventure of aging beer in retired spirits barrels is the synergistic interaction of different malt flavors with the oak and spirit flavors from the barrel. Darker beers like stouts and darker barley wines have typically been the favored candidates for barrel-aging, due to their deeper caramel and roasted flavors. Helldorado breaks that mold with a deep golden color from being brewed solely with English and American pale malts. The bready, honeyed flavors of pale malts pull out rich wildflower honey, vanilla and coconut notes from the oak, creating an overall flavor evocative of bourbon-glazed graham crackers that stands as singularly unique in our Vintage lineup.
View: More Beers
Recent ratings and reviews. | Log in to view more ratings + sorting options.
Ratings by wordemupg:

M not all that heavy for the nearly 12%, very oily on the palate, some heat going down, lots of honey and barrel lingering

O its good but I was expecting great, I couldn't shake the Honey Halls thing on the nose and the booze pops up a fair bit but I guess that's to be expected

I liked it but was hoping for something a little more, well and truly overpriced in the low 30's I can't see myself buying a second bottle to age and It needs age so hold if you got one

The pour is a kind of honey amber tone with yellow hues under the light and a modest, then disappearing off-white head.

The taste lines up as very, very sweet and malt forward with a powerful dose of toffee, caramel, Graham cracker and lower earthy hop note. I get a little more of that 12% booze in the flavor. Warming at the end.

taken from notes, 22oz bottle poured into a snifter

A: Poured into a snifter to a deep golden orange beer which is topped by a dense and slightly rocky two fingers of off white head which fades slowly to a collar around the edge of the glass
S: Smells of caramel, cocounts, faded hops, oak and a touch of vanilla
T: Taste is caramel, honey, faded piney hops with a little citrus, some coconut, oak, toasted malts, a little doughy bread, along with a little vanilla. On the swallow there's more coconut, caramel, faded hops, oak, and some slight lingering vanilla
M: This beer has a body which is on the slightly heavier side with a slightly syrupy feel. Carbonation is slightly effervescent and adequate for the style while the beer has a drying finish due to the ABV.
O: Overall this is a really well done beer. This lighter barleywine brings a lot of complexity to the party along with a really nice amount of balance. The beer has also held up very well for being bottled in 2016. Definitely a nice summery style of a barleywine.

Tasted clean golden honey with a little hops tossed in. Nothing bitter or overwhelming in any direction. Just about as perfect as you can get. Not too sweet or cloying like Aaron. The oak was masterful - think it produced a mellowness that just made this beer.

Awesome. Not sure how much the aging helped with, if any, but look forward to trying a fresh one sometime. Just a wonderful Barleywine. Cheers!

650 mL bottle. Pours very clear and very pale. Smells of bourbon, oak, booze, and honey. Tastes of booze, oak, bourbon, honey, light fruitiness. Dries out. Oaky and boozy back end. No lingering sweetness at all. Medium body and quite dry. Intense alcohol flavors and nothing to soften them. A little rough.

This could change my whole way of looking at barleywines. Vintage 2017, poured at 43°F from 12-ounce bottle into a thin-walled goblet and allowed to warm to 52°F. Slightly hazy, dark orange in color, with reddish-orange highlights here and there. Lovely aromas of vanilla, honey, light toffee, and coconut, with undertones of bourbon and oak. These characteristics obtain on the palate as well. At four years (give or take) from the bottling date, this is superbly mellow and very easy-drinking despite the booziness. This is quite sweet, with a silky mouthfeel and a touch of oaky astringence lingering on the finish. Overall, a very memorable beer that leaves little to be desired.

Looks pretty good in the glass. Golden honey colored body. Initially a lot of carbonation which quickly tapers off. No head, hence no lacing.

Mouth between medium and full. Finish sweet and slightly boozy.

I stopped into The Flight Center Nashua today for some Founders shtuff.... The owner said Firestone was pulling out of NH and he had a few last bottles... snagged this for $11 (pre-discount).

Poured a mostly clear bier into my sniftah... Has a rich copper color, with a creamy, fine , close-cropped light tan head. Lacing is mostly solid, all-in-all. Aroma had some vanilla, toasted malt, toffee, and subtle coconut. Body is medium-plus, with only light prickle on the tongue.

Flavor is semisweet, with bready, toasty malts. Had some honey, a touch of vanilla, and earthy notes. Bourbon aging is present yet subtle, with some oak action also present. Not boozy at all- yikes!!! Very nice!!!

L -- Looks straight up like a high-quality NEIPA in the glass. Lovely golden orange with a moderate amount of haze and a finger of pure white head produced with moderate pour. Minimal retention and some lacing
S -- Apple juice, molasses, peat, oak, wildflower honey, fresh grass, booze
T -- Light floral/honey sweetness alongside some grassy astringency from the hops and a bit of smokey oaky peaty character from the barrels. The aging has allowed the sweetness to mellow out wonderfully here, which ups the complexity immensely
F -- Bit mouthfeel, medium- carb. They did a good job on bottling this, no noticeable drop in carb over half a decade
O -- Wow. Sometimes I forget how critical extended cellaring is for barleywines to be anything but a sickly sweet mess. This was probably the best 'blonde' barleywine I've had. Although I admittedly do not buy FW offerings much, it's examples like these that make me sad they're ceasing distribution in MA.

Appearance - Pours a honey gold with a fingers of bubbly white head.

Taste - earthy, leafy, and floral hops upfront then quickly goes into the sweetness from the honey. The toasted malts, marmalade, lemon, and hint of vanilla follow suit. The earthy yeast rounds out the brew.

Mouthfeel - Medium to full bodied with moderate carbonation. Finishes chewy with the honey sweetness lingering alongside the warmth from the ABV.

Overall - A bold and flavourful brew. I like how the honey takes precedence over the hops as it makes for a nice engagable sipper.

2016 Vintage 11.8%. Pours a clear copper colour with minimal white head. Certainly a little sediment in bottle but did not hit my 8 ounce pour.
Aroma hits with the bourbon and oak; notes of toffee and vanilla, slightly floral.
Tastes of sweet caramel malt, vanilla, bourbon; a bit bready and oak flavour, toffee, and a touch of boozy warmth.
Full mouthfeel - sweet but not cloying - tame carbonation, leaving a treacle like effect on the palate.

Pulled this bottle out of my wine cabinet recently...
Pours with just a thin head...hazy golden color. Nose of Barleywine booze. Nice full balanced profile in each taste.
This blonde ale oozes butterscotch over the lingering alcohol. Long pleasing finish begs for another sip. Excellent representation of type.
2015 Firestone Helldorado.

December 31st, 2015 - My last beer of 2015 is Firestone Walker's Helldorado, and it's a proper send off. Flexing it's muscles right from the start, it smells like carrots and salads mixed together with a huge alcoholic and boozy nose. But the flavor is stickier and sweeter, while still featuring that blinding alcohol note. I then catch flavors of ginger cookie, carrot cake, orange frosting, and a long burn that settles into a orange liqueur glow. It's rough and tough, and could probably stand a year or two more in time out before coming out to play again.

Hazed bronze and effervescent with a half-finger of sand-tinted head that’s quick to dissipate into a wisp and soupy crown. Sheets of lacing, for the most part, quickly drop back into the glass — save for a few spots of lacing here and there.

Wood, vanilla, toffee and coconut stand out most in the nose, perhaps with a hint of pear.

Vanilla, toffee, pepper and wood show first in the taste, with any sweetness tempered by herbal hop bitterness and moderate alcohol heat.

Not as deep and mysterious as some from these guys, but a quality barleywine nonetheless. The wood definitely stands out here.

Pours a hazy yellow amber with a finger of white head. Some particulate floating about and such.

Taste is buttery toffee, mild bourbon and wood. Moderate floral peppery notes from the hops I'm guessing. Goes to bready malt with the bitterness lingering for a while.

Mouthfeel is medium bodied with medium carbonation. Quite lively on the pallete.

Overall an interesting brew. Has a rich butter cookie flavor profile with a nice bittering hop quality to reel it in. I always wonder how much age affects beers as they sit on the shelf. And for this one it's hard to tell if this one aged well or not so well. Enjoyable, but not extremely vibrant.

One of my favorite Barleywines.

A: Tawny colored with a uniform haze. Not unusual for beers with a certain amount of age on them. Virtually no head or lacing.

T: More or less follows the nose. Rich and dessert-like with blonde brownies, caramel, bread pudding, treacle and honey being called to mind. Traces of a mild and steely hop bitterness barley pull through. A gentle spike of alcohol helps tame the sweetness too. Toast. Vague fruity suggestions of dates and booze-soaked golden raisins. A mild taste of papery oxidation. Sweet overall, though it dries just a bit toward the back end. Caramel and toast finish.

O: Fortuitously I had bought some salted caramel cookies earlier in the day and they made for a great pairing here. It’s a fine beer, but I think I preferred it younger. This will not be one I hang onto for long in the future. It still hit the spot though. One of the better Blonde Barleywines out there, though there aren’t many.

Helldorado from Firestone Walker Brewing Co.
Beer rating: 95 out of 100 with 1085 ratings