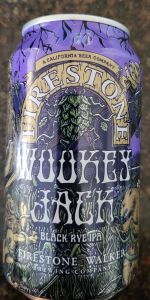 Reviewed by simonrgilbert57 from California

4.58/5  rDev +7.8%
look: 5 | smell: 4.5 | taste: 4.75 | feel: 4 | overall: 4.5
A really excellent beer that makes me want to explore more black rye IPAs. One of the best looking beers I've ever had--color of a porter on the light side with a head of an IPA. Laces beautifully. It has a short, hoppy nose. Taste is excellent with the dry hops coming out from front to back of the mouth. Feel is a bit boozy and ever so slightly overcarbonated but that's the only real downside. Superior brewmanship from Firestone Walker.
Feb 27, 2021
Rated: 4.52 by Sinister from New York

Reviewed by Altrurian from Portugal

4.56/5  rDev +7.3%
look: 4.5 | smell: 4 | taste: 4.75 | feel: 4.75 | overall: 4.75
Reviewed off a note I made back in 2013 or so, even though the review is being submitted in 2020. Pours inky black, with a tight, small ecru head. Good lacing. The smell is not roasty, but lightly floral and fruity; more apple than berry. The taste is of a smoky, bitter roastiness. There’s a bitter aftertaste, but a clean finish. It’s like bitter chocolate, with a hint of ashes, leaving (perhaps despite these similes) an overall quite good impression. The feel is that of smooth, foamy carbonation. Great beer! Too bad it’s evidently no longer out there.
Sep 05, 2020
Rated: 4 by ryanf2192 from District of Columbia

Reviewed by Anders91 from California

Smell: hoppy, with a bit of malt

Rated by fckedup1287 from California

Reviewed by HopsAreDaMan from Missouri

22OZ bomber. When I bought this it was sitting in a refrigerated cooler at a grocery store, and the date on it was 12/19/14 (at over 7 months old); my guess is, being chilled, it retained most if not all of it’s hopped flavor. It was a very good beer, with lots of hop flavor, and a very heavy mouth-feel. It poured very dark, with a nice, light, caramel-colored head. It is one of the better (if not one of the best) IPA type beers I have had.

Notes via stream of consciousness; A friend of mine introduced me to Wookey Jack about a year ago. He had a 6-pack at one of his parties and I ended up drinking almost all of it. It immediately became one of my favorite beers. I love that it's hoppy, but not so much so that the malt can't compete, and that the rye shows clearly; and looking at what I've got in front of me, given that it's well over a year old, it's surprisingly hoppy - I could smell the hops when I opened the bottle. Anyway, I'm not sure when this was discontinued but I haven't been able to find it - I'm sure there are fresher bottles around, in fact this one from Total Wine & More was probably bottled before the ones that I got from my friend! I bought it anyway, despite the price, because I like it that much; and to be honest, upon tasting it now the malt has held up extremely nicely as well. There's a touch of oxidation there, sure, but it's not bad, I'm still enjoying it. All of the dark chocolate is there, the softer fudge-like and caramel notes, the roastiness, the spice from the rye, and the pine and citrus from the hops - and if there's one thing that's missing it's that the citrus seems to have waned a little. Oh man, I'm going to miss this one. Hopefully I'll come across some that's been discounted and I can buy up the lot. I said before that if the new Leo v. Ursus beers were all as good as the Forte it would be worth it to discontinue some others, but sitting here with one in my hand I doubt that. This is the best black rye IPA that I've ever tasted, and probably one of my top 10 favorites - or at least one of my top 10 favorite dark beers, that's definite. A moment of silence. ... ... ... Wookey Jack, you will be missed.

3.99/5  rDev -6.1%
look: 3.75 | smell: 4 | taste: 4 | feel: 4 | overall: 4
The appearance has a black body with a three finger off-white foamy head, leaves some clingy slightly foamy lacing in rings. The smell has some slightly roasted coffee. There is some rye, slight citrus/pine coming through in a spicy sort of way. The taste is mainly bitter, some slight coffee - but mainly subdued, hopped - yes, but balanced and extremely flavorful. There is a dry yet bittersweet aftertaste and finish. On the palate, its about a medium, comes across fairly sessionable - maybe perhaps, and the ABV slightly felt. Overall, I’d say this is very good for a Black Ale and I would come back to this.
Jun 04, 2017
Rated: 4.23 by Biggiekrock627 from Maryland