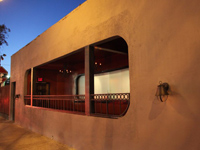 View: Place Reviews
Reviews: 38 | Ratings: 64 | Log in to view all ratings and sort
Reviews by Hojaminbag:

The Surly Goat is in West Hollywood, which seems to be a trendy neighborhood to me. The Surly Goat itself, at least, is a trendy type of place. I walked in on a Thursday night and it was pretty packed with well-dressed, young, professional-looking people. People were pretty friendly though, as a group approached my friends and I to start a conversation and hang out for a good chunk of the night.

When you walk in, the bar is directly to your right, with the tap list written on individual chalk boards on the wall above it. The rest of the bar in front of you is divided into three sections, with the sections on either side raised a little bit. On the right is a door to some outside seating, which is great for a night in Southern California.

The bartenders were polite and very efficient, taking care of everybody as fairly as possible on such a busy night. Both were females the night I went, and both were pretty cute.

Now onto the beer. The tap list was impressive, and can be found at all times on the website, so there is no need to go into an in-depth discussion here. I had an Abyss which was great, if you want to know more, go to the website.

The bottle list was fabulous. The list itself says that all the beers on it are stored at 50 degrees and made for cellaring. Some of the highlights were Black Tuesday (75$ does any other bar sell this???), FW Anniversary 12&13 (32, 36), Black Butte XXI (18), Cuvee de Tomme, Russian River temptation and Damnation, and two vintages of the Abyss. These were the highlights, but there were other beers. I would have been happy ordering every beer on the menu, but I didn't have the cash.

Overall, the Surly Goat has one of the most carefully chosen selections of beer that I have seen in any city, and definitely the best I encountered or found in the LA area. Quality and quantity. Prices weren't cheap, but for the area and quality of beer, I was more than happy with it.