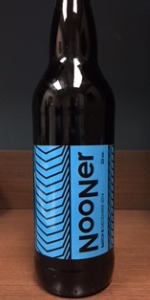 The hazelnuts show a lot. Very toasty and nutty. Had a butterscotch flavor to it. Not my favorite of the cycle stouts, but worth a try.

Recently nabbed a handful of Cycle stouts in a few trades after wanting to see what they hype was all about. Drank from a 32oz Crowler, unsure off fill date, but it was from when they emptied out all their remaining kegs and sold them all in crowlers. Probably should have had this the second I got it, since the person I got it from had already held onto it for well over a month. Anyway, by the time I opened it on 10/11/15, it still tasted great, but the hazelnut aroma and taste were nowhere to be found. I'm not usually a huge hazelnut fan so I feel like I definitely would have been tasting it strongly, but it just wasn't there. However, upon opening I was assaulted (in a great way) by huge fudge/chocolate notes.

The chocolate aroma is so strong that it hits you while the glass is still a couple feet away from sipping. It actually reminds me a lot of Even More Jesus from Evil Twin. Some nice coffee notes in there too, but the coffee is still somewhat subdued or rather overwhelmed by the milk chocolate and brownie taste. There is also a definite sweetness to it, which I kept on wanting to think was due to the hazelnuts that I was searching for in vain, but I think it was much likelier the barrel character from the rum barrels. On the whole, really bummed that I didn't get to taste this beer as it was intended to taste and in the manner which most reviewers seem to have experienced it. However, I tried not to let that affect my ratings too much, as it was still an extremely tasty stout that stands alone well and that I would happily drink again if accessible.

Really delicious hazelnut. This is dessert. Huge hazelnut nose and taste. Impressive execution of that flavor. The base beer is just a hint too thin to carry the barrel and the hazelnut. Lacked a richness to round out those flavors.

Beautiful nose with a lot of hazelnut and spiced barrel. Taste is very similar and good, but not quite living up to the nose. Solid finish. Very good overall beer, bummer this is the last of the rarer dos beers.

Quite possibly the best beer I've had to date. The only other beers I've ever had that can compare are Nutulhu and KBBS.

Taste, Mouthfeel, Smell: All amazing. The hazelnuts come through perfectly in the nose. The mouthfeel is silky wave after wave. The taste is chocolate dipped hazelnuts.

On draft at 2 year anniversary party. The hazelnuts have faded, but the aroma is still amazing with toffee, fudge, oak and vanilla. Rum is soft, but blends nicely. The oak gives it a smoked flavor, but turns a bit tannic on the finish. Taste is slightly medicinal, but the toffee and fudge flavors are amazing. Mouth feel is light to medium and silky smooth. This is delicious even with a couple flaws.

I love cycle, I'm just not a big fan of hazelnut heavy beers. The flavor takes over and is too sweet in my opinion.