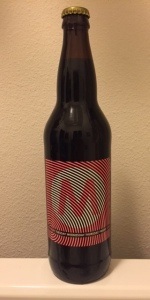 L: pours very thick, black pour with a film of mocha head that fades fast. Pitch black in the glass.
S: sweet maple, good amount coffee and dark malts, slight bourbon.
T: oh yeah! Get all the flavors in the nose plus cinnamon! Oddly all hear flavors blend well together. I wish there was more Barrel though.
F: medium thickness, highly carbonated, decently smooth too. No alcohol heat though.
O: all these adjunct flavors held up well for being a year old. But lacking barrel.

Got this one from desp59 a while back. Cheers!

APPEARANCE: Pours out clear black and yields a massive, four finger, slightly looser but still creamy looking, dark tan head with good retention. A little fizzy action going on here too. Jet black body with no real carbonation evident. Head slowly fades to a full, foamy cap and sticks to the sides a bit. Splotchy wisp remains leaving touches of lacing down the glass. Looks the same as many of the other weekday beers but with a bigger, foamier head perhaps.

SMELL: Nice nose with plenty of cinnamon initially. Some coffee aromas in there, with faint but definitely notes of maple and bourbon. Toffee, butterscotch, milk chocolate and some sweet cream round out the nose. The cinnamon is definitely the main player here but that’s not all there is to the story.

TASTE: Cinnamon, light maple and some barrel character up front. Some alcohol at the swallow with another hit of cinnamon before moving into a bold and lingering finish of cinnamon, bitter coffee flavors, some bourbon, toffee, milk chocolate and sweet cream. The maple is pretty mute after the swallow and the cinnamon runs the show a little, but the overall performance is quite enjoyable. Light barrel aging as well.

PALATE: Medium body and medium levels of carbonation. Creamy enough on the palate, goes down smooth and finishes a bit mouth-coating. A touch of heat lingers.

OVERALL: Great stuff! The cinnamon is definitely the star of the show and the maple bourbon barrel is a little in the background, but it works just fine. The coffee addition is nicely done as well. This is a really well executed, enjoyable stout and I was sad when it was finished. Something worth tracking down if you’re a Cycle fan, which I undoubtedly am. Thanks again desp59!

Bottle received in a recent trade.

This one pours a very dark black, with a small reddish-head, and a good level of lacing.

Smells like an utter cinnamon bomb, spicy and sweet, with some coffee, coconut, fudge, and roasted malt.

This doesn't really have any maple character to it, and the cinnamon absolutely dominates. It plays well with the fudgy character I get out of most Cycle stouts I've had. There's a bit of roasty coffee, roasted malt, maybe some licorice? All the other flavors pale in comparison to how strong the cinnamon is. I wish for a bit of balance, but it's still quite delicious.

This is thick bodied, but not syrupy, with a good level of carbonation, for the style.

I haven't had a Cycle stout that I've disliked it. This is great, but not quite to the god tier level of other Cycle stouts I've had (Pallet 4, Nooner 10, etc.)