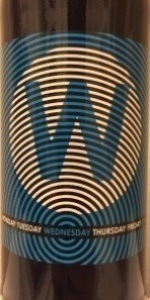 Reviewed from (long-standing) notes. Consumed on 1/7/17. Poured from 22 oz. bottle into an El Catador Barrel-Aged glass.

S: Cinnamon, chocolate and hazelnut up front. Then vanilla, cacao nibs, bourbon, and oak with mild coffee and drying tobacco behind. But mostly this is hazelnut with a cinnamon backer. The aroma on this beer manages to be both complex and different. Really, really nice, and exactly what it promised. I could smell this all day.

T: Follows the nose. Cinnamon, chocolate and hazelnut up front. A big malt body – sweet and roasted. Oak, vanilla and mild bourbon. A mild coffee roast to the malt bill, then more cinnamon and dry hazelnut. A nice nuttiness lasts though the swallow.

M: A nice heavy body, though maybe not quite as heavy as some of Doug’s stouts. The alcohol presence is incredibly mild for style – the bourbon stays fairly mild, though it still has some woody barrel flavors. Low carbonation sensation overall, but expected for style.

O: The barrel flavors are mild at best here. But even after almost a year, this is a hazelnut bomb with nice cinnamon flavor as well. Although the cinnamon-hazelnut combo might not be my personal preference, this is really solid if that seems like a good idea to you.

Really nice beer! Balanced fairly well, hazelnut more prominent than the cinnamon but that's not surprising with almost a year on this bottle. Overall, a great beer and happy to have tried it.

Dark brown to black in color with tan head; nose cinnamon, hazelnut, roast; flavor more of the same; some subdued barrel notes; quite sweet; body perhaps on the thin side for the style; smooth, creamy and drinkable.