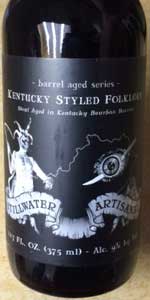 Notes:
View: Beers
Reviews: 14 | Ratings: 37 | Log in to view all ratings and sort
Reviews by JakerLou:

As others have mentioned this definitely drinks more like a dark fruit sour than a stout. The only thing that seems "stout like", to me, is a bit of roasted flavor on the finish (bitter chocolate). Not a bad beer but not what one expects when the bottle says BA stout on it.

As it warms it starts to taste a bit more "stouty".

Mislabeled as a stout, this is an infected BSDA. A gusher on opening it pours an attractive dark brown with tan head. This is mildly sour beer with strong, astringent bitter oak barrel flavors. There is also a strong roasty flavor - I'm not sure if its from roasted malts or from charred oak. It's like licking the inside of an oak barrel. The mouthfeel is thin but with excellent effervescent carbonation. This is a mess of a beer and is not recommended.

A: The beer is very close to being jet black in color—when held up to a very bright light, only traces of reddish brown are visible near the edge of the glass. It poured with a quarter finger high tan head that died down, leaving wispy lacing on the surface and a collar around the edge of the glass.
S: Light aromas of oak and bourbon are present in the nose along with some hints of dark fruits.
T: The taste is similar to the smell, having flavors of oak along with notes of bourbon and underlying hints of dark fruits.
M: It feels light- to medium-bodied on the palate and has a moderate amount of carbonation.
O: I wouldn't really classify this beer as a "stout" as it's more like a barrel aged Belgian Strong Dark Ale. The bourbon flavors are initially very subtle, but become a bit stronger as the beer warms.

This beer pours a motor oil black body with one finger tan head and has an aroma that is like molasses/syrup, toasted malts, oakiness/woodiness and even touch of dark fruits. Thick bodied, sticky yet smooth, the barrel aging keeps beer smooth while giving off minor booziness and vanilla sweetness. This aspect is balanced with roasted malts, hints of chocolate, and I up faint Belgian characteristics like yeast and dark fruits like figs/plums. Interesting beer that reminded me of a Belgian more than stout and while not most flavorful beer it is enjoyable.

Folklore is a BSDA, but the label on this beer states "stout aged in Kentucky bourbon barrels" but sure don't taste like no stout. Enjoyed (sort of) from a Stillwater wine glass.

a - brew pours a deep brown black that settles in the glass black. There is a creamy Belgiany head that hung out and left nice lacing.

s - nose is a sour puckery over dark Belgian candied fruit. The barrel comes through in a raw Rough way and spirals this beer in the sour direction.

t/m/o - as the nose suggested, sour. Tart Belgian strong dark ale...ironically I found the pvw folklore to be more stouty and this one, that says "stout" on the bottle (that MUST be a typo), to be way more folklore...but definitely something is going on here. Mi would wager that this is not intended to be sour, but she is sour...so drink now who still drinkable. Bourbony sour over dark fruit, fairly forgettable but thankfully price point was under 10, I would still recommend passing on this one unless you like unintended sour beer. Not a drain pour, but meh...who knows if time will turn this into a masterpiece, but I wont try to find out.

The beer pours a dark, but not inky, black with a loose and foamy tan head that provides mild lacing. The nose is burnt sugar, chocolate, and hints of vanilla bourbon. The taste has a few more elements I'd expected from a belgian strong ale - bready yeast, warming alcohol, some spice - along with the same chocolate-y bourbon sweetness that dominates the nose. However, in the taste, the latter elements only seem to come off as rough and astringently bitter. It's medium-heavy body is drinkable, but lacks the richly sweet smoothness you'd expect from a BA stout by comparison. The lighter body and fruity yeast presence are interesting elements, which set this beer apart from the typical heavy beers that are laid to rest in bourbon barrels. Overall, this beer's enjoyable to drink and seems to harmonize the elements of a strong belgian and barrel well.

an entirely different take on a bourbon barrel aged stout, this is unlike any other, mostly because of how weird the yeast is and how light the body is, and its nothing like its base beer either. its the right color in the glass, almost the same shade as the label on the bottle, and has a fairly sturdy off white head. its thin though, not clinging to the edges of the glass at all, and certainly not looking as viscous and intimidating as most in its genre. the nose is brett and funk, more saison yeast than stout qualities, its tartness comes through more than the barley roast or the barrel. after one sip, this is more wild ale than stout to me, and way more funky than the base beer, which wasnt nearly this advanced. im wondering if there was some unexpected bacterial stuff happening in the barrel. i like with wild yeast nature of it, but it covers up the stout i think, and the bourbon barrel seems almost out of place in this type of beer, thin body aside. the more it warms up the better it gets, but i should have aged this one awhile. i have had sour stouts, and this isnt that, its something much different. very very dry, some bitterness, wine-like acidity, and a challenging beer on the whole to say the least. you would never know its this strong either. it really caught up to me. for the price i might buy it again and sit on one, worth trying, but super strange

Had this on 3/1/15, accidentally put it under "Folklore - Bourbon Barrel Aged." Wish I would've drank that one, sounds better. Thought this had a weird/early infection, but it might be partially sour mashed. I say this because it tasted kind of weird for an infection (almost likable), also the beer's name is "Kentucky Styled." The only beer style from Kentucky is the Kentucky Common, which is sour mashed. That could be reading into it too much though, couldn't find any additional info when I searched.

Stillwater commented on aging it "drink up.. it's already been aged." Yea, barrel aged stouts are obviously the worst candidate for aging... You think they'd add more of an explanation, lots of people enjoy aging barrel aged stouts and most can be ("stout", beer buyer told me this was maybe blended with BSDA/regular Folkore, but the person was being shady/unclear. Can't remember if he heard that from a distributor or Stillwater rep though. Also, just taste it...) In any case, the lack of transparency with this beer is really upsetting. If it was sour mashed, say that on the label. If it is an infection, add "wild" or something to the title if you're still going to sell it. Pretend you meant to sour it like other breweries do and battle with your conscience for awhile, even jack up the price because that souring bacteria adds cost, right? If you have barrels in the same facility as wild things, send a sample to a lab because you are a professional brewer and are trying to take people's money (for something you're proud of or simply because you want it?). Wasn't disappointed with the beer overall (besides the price point of $10 for a 375), just the deception. Nothing on the bottle indicated sour or funk and there's no information online.

On to the actual beer. Weird slight funk that might be a tad sour and dry up front. If it was an infection, then it was one of the few I've thought tasted alright/a little good. Not like Tart of Darkness where the funky sourness tastes intentional and undoubtedly good, this one makes you wonder. Led into intense roastiness and decent chocolate, this part was very good. That sourness combined with the roast definitely tasted weird after the initial bursts of char, almost terrible, but kind of good at the same time, walking the border... Glad I didn't wait another day to drink this, could've went horrible real fast.

This wasn't a bad beer when I had it, but I left very disappointed in the perceived secrecy. Don't want to have to email you for information about the beer you created, especially when you bottle/price it as something special.

Everyone makes mistakes, just admit it, will take a lot to buy another BA beer from these people. Can't say I plan to buy any Stillwater in the foreseeable future. Have had 14 beers from them now and only one was more than pretty good, the Westbrook collab using Westbrook's gose as the base. I think Stillwater banks on the fact that not too many distributing US breweries are focused on saisons right now. That can be seen in Prairie too, who are able to charge a good amount for their (much better) saisons. Hope this changes soon. For my tastes, Stillwater is worth $2, maybe $2.50, per 12 oz/375 ml bottle right now.

The palate shows noticeable acidity, with sour fruit, tartly roasted notes and a bit of barrel roundness. This was a deliciously sour stout, unfortunately, I am not sure if that was the intention, and if it was, shame on them for not labeling it as such. As a sour stout, it is delicious, and I will enjoy my next few bottles as such. As a barrel aged stout promising richness and roundness, it does not deliver.

As others have mentioned, I'm pretty sure this was infected (unless Stillwater was going for a sour stout, which doesn't appear to be the case from the label). Gusher upon opening, strong sour smell, and a tart fruity taste. Definitely not what I expected and probably not what was intended.