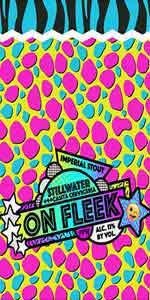 12oz can stamped BATCH #021 poured into a Spiegelau stout glass at just above fridge temp 13% ABV. The beer pours impenetrable black with abundant medium brown colored head. The head recedes to a thin cap and leaves a little lacing. The aroma is mild with molasses and dark sugar. The taste follows with bittersweet molasses, dark chocolate and roasty miderate bitterness. The mouthfeel is medium plus bodied with a little less than medium carbonation and a mostly dry finish. No sign of the ABV in the taste or aroma. Overall, very good. The range of flavors is limited and focused mostly on molasses, but it's done very well.

I’m mot a beer expert, by any means. Heck I love hamms light. So what do I know? This beer is pretty good. It is potent. Strong molasses flavor. Reminds me of one of those cookies. Very easy to drink though. These were gifted to me, so I’m not sure the cost, but I would certainly drink it again, if reasonably priced. Gorgeous to look at.

A: The beer is jet black in color. It poured with a quarter finger high tan head that left a collar around the edge of the glass, a thin layer of bubbles covering the surface, and lots of specks of bubbles clinging to the sides of the glass.
S: Moderate aromas of dark malts and licorice are present in the nose.
T: The taste follows the smell and has additional hints of burnt malts and molasses, although the latter doesn't have any associated sweetness.
M: It feels medium-bodied and smooth on the palate with a moderate amount of carbonation.
O: The body of this beer was a bit thinner than what I would have expected for a 13% abv stout. With all of the toasty and burnt flavors, it seemed like it was a hybrid between an American Imperial Stout and a Russian Imperial Stout.

Little bit of plum and cherries and booze on nose. Chocolate and fig on palate. Sweet roasty finish.

Purchased a single from a local shop for $2.99, Pours very dark and very thick. Does a great job hiding the high ABV and has strong coffee and chocolate notes. A very delicious and excellent stout and great overall value. Would definitely seek this out again.

Ridiculously gorgeous deep color. Nice head.
Extremely smooth feel. Very very nice blend of many different flavors going on. Not much scent to my nose. Alcohol is present but not overwhelming.

Excellent beer for this style. Not cheap, but worth it.

Edit: I have bought this pack more than once, proof of it's overall excellence.

12oz can received through the generosity of Whyteboar. Canned on March 4, 2019. That would be troubling for an IPA, but for a 13% stout, I suspect it will be just fine, perhaps even an improvement on a freshly canned example.

Poured into my trusty Iron Goat shifter, this was a dark brown brew of impressive viscosity when poured, and assumed a look of utter blackness once in the glass. A thin, mocha colored head was briefly visible but fled early, not surprising when you consider the strength of the beer.

Decent depth of aroma for a non-ba stout. I get scents of coffee, cocoa and booze.

A bit more bitter in the taste than in the nose, but only to the point where the beer is improved by the increased complexity. There's a molasses-like syrupyness that is kept from being cloying by a bitter char. Right at the finish things become slightly fruity, reminiscent of cherries or plums.

This is a really nice Imperial Stout. Most non-ba stouts of this magnitude, in my experience, miss the flavors brought by time in a barrel. This one doesn't. Anybody know if this is done with a Kveik yeast? The fruitiness at the finish sorta reminds me of that. Whether it was or not, this is a seriously outstanding example of the art and science if brewing. Thanks, Craig!

12oz can poured into a snifter

T- roasted malts give way to a bold sweetness, that adds flavors of chocolate, espresso & dark fruits. Dark cherries and black licorice on the finish, lingers of roast and a hint of alcohol

O- a solid, straight up stout, no adjuncts needed

Black with little tan foam head. Coffee and molasses, chocolate and slight bourbon. Boozy but balanced, slight dry and chewy mouthfeel. Nice buzz off this one, a one and done. Recommended

Great stout easy to drink, nice abv to get that buzz.A must for the beer fridge