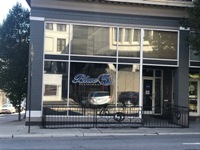 Rated by slusk from Virginia

Rated by Craft_Imperial from Pennsylvania

There is a small patio in front to the left of the door. As you enter, the bar is on your right. It is polished concrete and seats about 15.

They had their house band playing while I was there and they were good and bluesy. There are a few TVs so you can catch the game while sitting at the bar.

There is a stage in the front of the room and an open second level over part of the room.

Service at the bar started slow but picked-up as the night went on. They are friendly, pretty beer savy and free with samples.

The beer list is solid. I counted 42 taps. They also have a good bottle list. They have a great variety of brewers and styles.

They have a pretty big menu. Lots of good higher class pub grub. I liked what I had.

To me prices seemed decent. Some beers seemed high but there are some awesome lower priced choices like Old Foghorn for $5.50 and Victory Kirsh Gose for $5 which kind of off sets the $6 Vienna lager from Devils backbone.

This is well worth a stop!

Reviewed by dsigmon from Florida

Reviewed by Claytonbrewsby from Virginia

4.74/5  rDev +7.7%
vibe: 4.25 | quality: 4.5 | service: 5 | selection: 5
The best bar we have here in Roanoke, VA! Always a great selection of brews on tap. Usually a pretty busy, and happening place. Always good blues or jazz bands playing at night. Great service and knowledgable staff. Never a cover charge at the door, right downtown, and away from all of the obnoxious redneck bars. ALSO just a block away from Roanokes finest restaurant, The Texas Tavern. Best Chili on earth
May 09, 2013

Reviewed by Ndebtpilot from Texas

Reviewed by brother_kenneth from Virginia

There are 46 taps, several of which are regularly rotated. The "staple" beers are there, and they make up quite a nice list, including Dogfish Head 60 Minute IPA, Stone Arrogant Bastard, BBC Bourbon Barrel Stout, Green Flash Imperial IPA, Oskar Blue's Dale's Pale Ale, and that is only naming a few. There are constantly new beers being tapped, some of which are extremely limited (so you better get there fast, if you want to taste 'em!). Notable past taps include Dogfish Head's Bitches Brew and 120 Minute IPA, Foothills Sexual Chocolate, Oskar Blues Gubna, Weyerbacher Imperial Pumpkin, etc., not to mention the occasional "tap-takeover" which is always worth attending!

In general, there is always something good on tap, but in my experience, there is rarely an occasion when I have to settle for something that is just "good." I usually walk in and find something incredible! The restaurant recently began offering growler fills as well, and I am told that they have reasonable prices.

The food is always delicious. Blue 5 tends to focus on southern-inspired cuisine, and let me tell you, they do a wonderful job at it. Shrimp & Grits is a good choice, and there is usually a very nice chef's special if you are looking to spend a bit more. The staff is awesome! Most of them seem to know a good deal of information about what they are serving, and many of them are beer nuts themselves!

Long story short, Blue 5 is leading the way in and around Roanoke, Va as far as craft beer is concerned. Many other places continue to open, claiming that they too will offer a multitude of craft beer. Yet I end up finding very little more than Roanoke Railhouse and Fat Tire. Blue 5 has obviously established a good relationship with their distributor and many breweries, otherwise they would not be able to constantly get as many awesome kegs as they do.

Do yourself a favor and stop in for a brew sometime!

Reviewed by HoppyDave01 from Virginia

4.4/5  rDev 0%
vibe: 4.5 | quality: 4.5 | service: 4 | selection: 5 | food: 3.5
By far the best place in southwest Virginia for fresh beer on tap. Now at 46 taps and planning to expand again with additional taps in the coming months. While the food is barely above average that is not the reason to go here (and the menu is actually getting a little old). This place is a blues club that serves great beer with live music almost every night (closed on Sunday), the taps are well maintained and serviced by the distributors and turnover of brews on their rotation taps is pretty regular. When a rare one shows up you need to get there quick because followers on their email list and facebook are sure to be on top of things and drinking the rare beers right on up. Avery's Maharaja didn't last one evening - nor did Dogfish's 120 Minute.

Also is great to know that you can always get some great beers like Stone Arrogant Bastard and Dogfish 60 Minute because they are apparently committed to keeping them always available.

Reviewed by CpnYates from Virginia

4.2/5  rDev -4.5%
vibe: 4 | quality: 5 | service: 3 | selection: 5 | food: 3
With the recent tap addition Blue 5 just became a serious player in the craftbeer party in a city that is quickly coming to age. Now with 46 drafts on tap focusing on premier breweries such as founders, stone, Greenflash etc. The beer prices are reasonable, from 450 to 8 per pint, with a dollar off at happy hour (4-7), with other nightly specials.

This place can be a bit overreaching as far as their food prices go for what I would describe as average food, but their draft selection and bar area is what this site is about, and on that account, they are darn good. Also the group venues downstairs and up are excellent for larger gatherings. No parking on site, but a pay lot next door and the the Church avenue garage a block away.

Reviewed by mhrivnak from North Carolina

Pints were $5. The bottles were only the usual junk macros.

The one disappointing aspect was the lack of local beer. Roanoke Railhouse Brewery makes a fine beer called Track 1 that is available around town, but Blue 5 did not have it. Sure, there are better English Brown Ales (I'll save the details for another review), but this is a very respectable one. Especially in a small beer market like Roanoke, beer establishments should support each other. I hope to see Track 1 on tap the next time I visit.

I went on a Saturday night, and there were two bartenders working. Both had more cleavage on display than knowledge of beer. A curiosity is that most items on their beer list show only the name of a beer, but not the brewery. For example, it lists "Bourbon Barrel Stout". I asked who the brewery was, and the bartender didn't know. She asked the other bartender, who took a guess and was wrong. Ditto the Snow Goose Winter Ale. Thanks to my iPhone, I was able to hop on BA and answer these questions myself.

The food is very good. They pride themselves on food quality, and my experience shows that they are doing a fine job. The food prices are a bit higher than what you'd pay somewhere like TGI Friday's, but you get what you pay for.

The location is quite central. It is just a few blocks from the very popular "Market" area of downtown. It is equally close to an art museum, science museum, and the excellent Transportation Museum.

The bar is located very close to the restaurant's door, which can be chilly. I was there on a cold night in February, and I kept my jacket on. They should seriously consider installing a two-stage doorway to reduce the cold draft.

If you want to drink beer in Roanoke, this should be your first stop. The next time I pass through Roanoke, I will definitely visit this restaurant again. Don't expect any substantial guidance in choosing your beer, but I think you can feel confident that there will be a number of very good choices available.