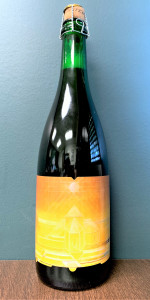 Notes: 3 Fonteinen Oude Geuze is a blend of one-, two-, and three-year old lambics. Spontaneous fermentation, patient maturation in oak barrels, and continued evolution of the ecosystem in the bottle result in a distinctively complex and elegant natural beer. No two bottlings are alike, as there are multiple variables in the blending process, a variety of barrel sizes and shapes, differences in aged lambic proportions in the blend, etc. When cellared properly, 3 Fonteinen Oude Geuze can be aged for several decades. The aromas and flavours will evolve from notes of vibrant fresh citrus, zesty and grassy notes to a mellow, oaky, stone fruit bouquet as the lambic continues to develop with time. Lambic and Geuze are living, cultural heritage rooted in the Zenne valley! Taste, savour, enjoy and experience this bottle fermented, unfiltered, unpasteurised and unadulterated beer with friends new and old! Somewhere in the season 14 | 15 ...
The young lambic in this assembly (about 60%) comes from a brew to which 100% natural linden honey was added during cooling on the cooling vessel. Honey enzymes provide a round mouthfeel and a dry aftertaste.
View: Beers
Reviews: 5 | Ratings: 32 | Log in to view all ratings and sort

750ml bottle, Felix de Boeck label, comes with the box, wrapper and pin, all the bells and whistles. Fancy stuff, been stored in a cold basement since release. Looking forward to trying this one for the first time on my birthday. Cork comes off with a resounding pop. Bottle served in a lambic cradle at cellar temperature, of course.

Appearance is medium copper body. Certainly darker than the standard 3F OG, probably from the extended aging time. Plenty of carbonation, big two finger white head that is on the verge of being annoyingly overcarbonated but is reasonable without having to put down the cradle to let things settle down.

Smell is damp oak. Lots of damp oak and a bit of sherry. Mild-moderate lemony acetic acidity, a bit less bright and expressive than some of the other OGV's I've had. However, the barrel contributes a fair bit of vanillin and damp oak character to the beer. Signature leathery funk and citrus. But ultimately, this was a bit surprising in terms of its relatively mute mineral funk- I am usually used to a big lemony funk from Drie Fonteinen's other offerings.

Flavour does make up some ground here- big lemony acetic acidity, leathery funk, damp oak, vanillin, touch of sharp sherry (but not dark fruit), bit of cobweb, mild-moderate acidity, even a dab of barrel-forward acetone. Really nice complexity to it with the presumed mild oxidation (I'm guessing that's what the sherry-like flavours are from). A good amount to unpack here. I'm not really getting any distinct honeyed sweetness here.

Mouthfeel is medium bodied, fairly dry- in fact, I found this to be drier than the standard 3F OG- this could be because of the honey which perhaps fermented out completely- not sure. Either way, good carbonation, mildly prickly and dry but settles down as it warms up. Good complexity, fairly dry as stated previously.

Overall, an interesting treat. I think the honey ultimately adds a fair bit of dryness and the extended aging time on this beer gave this a bit more of a minimally oxidized sherry character. The citrus brightness that I have come to love from Drie Fonteinen was pushed to the background here, presumably for both of these reasons. It's different, not in a bad way- don't get me wrong- it just doesn't get to the signature Drie Fonteinen bar that the Oude Geuze Vintage label has long established for me here.

375 mL bottle. Hazy orange with a big fluffy white head. Very foamy. Smells of a soft oakiness, a bit of citrus, dried grass, and carbonation. Tastes of oak, citrus, lots of carbonation, slight sweetness to the malt flavor, but it isn't honey. Sourness builds into the back end. High carbonation, but it isn't tingly. Medium body. This reminds me more of regular Oude Geuze than the Armand & Gaston that it is labeled as.

Appearance: A clear dark orange, copper colour with a three finger off white head that had great retention and thick stick lacing.

Mouthfeel: Light to medium bodied with soft to moderate carbonation.

Overall: Another amazing lambic by 3 Fonteinen. Just so enjoyable and relaxing to drink.

Deep 3f funk and minerality. It tastes much older than it is. Lemon citrus and wet oak. The honey is honestly hard to find. It is a bit sweeter but not much.

This reminds me so much of ogv. Very nice. Just nothing different (which is fine). Well done.

The beer is a blend of 1 year old and 2 years old lambics fermented with linden honey. Honey is added during the cooling at a temperature of around 80°C.
Sampled at LambicOdroom, generously offered by Werner. As far as I understand, this should be available for on site consumption only in a near future.
A: Pours the same as the regular oude gueuze except for the foam which is really impressive, vivid, massive and long lasting.
S: No honey from the smell, but the flavors from the regular oude gueuze. I don't get either the fruity flavours from the Armand & Gaston, whereas it's made with 3F lambic only (though it doesn't contain 3 years old lambic). Yet, it has the mineral signature from the best 3F blends. Also very funky.
T: Taste is not very different from the oude gueuze either, rather the same on steroids. It's strong and bold, long lasting with some bitterness on the finish (it's not very sour for the style). The taste highlights hay, barnyard, minerals and light citruses. There is not a single trace of residual sugar in the taste.
M: The mouthfeel is exceptional, with a rather vivid carbonation and a creamy sensation on the tongue and palate. The body is very strong for the style, but the beer is perfectly refreshing and dangerously drinkable (I don't know the alcohol content which I suppose must be higher than the oude gueuze, but it's not perceptible).
O: Very good beer and funny experiment. It seems that the lambic has eaten all the sugar from the honey, not even letting the flavors of the lime honey come through but the result is an oude gueuze on steroid with an impressive mouthfeel.
We had a '12 OGV just after that (which is an excellent vintage), and it seemed somehow watery after the honey lambic!
I'm glad 3F now has the ability to start new projects with its new location in Lot. I hope I will see other experiments like this one in the future!

Oude Geuze Honing from Brouwerij 3 Fonteinen
Beer rating: 92 out of 100 with 32 ratings